Welcome to Noticed, in which we spot connections among, within, and without the walls of the museum.

The last few years in Seattle, it’s been the talk of gardeners, naturalists, parkgoers, and urban dog walkers alike: What’s up with all these rabbits everywhere?

That question was also the headline of a recent feature in the Seattle Times’ Pacific NW Magazine, in which reporter Brendan Kiley investigated the seeming population boom across Western Washington of the Sylvilagus floridanus, or Eastern cottontail rabbit. His journey brought him to the domain of one very special rabbit: King Bunny.

That’s the name given by SAM staff to a particularly large, healthy, and seemingly prolific rabbit who resides in the Olympic Sculpture Park with his many friends and offspring. Kiley spoke with SAM’s Facilities and Landscapes Manager, Bobby McCullough, about King Bunny and Co.’s frolics around the nine-acre sculpture park, where they chomp on grass and clover, attempt to avoid predators and excited leashed dogs, and, we hope, enjoy the monumental sculptures that fill their home. King Bunny can be tough to spot, so don’t miss SAM’s latest installment of “Botany with Bobby,” our TikTok series exploring the sculpture park, in which Bobby tracks his friend down for all of us to see. McCullough also shared his perspective on what to do—if anything—about their increased presence.

“The park’s S. floridanus population has spiked in the past three or so years, McCullough says, and bunny-noticers have divergent attitudes. Some feel protective, calling for a gardener to ‘Do something!’ if they find a rabbit half-chewed by a raptor. Others regard the critters as a problem, suggesting McCullough set out traps and poison bait. ‘As long as I’m working here, that won’t happen,’ he says. ‘I get more joy from seeing them sunning themselves on the grass than frustration at chewed-down fern fronds.’”

McCullough’s live-and-let-live approach to the rabbits must have had an effect, because once we started seeing bunnies around the sculpture park, we noticed that they were simply…everywhere. Back indoors at the Seattle Art Museum, local artist Anthony White celebrates his Betty Bowen Award win with his solo exhibition, Limited Liability. The artist is known for his densely packed compositions that he painstakingly “paints” with PLA (a melted biodegradable plastic, primarily used for 3D printing). Crammed with recognizable products, name-brand logos, and digital logos, they pull you down the rabbit hole of our increasingly intertwined analog and digital lives. They’re also a few literal rabbits dotting these Y2K-nostalgia landscapes: a self-portrait of the artist in the all-too-familiar pose of gazing at a smartphone screen in bed includes a number of bunnies hopping around his aura like phantoms; up above is a ransom-note scrawl saying, “SILLY RABBIT, YOUR IPHONE STORAGE IS FULL.” And the smallest painting in the exhibition hangs above them all at the entrance like an idol: An Energizer Bunny seen behind a cracked cell phone screen, questioning the relentless pursuits of capitalism.

Of course, bunnies aren’t always harbingers of doom. Kiley’s story also notes the diverse cultural meanings of rabbits: “Old stories characterize the rabbit as arrogant (Greece), cowardly (Tibet), a great warrior (China), tricky (lots of places) and prototypical prey (lots of other places).” He notes their association with fertility in early Christian Europe and their appearance as a resilient “catch-me-if-you-can” figure in Puget Sound stories of Snoqualmie, Puyallup, Muckleshoot and other traditions. SAM’s global collection is a veritable rabbit hunt; one work on view right now at the Seattle Asian Art Museum is a beloved late 19th-century Japanese netsuke of an ivory hare (we know, it’s technically a different species, just go with it) with real amber eyes. Barely an inch all around, it’s a noticeably smaller presence than King Bunny, and it’s not as difficult to spot as it’s protected in a glass case, but in its tiny form and glittering eyes it makes a charming and surprisingly powerful impact. We think it’s wise to keep a close eye… just in case.

“It’s my happy place,” says White. “It’s nice to have a space that’s reserved only for creating art.”

White spends most of his days in this space. It’s quiet and personal, with an ever-rotating array of his creations adorning the walls. It’s here that many of his completed artworks sit before they’re delivered to their next—or final—destinations. In the back corner sits a small desk, a focused space where White first sketches his paintings. Pink, brown, blue, green, purple, yellow, and more, endless rolls of polylactic acid—White’s medium of choice and the same material used in the 3D printing process—occupy the other corner, adding a pop of color to the room. A black leather couch hides next to the door, a place for guests to sit, talk, model.

“I don’t have many guests,” says White. “It’s only when I’m collaborating with someone or asking a friend to model that someone else is in here with me. Otherwise, it’s just me and my art.”

Where White spends the most of his time, however, is in the center of the room. With an unfinished canvas sitting on a sawhorse, it’s here that White paints. With his headphones in, White will work anywhere from eight to 10 hours a day. Circling the canvas, he is precise and careful with each line of polylactic acid he paints.

From his studio to museum walls, experience Anthony White’s breathtaking artwork on view in Anthony White: Limited Liability at SAM’s downtown location through January 29, 2023. Meet the artist and hear from him in SAM’s galleries on Thursday, September 15 at 6:30 pm as we celebrate the opening of White’s first solo exhibition at SAM. There’ll be a public reception in the Susan Brotman Forum with a bar and music by Seattle’s own DJ Housepartysea. Reserve your tickets to this free event—space is filling up fast! 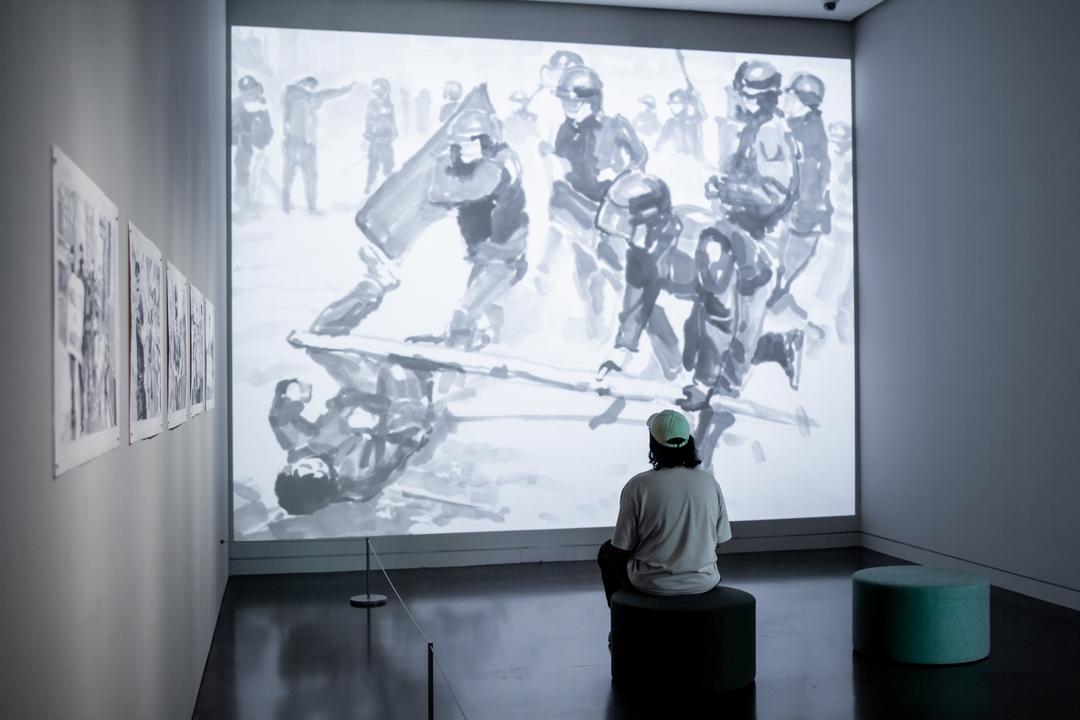 “The immersive, multimedia exhibition is small—a casual viewer could survey the handful of pieces in minutes—but it’s one that rewards a more thoughtful approach, revealing new layers and details the longer you look. Each artist relates classical forms with timely themes, addressing topics from street protest to quarantine.”

“I love that there’s so many symbols in it, so many things that you can decode. You can kind of keep coming back to the work. I kind of compare it to being like a digital era archaeologist.”

Lonely Planet’s “8 best beaches in Washington State” includes the pocket beach at the Olympic Sculpture Park, noting that “at low tide, you (and the kids) can explore tidepools brimming with marine life, from sea stars to chitons, all within view of the Space Needle.”

SAM Remix: The clouds didn’t keep you beautiful people away! We were thrilled to bring back the late-night art experience to the Olympic Sculpture Park last Friday–and thrilled for the shoutouts from The Stranger, The Ticket (new site alert!), Seattle Met, and Seattle Times.

“Here’s what it’s like to walk around Lake Washington in a single day”: A recommendation for a Very Long Walk by Paul Constant for the Seattle Times.

Patheresa Wells for South Seattle Emerald on YOLTEOTL Press, an Indigenous printmaking and traditional arts studio that will open in Ballard in early September.

“Where Art Tastes Like Himalayan Blackberries and Lemon Balm”: Jas Keimig of the Stranger on the outdoor art-tech show AUGMENT Seattle and the standout AR piece by Nina Vichayapai (whose work was also part of SAM Remix last Friday!).

“What’s delightful about the piece is that even though the garden of PNW plants is virtual, it still grounds me in reality. Vichayapai’s personal rendition of Seattle’s summer made me think about the foliage and smells and textures I associate with the season.”

Via Elaine Velie for Hyperallergic: “The Fascinating Things People Leave Behind in Library Books.”

“Why Is It So Hard to Find ‘Ethical’ Cardboard?” Janelle Zara for Artnet on the monopoly in art-world shipping.

Christina Morales of the New York Times invites you to meet Gerry Kulzer, the new butter sculptor at the Minnesota State Fair.

“Mr. Kulzer, an art teacher at Eden Valley-Watkins High School who specializes in sculpture, spent two years shadowing Ms. Christensen in order to learn the intricacies of working with cold butter, which is harder to manipulate than the soft-water-based clay he’s accustomed to…Teaching is the second-best job in the world, he said. ‘The first is carving butter heads.’” 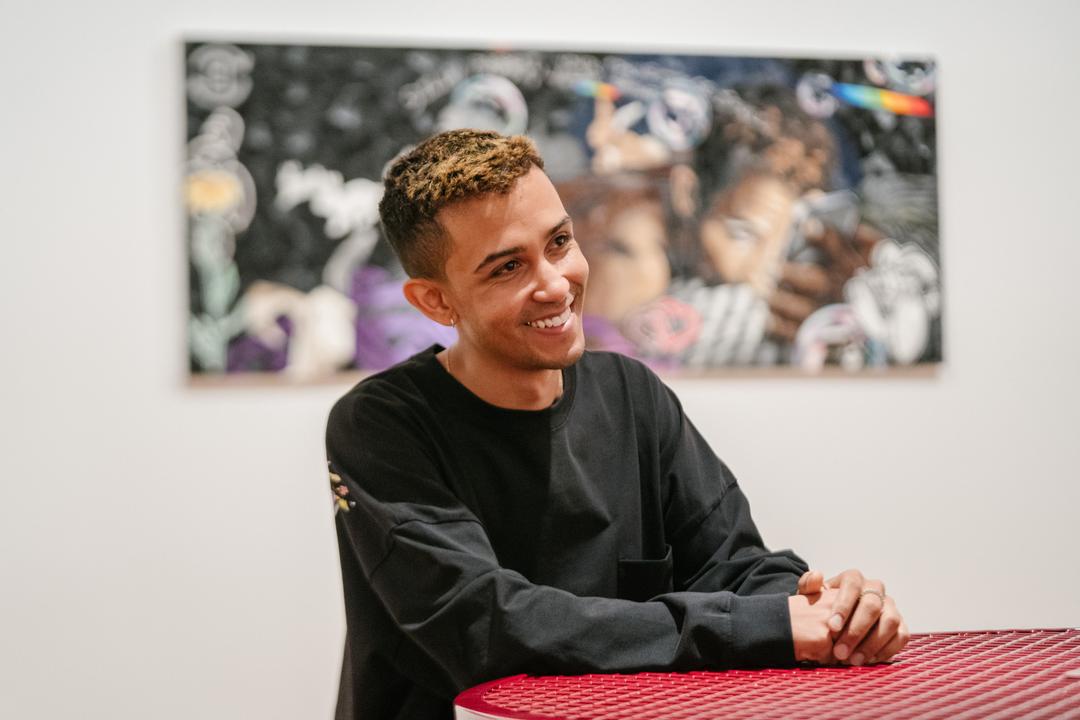 “A dizzying tapestry of our digital world”: Margo Vansynghel wrote about Anthony White: Limited Liability, the artist’s solo show at SAM as part of his 2021 Betty Bowen Award win. ICYMI: Head to SAM’s Instagram to experience Anthony’s “brain on art” as he took over our Instagram stories last week!

The Seattle Times arts team helpfully gathered all the “ways to stretch your entertainment dollars in the Seattle area” with free or discounted tickets and events. They mention the free days at SAM’s three locations—Seattle Art Museum (First Thursday!), Seattle Asian Art Museum (Last Fridays!), and the Olympic Sculpture Park (365 days a year!)—as well as other hot tips for free or discounted admission. Now, go ART!

Though the exhibition was no longer on view when Savita Krishnamoorthy’s International Examiner review of Embodied Change: South Asian Art Across Time was published, it’s still very much worth a read. And you can still see Chila Kumari Singh Burman’s neon installation Kali (I’m a Mess) in the Seattle Asian Art Museum’s park lobby.

“We are witnessing an aspirational South Asianfuturism, dreaming of a world without war and human suffering.”

Capitol Hill Seattle Blog on Soft Services, a site-specific installation of inscribed stones by Brooklyn artist Chloë Bass that has taken up residence throughout Volunteer Park.

The Seattle Times’ Jayce Carral on a new exhibition featuring photos and memories from the region’s farmworker families. All The Sacrifices You’ve Made / Todos los Sacrificios Que Has Hecho is on view at Tacoma’s Washington State Historical Society until October 16.

“‘You felt a sense of community in the fields because it was people talking your language, people hearing the kind of music you hear at home, people eating the foods you eat,’ [Exhibition subject Luz] Iniguez said. ‘It really felt like a community of people that were just working hard trying to make the most of a situation that was hard.’”

“The highest aesthetic and technical achievement in fashion”: That’s a Met Costume Institute curator on Issey Miyake’s designs; the groundbreaking Japanese designer has died at age 84. You can see three examples of his work right now at SAM in Folding Into Shape: Japanese Design and Crafts.

Via Sarah Rose Sharpe of Hyperallergic: “Best Museum Bathrooms in the US, Ranked.”

Arthur Lubow for the New York Times on a five-screen film installation by Isaac Julien now on view at the Barnes Foundation that “looks at the place of African art in the Barnes and other Western museums.”

“‘I’m calling this the poetics of restitution, which is something I’m trying to explore in the work,’ Julien said in a telephone interview from London. ‘The debates that we’re having today that seem contemporaneous were happening 50 years ago, if not before. I think that’s really interesting.’”

Art But Make It Sports.