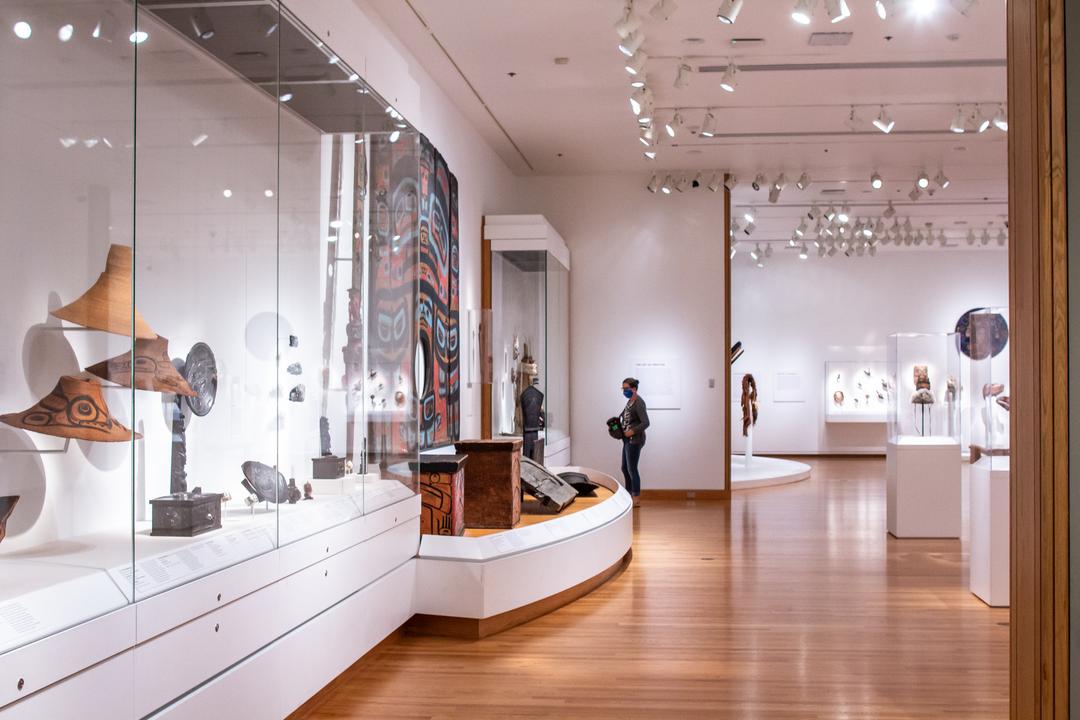 Introducing #SAMSnippets! We recently launched a new live series on our Instagram which gives followers an in-depth look at works from SAM’s permanent and semi-permanent installations virtually. Each month, we’ll choose a new gallery to walk viewers through, providing a taste of SAM from wherever you may be!

To kick off the series this November, we featured a diverse collection of artworks from “Native Art and Life Along the Northwest Coast” in celebration of National Native American Heritage Month. Watch the video now to get a peek at what’s on view at SAM now and read about the works shown in this video below. Visit SAM now to see all of the featured works and more in-person!

Masks of the Animal Kingdom Dance

As we enter the galleries on this short walkthrough you’ll see an installation of masks arranged on platform. Performances featuring masked dancers are birthright of particular families and derive from long-ago auspicious encounters between human ancestors and supernatural beings, in the guise of animals or unique spirits. The “Dance of the Animal Kingdom” represents a heroine ancestor’s adventures among the animal beings, who in turn bestow the dance and masks upon her for use by her family and subsequent generations.

According to Chief Bill Scow (1902–1984), the Animal Kingdom story took place at Shoal Harbor (Gilford Island, British Columbia) where in the distant past a girl went looking in the woods for her lost brother. She instead encountered a dance of animal beings inside a cave. The messenger of the animals, Mouse Woman, was sent to see if there was indeed an intruder. Because the girl was able to overcome the supernatural power present in the animal dance, she was allowed to witness it and to bring to her people the privilege of performing it. The masks shown here were carved by artist Sam Johnson (1930–2007) for the opening ceremonies of the Seamonster House at the Pacific Science Center in 1971.

As we pan across the arrangement, keep an eye out for Deer, the “curious one,” recognizable by its antlers. You’ll also see Owl, called the “Wise One” perhaps because its large eyes see deeply into the real and spirit worlds. Its distinctive markings, rotating head and binocular vision, put the owl in the pantheon of auspicious creatures. George Hunt (1854–1933), a knowledgeable First Nations consultant to anthropologist Franz Boas, recorded that some Kwakwaka’wakw believed that after death man becomes an owl.

According to Bill Scow, one of the heirs of the Animal Kingdom privilege, Wolf was the leader of the animals and would call them out one-by-one to pantomime the characteristics of each creature. After all the animals had danced in sequence, they would dance together as a group for the finale.

Raccoon, as keeper of the fire, would have been in charge of illuminating the sacred cave where the Animal Kingdom Dance first took place.

Because of her speed and sharp mind, Mouse Woman is sent out to make sure no one is watching the secret dance of the animals. In the story, she befriends the girl and tells the others that no one is watching. In time, the girl is allowed to observe and to take the supernatural treasure of the dance and masks back to her family.

Grizzly Bear is the “fierce one” and can be identified by his upright ears, large snout, and moveable jaw.

The presence of Bukwus in the Animal Kingdom Dance may be a reference to the lost brother that the girl was seeking. Bukwus are feared ghost-like creatures believed to represent humans who have become separated from their community and wander the woods. In the story, the brother loses his human identity and becomes a Bukwus.

Kingfisher is said to be the assistant to Wolf, the leader of the animals. In the wild, they are stocky birds with a shaggy blue crest who fly quickly over rivers and shorelines looking for fish. Their rattling cry and expert diving abilities make them special and mysterious creatures.

Now we turn to historic and contemporary works created by Native peoples across the Northwest Coast. The first work in this collection, Seated Human Figure Bowl, portrays a skeletal humanoid figure cradling a bowl in its lap, with its arms and legs encircling the bowl. Three distinct snake images are carved downward from the head, resembling a headdress with two footprints on top. Bowls such as these, carved from stone, wood, and horn, are often used by Coast Salish peoples in rituals of healing and protection.

Next to the bowl sits a Sxwaixwe Carving. The unusual being depicted in this carving is used in Coast Salish communities to bless and protect people in life crisis events, such as sickness and death. Only the right person with the right to use the masks would know its deeper meanings. This small carving might have once been the finial of a rattle or the top of a staff.

Also in this collection, we see two Skull Rattles. The imagery of these two works reveals the death-and-rebirth aspect of initiation into the t’seka or Winter Ceremonial whereby acolytes are temporarily imbued with supernatural power then restored by attendants who shake rattles to tame the wild behavior of the initiate. The subdued initiate is reborn with greater status and connection to spiritual power.

Halibut—giant flatfish that can weigh one hundred pounds or more—were traditionally caught in Tlingit and Kaigani Haida communities from cedar canoes using special barbed hooks. Fishermen used imagery that referenced the help of a shaman. This Halibut Hook (Naxw) which is then panned to represents a human figure with animal-like feet biting an octopus tentacle. The octopus appears frequently on shaman charms and is considered to be a supernaturally powerful being.

The importance of shamans, called halait, as powerful spirits which aid in combatting sickness and soul loss in Native communities along the Northwest is reiterated in the next work featured in the video, Soul Catcher (Am’halait). This special amulet of bone, abalone shell, and buckskin is a container that was manipulated while the shaman was in a trance, in order to locate and retrieve the wandering or bewitched soul of a person, thus restoring their health.

Small carved shaman figures such as the one which is next panned to, represent spirit helpers and were part of the myriad curing paraphernalia employed to purge ill persons of evil spirits. Objects such as these would protect the shaman against supernatural enemies while completing his healing duties.

To the right of this shaman figure, we see a venerable ceremonial garment. Xoots Kudás displays a bear on one side and a stylized design of bull kelp on the other, both crests of the Tlingit clan. The crests are held communally and symbolize ancestral encounters with supernatural beings. Such regalia is considered to be at.óow (“an owned or purchased object acquired through an ancestor”), one of many traditional art works brought out on ceremonial occasions to signify the connection between the ancestors and the living.

Leaving the glass case of Northwest Native works, we pan to two pedestals with works highlighting the importance of Raven in Tlingit communities. The first, Raven at the Headwaters of Nass Hat (Naas shagi Yeil S’aaxw) was used in Alaska to comfort those in mourning. Clan hats are the ultimate expression of complex shared histories and are featured prominently in potlatches. When the song associated with the hat was sung, the host family and guests—ritually dressed in headgear and robes—would dance in remembrance of their loved ones.

The second work is a stunning combination of maple, mirror, abalone shell, bird skin, paint, sea lion whiskers, copper, leather, and Flicker feathers. According to myth, the distinguished natural features of Tlingit homelands can be attributed to Raven. Lkaayaak Yeil S’aaxw (Box of Daylight Raven Hat) depicts the wily Raven in the act of releasing the sun, moon, and stars from his grandfather’s box, which the legendary bird clutches in his human-like hands.

Behind these pedestals, we see Keet Shagoon (Killer Whale) by Tlingit artist Preston Singletary. Growing up in west coast cities and trained in European glass techniques and practice, Singletary began incorporating Native Iconography into his work in 1987, explaining: “I found a source of strength and power [in Tlingit designs] that brought me back to my family, society, and cultural roots.” In this, his first monumental work, the artist studied the house screen in this gallery, fusing his clan Killer Whale crest into sixteen panels, thus recharging an ancient tradition and bringing the past forward. Learn more about this artwork featured in SAM’s Object of the Week series.

The tour concludes with Robert Davidson’s Canoe Breaker: Southeast Wind’s Brother. According to Haida oral traditions, Canoe Breaker is one of ten brothers of Southeast Wind, who is responsible for the turbulent weather on Haida Gwaii. You can learn more about the story behind Canoe Breaker in this highlight as SAM’s Object of the Week.

“Southeast Wind is in the form of a killer whale. The [white] ovoid actually separates the lower teeth from the upper teeth in the mouth. And the top shape would be the tail and this U-shape could be the pectoral fin and dorsal fin. When you see the killer whale in their world we see them as killer whales but when…they go into their dwelling [below the sea] they will take off their skins and hang it near the door..so that’s why…human attributes [are] mixed in with what a killer whale looks like.”