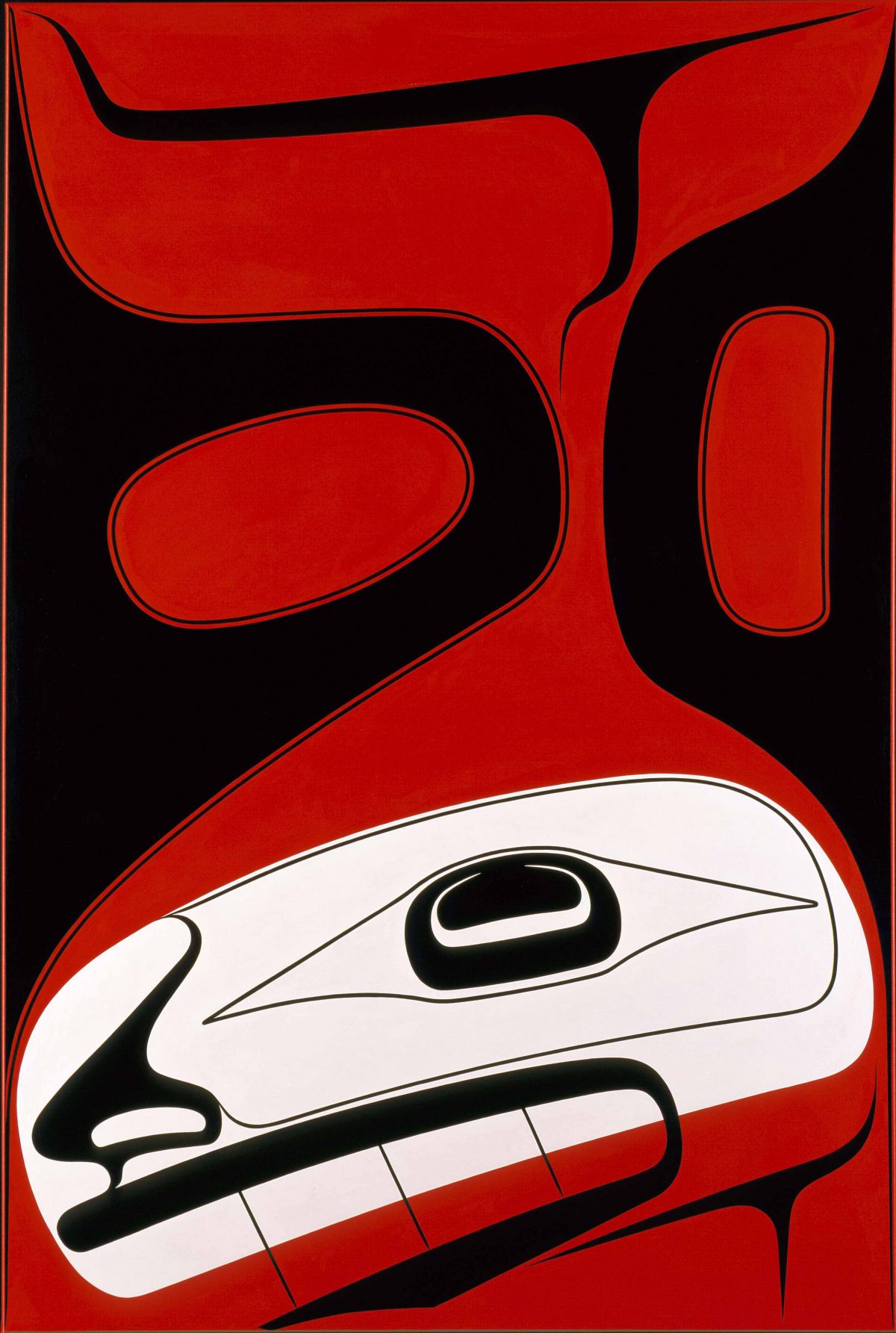 I draw on the lessons of our ancestors. Our ancestors left an incredible legacy of art and, in order to honor them, it’s our responsibility to relearn that legacy, whether it’s through the art, whether it’s through the song, or through the dance. When people would travel to the mainland, there’s this incredible body of water that’s very treacherous, and a storm can come up and without warning. And so, before the people crossed the water, they prepared themselves on three levels…. They prepared themselves physically; they would actually practice paddling the canoe. And they would mentally prepare themselves, they would visualize their destination. And creativity is exactly the same thing, you visualize, you get an idea like that. And so, our challenge is to hold the idea and bring it to fruition.

Robert Davidson is arguably one of the most versatile, creative, and visionary artists of our time. Born in 1946 in Masset village, Haida Gwaii, Davidson—countering the effects of colonialism—was able to tap the memories of his elders and help revive ancient Haida art styles, revitalizing the visual heritage of his people.

His story is nothing short of remarkable and has unfolded over 40 years through numerous artworks ranging from wood and metal to paper and canvas; original songs and dances of his Rainbow Creek Dancers; and in public exhibitions, publications, and awards. His masterful feel for cedar, from monumental totem poles to expressive masks, links him to generations of some of the most accomplished artists of all time, including his maternal relative, Charles Edenshaw (ca. 1839-1920).[1] The trajectory of his carving places him among the masters who pushed Haida art to a breathtaking sophistication and refinement.

As his engagement with Haida culture and art has grown and his artistic practice has matured, Davidson has crafted an individual and distinctive approach to abstraction that is grounded in tradition yet expressive of the experiences, intellect, and creativity of an artist in his own time. In the early 1980s, he began to paint largescale paintings in gouache, experimenting with color, composition, and figural abstraction. A decade later, while still engaged with carving projects, he incorporated acrylic painting into his practice, adopting a hard-edge technique that has precision and crispness but retains elasticity and movement. The subjects (he gives us clues in the titles) might refer to personal experiences, musings on Haida art, or legends drawn from the corpus of Haida oral traditions.

Haida Gwaii (formerly Queen Charlotte Islands) is an archipelago of two large and more than 150 small islands that lie sixty miles off the British Columbia mainland. Formed by glacial erosion, floods, tsunamis, and changing sea levels, this cluster of islands sits at the juncture of the Pacific and North American tectonic plates. Here the ocean drops precipitously from three hundred to three thousand feet, creating an environment rich in marine resources and marked by dramatic climatic events, including gale-force winds. In Canoe Breaker, Davidson introduces his audience to a powerful force and its ancient origins: Southeast Wind.

Southeast Wind has ten brothers or, in some accounts, nephews, who are manifestations of his powerful force. John Swanton, an ethnologist with the Bureau of American Ethnology from 1900-1944, recorded a story told to him by a Haida man named Abraham in the winter of 1900 about Master-Carpenter who went to war with Southeast Wind because he was sending too much rainy, stormy weather to the people. After four failed attempts to make a seaworthy canoe, Master-Carpenter succeeds and sets out on his mission. He seizes the matted hair (kelp) of Southeast Wind and pulls him into the canoe. The Wind sends the first of his nephews, Red Storm Cloud, who turns the sky red, followed by Taker off the Tree Tops who blows so hard that tree branches come down around Master-Carpenter in his canoe. Next, Pebble Rattler brings rolling waves that violently toss the rocks and Tidal Wave covers the canoe with water. Other brothers bring mist and melted ice. During all this wind activity, Master-Carpenter is putting medicine on himself that he has brought with him for the task, as Haida travelers and fisherman (since the beginning of time) are keenly observant of the weather—perhaps a metaphor for preparing for the unknown, as in performing a new song or creating an art work.

Southeast Wind is represented in this painting by an image of the killer whale, which becomes human when on land. A human-like nose and eye signal this transformative nature. The large ovoid is its head, and a black three-pointed shape defines the lower jaw. Black U-shapes with red ovals indicate the pectoral and dorsal fins, and the tail is shown at the very top. The entire image is dematerialized without being wholly abstract and shows how Davidson’s art practice moves effortlessly from figuration to abstraction.