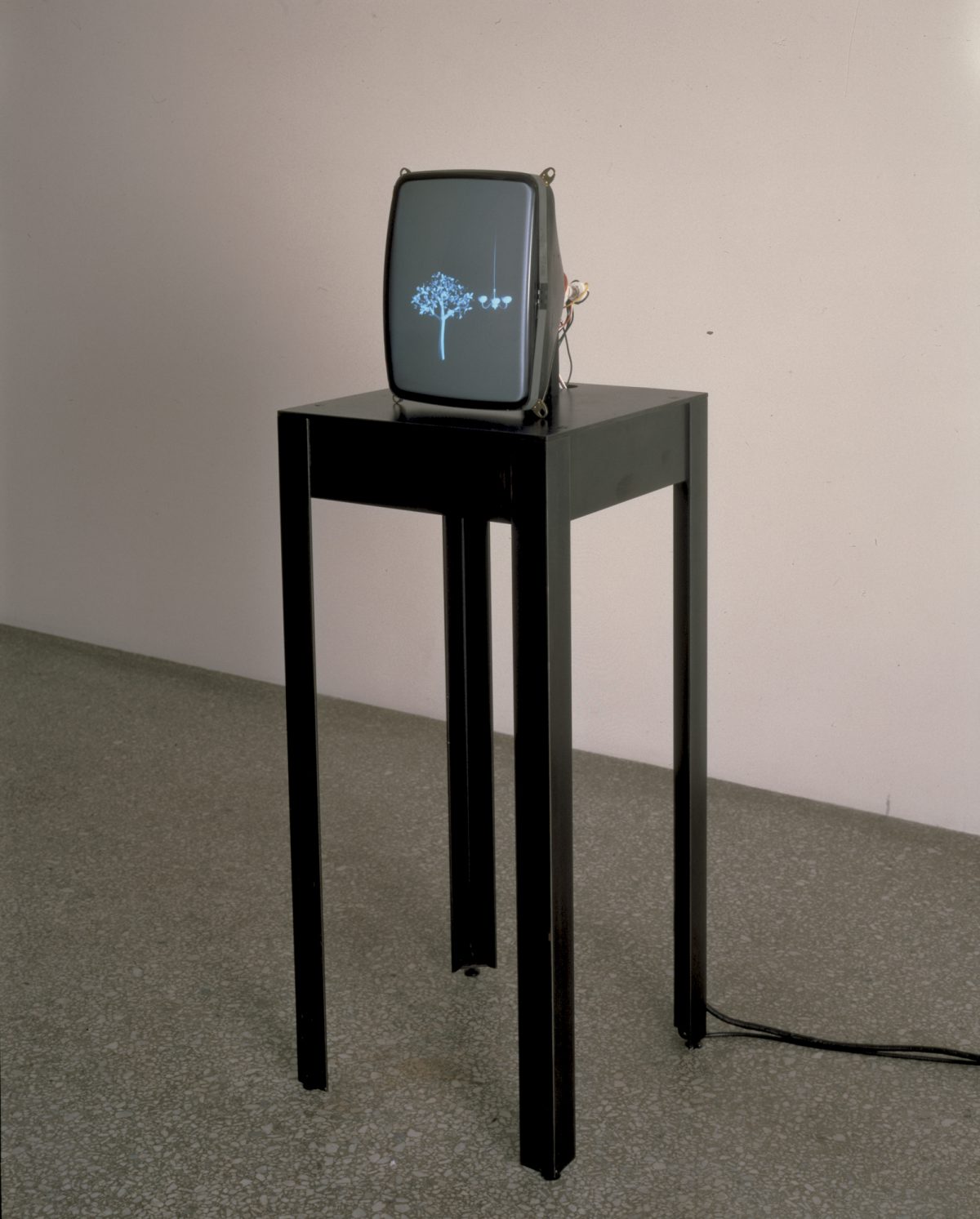 Computer-generated liminal spaces and objects are familiar to video gamers—and maybe more so to those who are just not very good at video games, flailing halfway between a corner, or punching through a character that is more background than plot. These virtually possible in-between spaces become perceptible at the moment a player engages with the limits of a game’s designed environment. In Seattle-based artist Gary Hill’s video installation series Liminal Objects, however, it is within the absence of a designed environment where the computer-generated objects themselves interact, and with disregard for each other’s limits.

Each work in the series shows two black-and-white unrelated computer-generated objects on a 14-inch Cathode Ray Tube (CRT) monitor that has had its housing removed. One object is still, while the other moves back-and-forth and around, indiscriminately slicing the stationary object. In Liminal Objects #5 (1996), it is a stationary tree and a swinging chandelier. Through these shadowless animations, “Hill has avoided the spectacle of computer art and instead embraced the simple fact that the ‘program’ doesn’t care if objects penetrate each other’s solidity.”1 It’s a bit absurd, and in the case of #5, perhaps a touch romantic.

Placing the work among other video art and time-based media of its era, Liminal Objects’ sculptural presence stands out. During the 1990s, contemporary art saw a “cinematic turn,” with a proliferation of large-scale video projection within the gallery space. Video art “forged a link with cinema and its giganticism” as projected images began to engulf entire walls.2 This was a departure from the previous decade, where CRT monitors—the small boxy televisions so different from today’s large flat LCD screens—were the norm (and sometimes only option) for displaying video art. But in the 1990s, many artists sought to loosen video from default connections to sculpture and the domestic in favor of the more immersive experiences that newer technologies could support.

Hill’s Liminal Objects series doubles down on the sculptural qualities of the CRT monitor while also disengaging it from connotations with the domestic: first, by removing the monitor from its casing, thereby “exposing the circuit boards and cathode tubes, and rendering them dangerous and vulnerable sculptural objects;”3 and second, as in Liminal Objects #5, by placing the monitor vertically atop its small steel table. All of these works would originally use laser disc to play the video loops, a common format for video art at the time due to laser disc’s accuracy for synchronization and potential higher quality as compared to tape-based formats.

Engaged in a silent loop, the tree and chandelier of #5 act as ghost-like semaphores: “a compositional practice of electronic linguistics.”4 But in thinking through the considerable questions for how to continue to display such time-based artworks in the future, another riff on ‘liminal’ comes to mind. “[L]iminal or borderline states are anywhere that something is about to undergo a phase transition or turn into something else.”5 As we all know, formats will become obsolete and technology will fail (just look to your smart phone). CRT monitors are not as easily sourced today and the laser disc has long been eclipsed by the digital file.

That time-based artworks can potentially inhabit future hardware, software, and display mechanisms without losing their inherent meaning, highlights a certain liminality too. How will artists like Hill and tomorrow’s conservators imagine the “phase transition” of these works into the future?

2 Laurenson, Pip, “Developing Strategies for the Conservation of Installations Incorporating Time-Based Media with Reference to Gary Hill’s Between Cinema and a Hard Place,” Journal of the American Institute for Conservation, Vol. 40, No. 3, 2001, pp. 259-266: p. 261.

3 Laurenson, Pip, “Developing Strategies for the Conservation of Installations Incorporating Time-Based Media with Reference to Gary Hill’s Between Cinema and a Hard Place,” Journal of the American Institute for Conservation, Vol. 40, No. 3, 2001, pp. 259-266: p. 261.