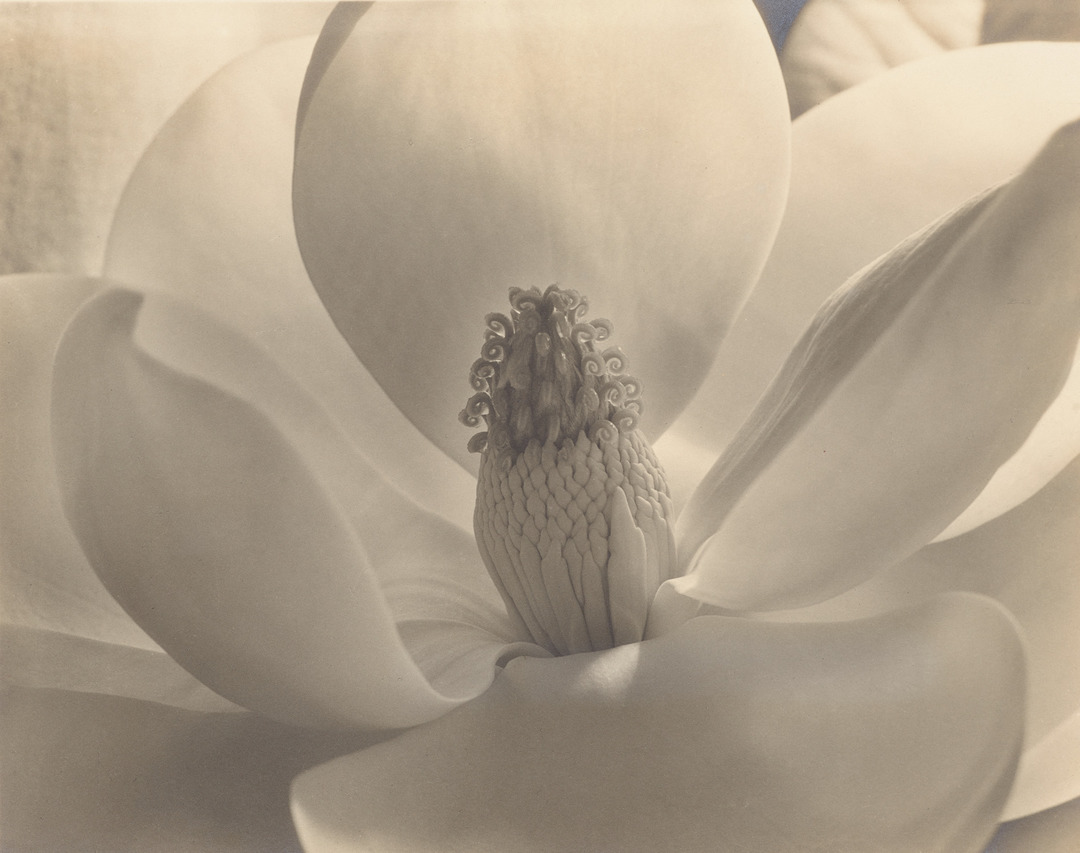 For nearly a decade of her 70-year career, Imogen Cunningham focused on capturing the beauty of botanicals. Having studied chemistry and worked in the botany department at the University of Washington, she wrote her thesis in 1907 on the chemical process of photography while employing a variety of plants as her subjects.

Magnolia Blossom is perhaps Cunningham’s most well-known botanical image. The close-cropped photograph of the flower reveals the cone of stamens and pistils hiding between the petals. Taken as a whole, the image represents a transfixing study of light and shadows within the history of black and white photography.

In this audio recording produced by the J. Paul Getty Museum, Meg Partridge, the granddaughter of Imogen Cunningham, discusses the significance of this photograph within Cunningham’s larger body of work and provides insight on the photographer’s fascination with botanicals. Tune in to this and twelve other recordings as part of the free smartphone tour of Imogen Cunningham: A Retrospective when you visit the Seattle Art Museum.

Narrator: This close-cropped image of a magnolia flower fills the entire frame. The petals have completely opened revealing the cone of stamens and curlicue carpels.

Narrator: For roughly a decade, Cunningham focused her attention on botanical studies. This is perhaps her most well-known example. She had an extensive knowledge of plants—as a chemistry major in college, she worked in the botany department, making slides for lectures and research.

Meg Partridge: She knew the botanical names of all of the plants that she had photographed and all the plants that she gardened with. She spent a good bit of time in the garden. So I think it was more about the relationship she had with her subject—be it a person or a plant—that we really see and respond to.

Narrator: There was a practical aspect to these botanical works as well. Cunningham once explained: “The reason I really turned to plants was because I couldn’t get out of my own backyard when my children were small. I photographed the plants in my garden and steered my children around at the same time.”

Meg Partridge: And she would do it in moments where she had children underfoot, but also a moment to focus. She always used natural light and she often took photographs either inside with a simple backdrop or she even took simple backdrops, a white board or a black cloth, out into the garden to photograph.

Narrator: Cunningham’s full-frame botanicals such as this one were groundbreaking in early modernist photography.