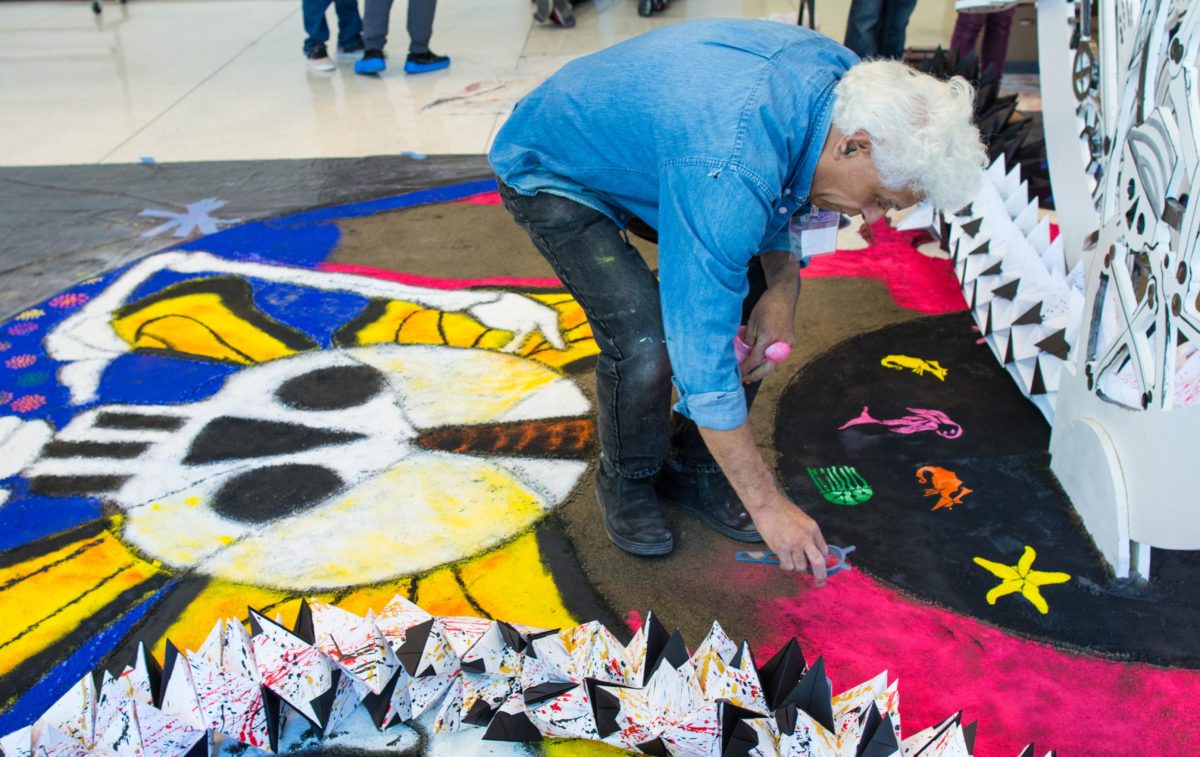 Frisson: The Richard E. Lang and Jane Lang Davis Collection is now on view at SAM! Before you head to the galleries, check out the tapete (sand painting) by local Oaxacan artist Fulgencio Lazo in the Brotman Forum. ParentMap includes it on their list of Día de los Muertos happenings around the region.

Erica Browne Grivas for the Seattle Times with photos and an itinerary for a mural walk starting at Pike Place Market and winding to Belltown.

Crosscut’s Margo Vansynghel on supply chain issues and their impacts on the local art world. Yep, it’s impacting SAM: we are waiting on the arrival of beautiful catalogues for Barbara Earl Thomas: The Geography of Innocence. Stay tuned for updates!

Also in Crosscut and also about Barbara Earl Thomas: Vansynghel wrote about great alternatives to certain heavily promoted “immersive” experiences, such as Thomas’s work, which is also on view at the Henry Art Gallery alongside the work of Derrick Adams.

“As music by Dionne Warwick, Prince and Anita Baker plays overhead, a rotating lantern in the heart of the gallery casts cut-paper images across the room’s bare, white walls. The technique recalls the earlier magic-lantern work of artists Auguste Edouart and Kara Walker. But here, there are no silhouetted people, only abstracted monochrome shapes of cut fabric patterns (Adams) and stained-glass-like cutouts of an Afro pick and a cinderella shoe surrounded by roses (Thomas).”

Shanti Escalante-De Mattei for ARTnews on the National Gallery of Art’s first acquisition of a work by Faith Ringgold, a 1967 painting entitled The American People Series #18: The Flag is Bleeding.

Sarah Rose Sharp for Hyperallergic on the Ford Foundation’s announcement of a $50 million dollar investment in their Global Fellows program; among the 48 new fellows are seven artists and storytellers.

Gorkys on Gorkys: Ted Loos for the New York Times on the incredible discovery of a new Arshile Gorky painting hidden beneath one of the artist’s famous paintings.

“Slowly we were able to see the edges of ‘Virginia Summer,’” Mr. Masson said. “After numerous discussions with the owners, we started to go further and we realized that there was oil paint covering the whole canvas. It’s the first time we realized it’s not a sketch, it’s more.”