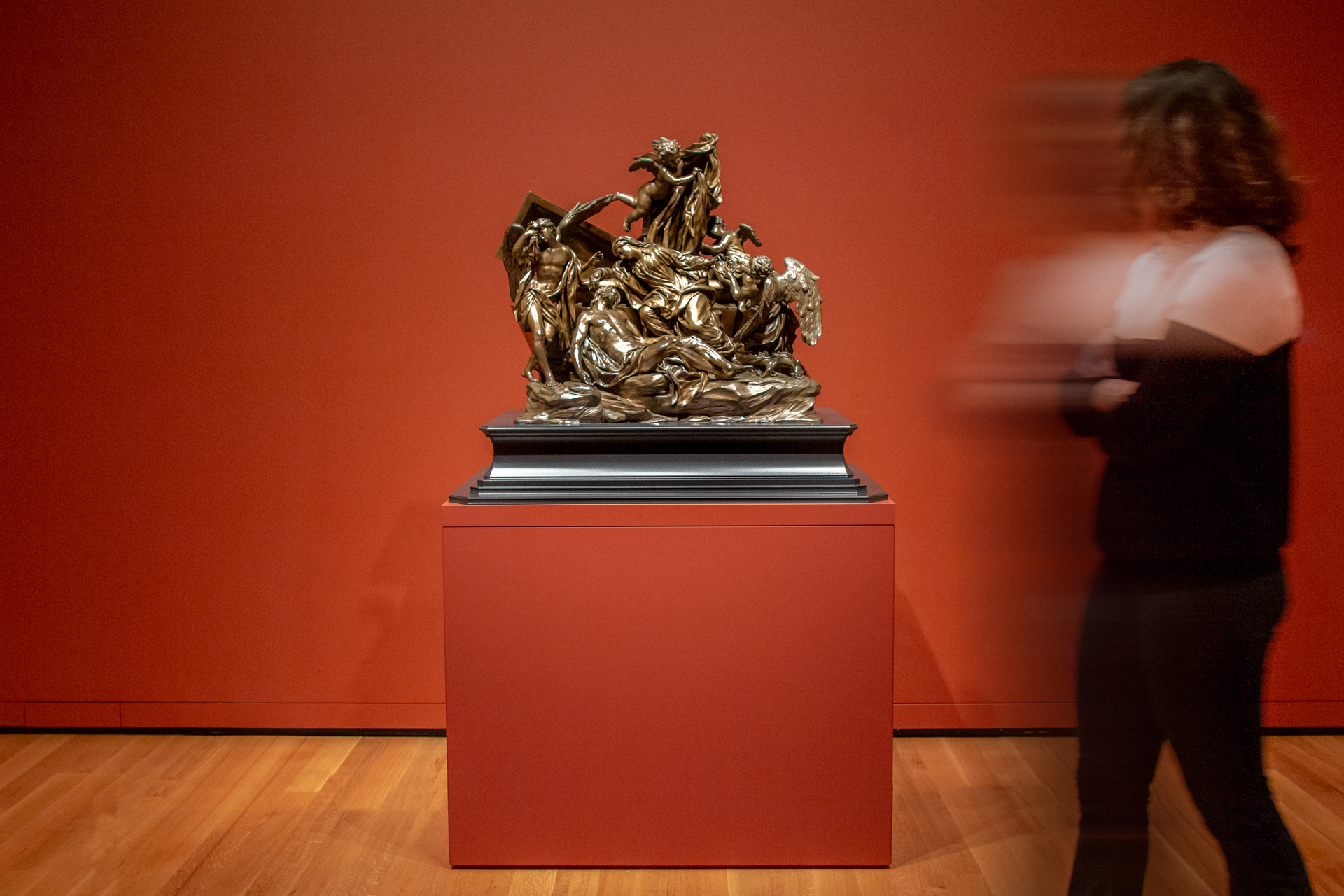 SAM’s intricate and stunning sculpture of The Lamentation over the Dead Christ by Massimiliano Soldani Benzi is currently on view in Body Language, but wouldn’t be if it weren’t for a years-long project that restored the piece to its former sheen. To make this possible, our conservators worked with a team at the Museo Nazionale del Bargello in Florence, the original home of the sculpture. See images from the process and find out more about the conservation process from our conservators before you see this sculpture in person.

Massimiliano Soldani Benzi’s bronze sculpture The Lamentation over the Dead Christ (SAM 61.178) was cast in 1714 and acquired by SAM in 1961 as part of the Samuel Kress Collection. SAM’s Head of Conservation, Nicholas Dorman, led a multi-year fundraising campaign to study and treat the sculpture. Completed in December 2018, the project encompassed three broad goals: analysis of the surface and cleaning, replacing the lost crown, and constructing a new period-appropriate base.

The sculpture was loaned to the Museo Nazionale del Bargello in Florence in 2017, where it was featured in Making Beauty: The Ginori Porcelain Manufactory and Its Progeny of Statues. The exhibition discussed the relationship between Soldani and the Ginori Porcelain studio: after his death, Soldani’s heirs sold some of his wax models and molds to Mr. Carlo Ginori, who reproduced them in porcelain at his Florentine workshop. The bronze Lamentation over the Dead Christ was displayed next to its porcelain cousin for the first time, both having been cast from the same approximately 56 molds.

The Bargello exhibition was an opportunity to study and document the various layers of degraded, non-original surface coatings—a mixture of black-brown pigmented wax and oils—with Florentine conservator and metals specialist, Ludovica Nicolai. Nicolai has worked on a great number of Soldani’s works in the Bargello collection. In collaboration with Nicolai and SAM’s conservation department, scientific analysis of the coatings was executed by a team of scientists from Adarte, Pisa University and Florence University, in order to inform the cleaning approach. Over four months, solvent gels were used to soften the hardened coatings, followed by cleaning with dental tools and the flexible tips of porcupine quills to gently remove the non-original layers from the surface.

At the conclusion of the treatment, a stylistically appropriate wooden base was constructed—whose form echoes the porcelain version in the Bargello exhibition. This replaces the modern stone mount on which it has been previously displayed.

This project was a truly international collaboration. As well as the experts mentioned above, we are particularly grateful to Dr. Paola D’Agostino and Dr. Dimitrios Zikos and their colleagues at the Bargello for their abiding support and for being so generous with their knowledge. To conserve a sculpture like this in its original place of creation is a significant funding challenge, and we wish to thank the Samuel H. Kress Foundation, The Museo Nazionale del Bargello, SAM’s Plestcheeff Fund for Decorative Arts, an anonymous foundation and an anonymous individual donor. Thanks to their support, we can present and share the story of this magnificent Florentine baroque sculpture.