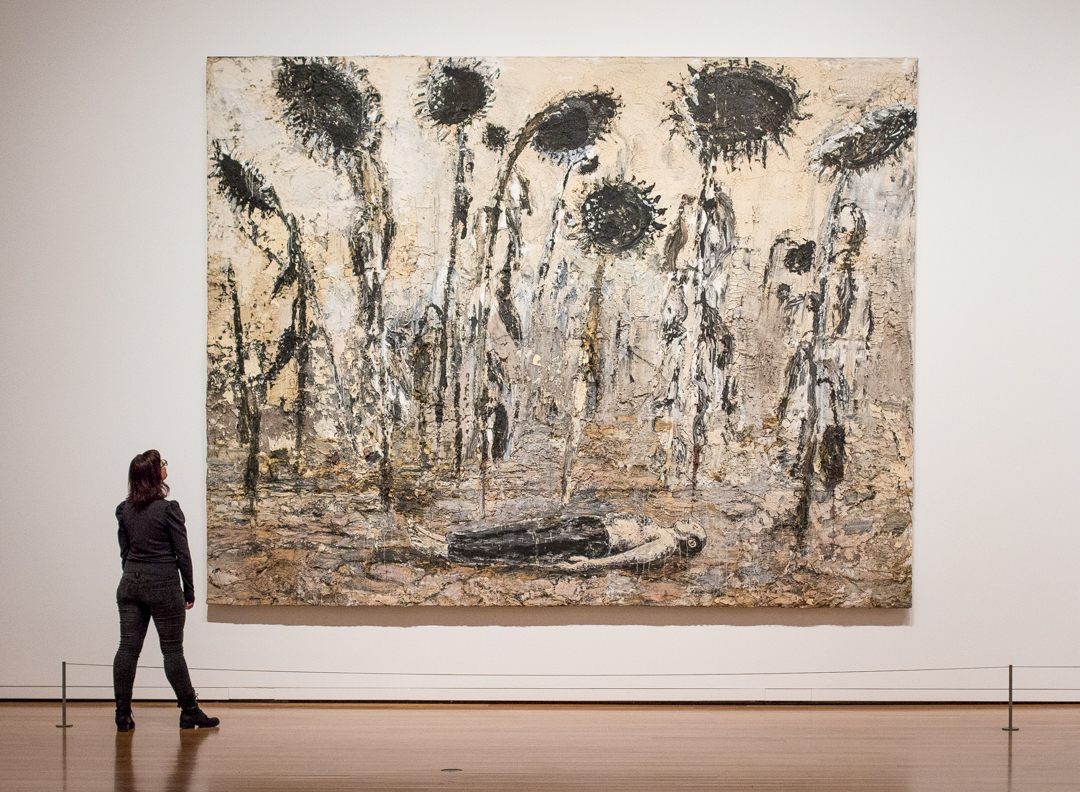 At times an artwork has so much to say that I approach it and, admittedly, fail to meet the challenge. I’m not able to engage with the artist at the intellectual height or emotional depth that they have established in the piece. I just can’t always get there. One of the ways I encourage myself is by returning to these works to see if they teach me more on the next visit. Lately I’ve been returning regularly to Anselm Kiefer’s Die Orden der Nacht (translated as The Orders of the Night), which is hanging in a haunting installation called Material Difference, part of the larger Big Picture: Art after 1945 show at Seattle Art Museum.

First, it is huge, ambitious, and awe-inspiring. An oppressive energy emerges from the canvas. In the picture, a figure lies supine as giant sunflowers loom above, their seeds black and charred, their wilting stems and downcast petals seeming both sad and malicious. Wide-reaching symbolism informs the picture. When Kiefer says “These sunflowers are black like the firmament,” he assigns cosmic significance to them, to go along with their tremendous proportions.1 The man lying flat on the soil from which the sunflowers grow also links to a range of mythologies that tell of creation sprouting from suffering.

We can say, for sure, that it’s not an easy painting to digest. Kiefer believes firmly that art should be difficult—to make, and to understand—and that the challenge it offers can also bring growth.

He has caked paint all over the canvas in thick sloshings, building the picture outward as he has filled it horizontally and vertically. The surface shows cracks from the artist’s heavy application of paint, and this natural reaction of the medium also contributes to the mood of the painting. Like cracks in dried mud, they leave behind impressions of drying up and drought. Up close, one can see the paint applied aggressively, in big, slashing marks.

One of three really exemplary works by Anselm Kiefer in SAM’s collection, Die Orden der Nacht figured prominently in the two most important recent exhibitions of Kiefer’s work, the first displayed at London’s Royal Academy of Arts from September to December of 2014, and the second at Paris’s Centre Pompidou, from December of 2015 through April of this year. The celebrated Pompidou show was a globally important one, marking the first Kiefer retrospective in 30 years to be held in France, where the artist has made his home since 1992.

Also praised by art critics, the 2014 exhibition of Kiefer’s work at the Royal Academy in London united Die Orden der Nacht with another work of the same name by Kiefer. An earlier work, dating to 1988, this other Die Orden der Nacht is an illustrated book, comprising 40 pages, drawn in lead and bedazzled with diamonds. Though a large book, with dimensions of about three feet by two feet, it represents another face to Kiefer’s work that is different in many ways, including its size. With this and other illustrated books, the artist whose effectiveness seems, at first, so linked to the scale on which he is working—dwarfing viewers with the massive dimensions of his paintings, making grand gestures in lavish outlays of materials—moves into intimate territory, creating poetic images that approach the seemingly un-Kiefer idea of beauty. One artist has produced both bodies of work.