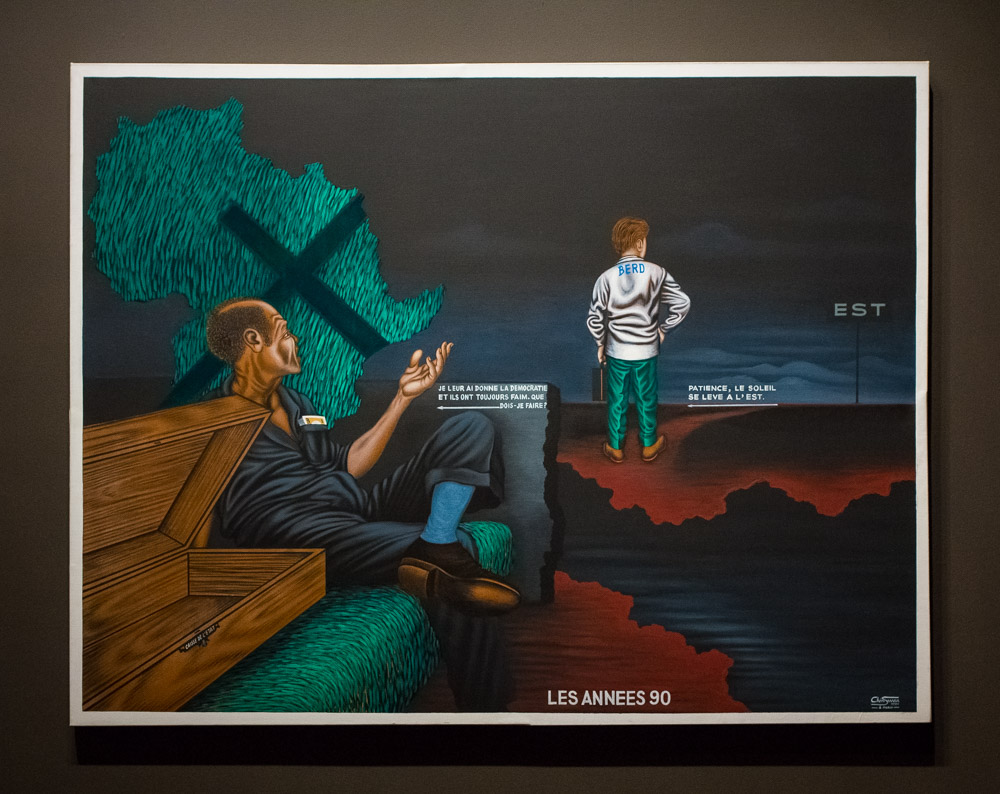 Congolese artist Chéri Samba has said that he likes to incorporate text into his narrative paintings because it keeps the viewer’s eye on the art longer. For visitors who find Samba’s acrylic painting of The Nineties in our Emblems of Encounter installation, it’s not just the French text that needs deciphering. Untangling what’s happening in the picture—as well as thinking about how the text informs the scene—all takes time and effort. Samba has created an image rich with symbolism and relationships for sorting out, and there’s plenty to delve into before even getting to the language.

Most clearly, the scene shows us two men. In the lower left, a figure in a blue suit, sleeves rolled up, lounges passively. His pocket is stuffed with cash, while the chest next to him is noticeably empty. His brown skin contrasts the fair skin of the second man. He looks and gestures toward this figure, who stands near the center of the composition, donning green pants and a white jacket, and gripping a briefcase in his left hand. He’s not looking back at the seated figure to receive the gesture. Instead, he gazes outward purposefully, toward the portion of the canvas where threatening clouds have lifted just a bit. There’s a ground in a burnt sienna color very nearly connecting them both, except for a path of moody blue water. The scale of the figures—the man in the blue suit fills about twice as much of the canvas as the other man—also communicates to us that there’s distance between them. Our view of the water ends as it comes to what looks like a grey stone wall, its edge jagged like the irregular coastlines of the two land masses on which the figures stand. With the rough wall, forming a barrier between the men, there’s further separation where connection seems more natural.

The man in the blue suit is seated on a grassy green surface. Above and behind him, we see the outline of the continent of Africa, filled in with the same fertile green, composed of many short marks, as blades of grass in a field. The artist has laid a symbol onto the map, and because of its shape and function we’d expect this to be an “x”–only one arm of this symbol is significantly longer than the others, so the shape more closely resembles a cross.

Samba’s painting offers a biting satire of hypocrisy and greed, in a scene reflecting on corrupt leadership and rapacious opportunism. Judging by the work’s title, The Nineties, we imagine the artist is reflecting on a specific time period and likely responding to certain wrongs. That he painted this only in 1991 adds even more weightiness to the picture; it seems to be a dark vision of what he foresaw unfolding as much as a rebuke of events he had already witnessed. In Emblems of Encounter, Samba’s thoughtful critique joins a group of objects that chart 500 years of the complex and difficult history of European-African interaction. Considering The Nineties, even without the specific narrative laid out, I’m reminded that our understanding of nuanced histories depends, to a large extent, on what side of the shore we stand as we perceive them.