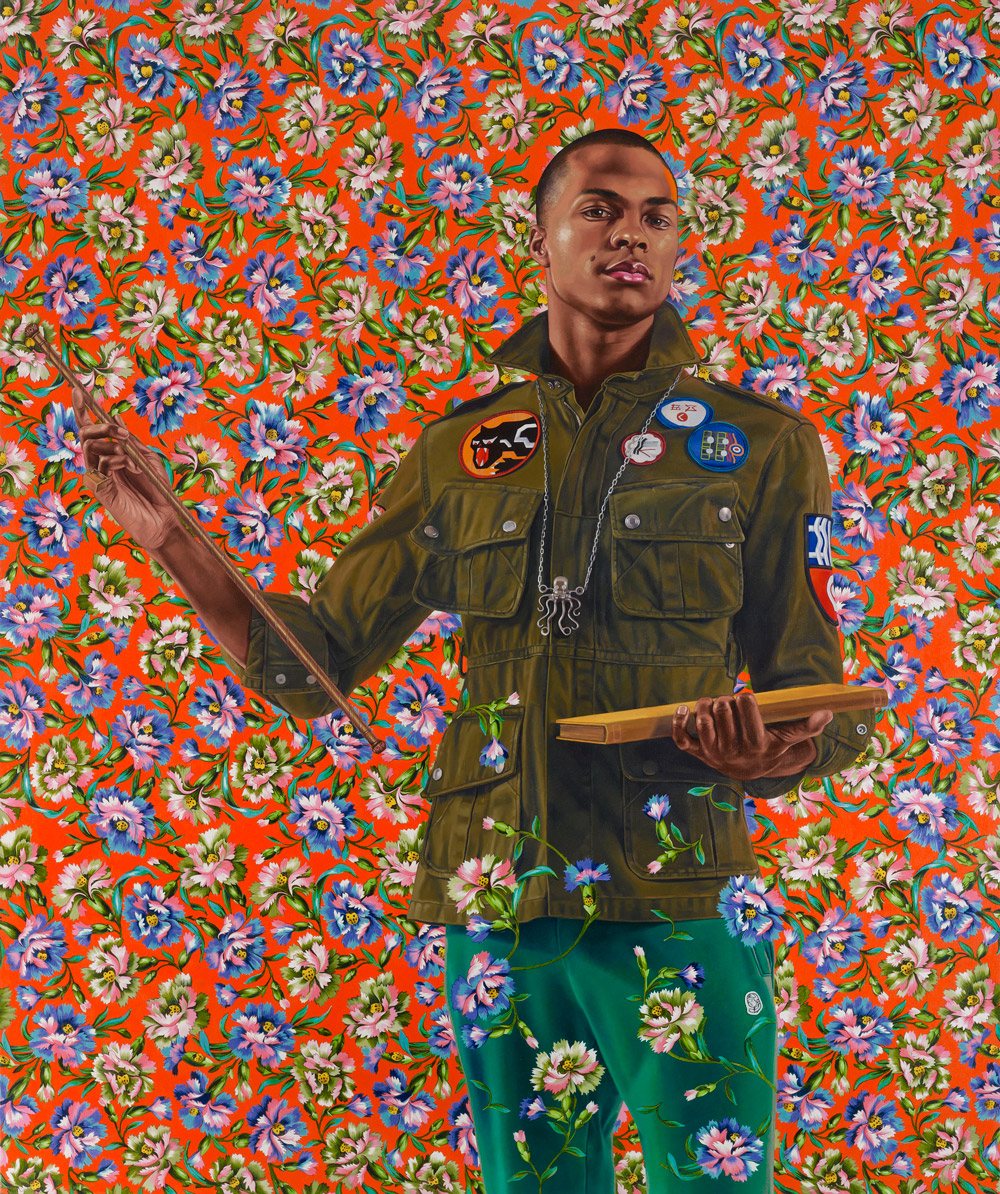 You simply can’t miss the eye-catching posters and banners all over Seattle advertising our next special exhibition, Kehinde Wiley: A New Republic. When you come for the free opening celebration this week—and do come!—you’ll see huge paintings from private and public collections across the world, including a gem from SAM’s own collection.

Anthony of Padua, a painting in the very traditional method of oil on canvas, measures six feet tall by five feet wide. The figure is imposing, the decoration bright and busy. His is an empowering posture borrowed from the aristocratic patrons of art history and conferred to a young person of color. The rococo frills that surround him speak of the joy of excess.

He brings together, as Kehinde Wiley’s work often does, two worlds of swagger. The original swagger portrait (a real term in art history used even by stuffy academics) developed in Europe in the 17th and 18th centuries. At the time, those who had the funds to do so might pay an artist to paint them in a very flattering pose, wearing elegant and expensive dress, accompanied by symbols of their knowledge or power. The idea was to show off your status, wealth, and noble character. You wanted to impress those around you and those who would see your painting long after you were gone.

More recently, swagger has been mostly informed by looks, attitudes, and language developed in street culture. Kehinde Wiley’s work picks up on both points of reference, which, when we think about it, are not so different. Urban Dictionary’s top definition describes swagger as “How one presents him- or herself to the world. Swagger is shown from how the person handles a situation. It can also be shown in the person’s walk.” The way to attain it has changed across cultures and across time, but swagger has always been about getting respect by portraying self-confidence. It’s always played out through language, body language, and dress.

To build his new swagger portraits, Wiley has developed a practice of “street-casting” to choose the models for his portraits. Wherever he might find himself looking—and Wiley has taken subjects from places as diverse as Brooklyn and Brazil, India and Israel—he strolls the streets, more or less living his life, but also waiting for a moment of connection with another individual. He’s allowing chance to play a role in selecting who makes it into these paintings, and then onto the walls of a gallery or museum. The models come to the artist’s studio with the instruction to wear everyday clothing and express their personal style. That’s just how the model for Anthony of Padua posed and is portrayed here: with his own coat and patches, teal pants, and octopus necklace. Anthony of Padua arrived at SAM in 2013, shortly after he was painted. Here, he was not destined for the Modern and Contemporary galleries, but found his home right away in the European Baroque galleries, surrounded by the likes of Veronese and Anthony van Dyck—one of the most successful to ever do a flattering portrait.

The historical figure who informs the title of SAM’s Kehinde Wiley painting is Anthony of Padua, who lived 1195-1231, and who was canonized in 1232. I like to think that SAM’s painting, if only because it shares his name and a resemblance to another artist’s depiction of him, carries some of the presence and virtues of the saint. In life, Anthony of Padua became known as a devoted student, one with a remarkable memory, and as a convincing, charismatic orator. In the Catholic tradition, he cares for, and hears prayers from, the poor, the elderly, expectant mothers, travelers, and seekers of lost things. Fittingly for us here in Seattle, he is also the patron of fishermen, domestic animals, and mariners.