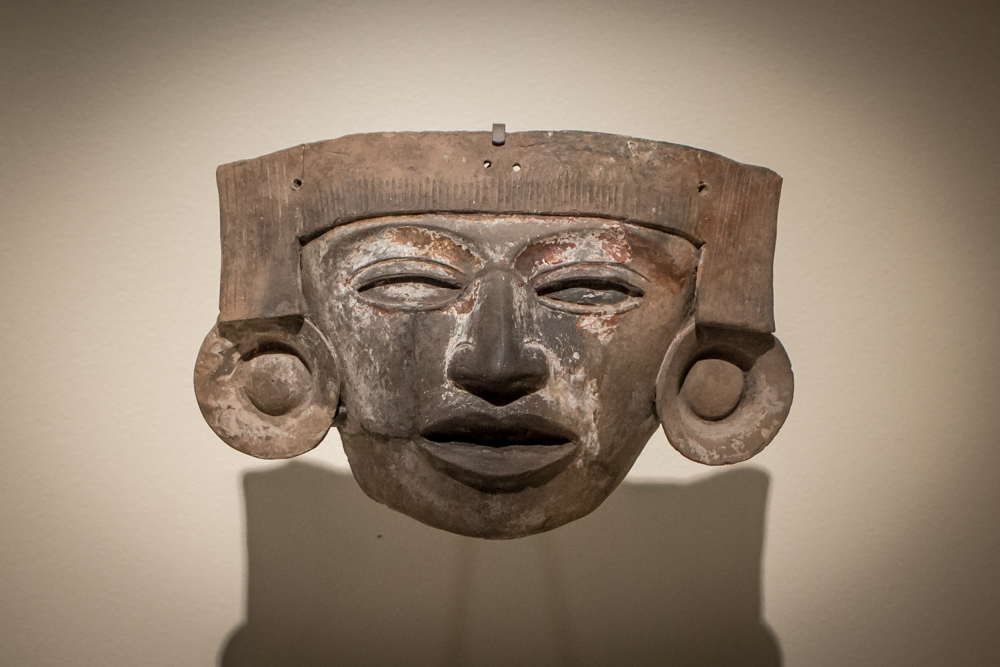 Some 1500 years ago in the holy city of Teotihuacan in Mexico —“the place where the gods were created”—this small mask was formed from a mold, enlivened with a strong and spiritual presence that remains in it today. One has to see the piece in person to feel and experience the weight of history that it carries. The natural patina that has changed the color of the ceramic material to a range of earth tones gives the mask an aura of importance. It presented a very different face in its days of use in the Teotihuacan culture.

Picture this same intense figure in bright red and white paint, now part of a larger sculpture group decorated with hatching patterns, discs, mystical eyes, and spirals, with plumes of fragrant smoke rising above him and moving toward you. Masks from Teotihuacan were often decorated with pigments, and small traces of red remain on the hair of SAM’s Mask with ear spools. Experts think it was probably part of a large incensario, or incense-burner. From those early days of the mask’s history, it has entered a new chapter, where it engages visitors to our small but awesome Meso-American gallery, joined by Peruvian ceramics, Aztec stone figures, gold, and jade.

The mask was found near Azcapotzalco, an area in the northwest part of Mexico City. It was purchased in 1949 from Earl Stendahl of Stendahl Art Galleries, an important dealer in Los Angeles first known for bringing Modern art to the West Coast and for representing the California Impressionists. Later, Stendahl turned to Pre-Columbian art, and it was this area that became the gallery’s specialty. The mask entered SAM’s collection in early 1950.

The face in Mask with ear spools is staring us down. He occupies a space between art that creates the illusion of life and art that symbolizes life, using a form of representation based on line and shape. The large ear spools are symmetrical discs with perfectly rounded orbs at their centers. The band of hair has precise, vertical lines all the way across it, like a flexible ruler taped to this man’s forehead. The eyes are rendered as thin almond slivers, whose shape is echoed in the arching lines of the eyelids and brow. A prominent nose, again perfectly symmetrical, with curvy, thickset lips below it, and a strong, angular jaw complete his look.

From the 2nd century B.C.–7th c. A.D. Teotihuacan, his place of origin, was an important Mexican city—at its height, the sixth-largest city in the world, and a political, cultural, and religious center. The drama of the city’s story relates not only to its riches but also its fast decline and almost total disappearance. We’re grateful to have a piece of that fascinating story here at SAM!