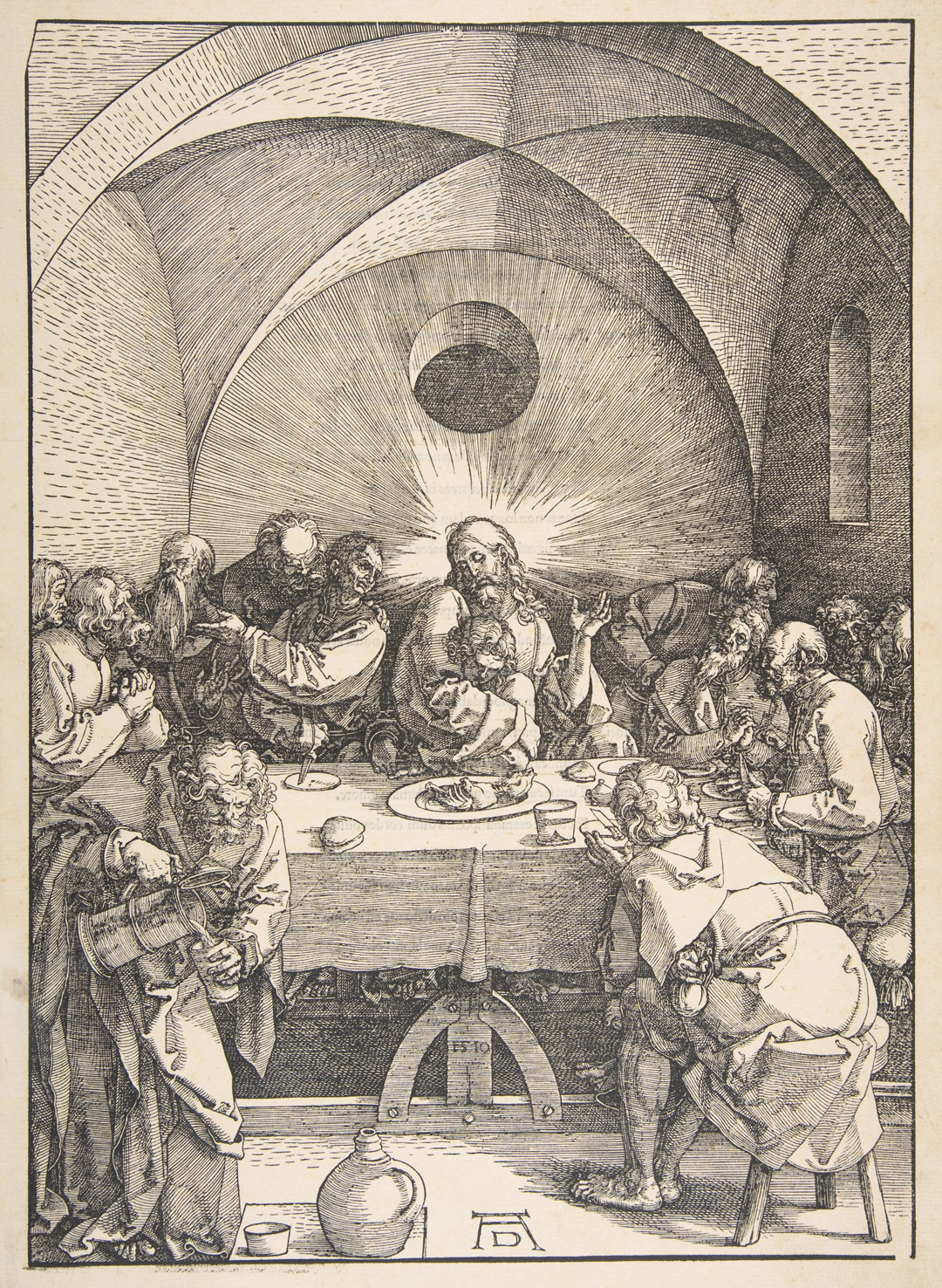 This is it, people. Less than a week left to get your fill of Graphic Masters: Dürer, Rembrandt, Hogarth, Goya, Picasso, R. Crumb before it closes August 28. In this, the last week of our groundbreaking summer exhibition, we deliver our final crash course in printmaking with a quick introduction to woodcut.

Get up close and personal with the rich history of woodcut prints by viewing Albrecht Dürer through the magnifying glasses provided in the Graphic Masters galleries. With more than 400 artworks by six artists, you’ll want to give yourself plenty of time to soak up the details during your visit to SAM. Dating back to the 14th century, woodcut was the first process developed in Europe for printing on paper. Woodcuts are a relief process —the artist makes a drawing on the block and chisels everything else away, leaving the raised lines on the surface intact. Before printing, a uniform layer of ink is rolled onto the wood block surface using a brayer.

Woodcuts are characterized by crisp outlines and a sharp contrast between the black ink and white paper. Dürer used hatching, a series of parallel lines that vary in thickness and frequency, to create a mid-toned background for Christ’s divine halo. 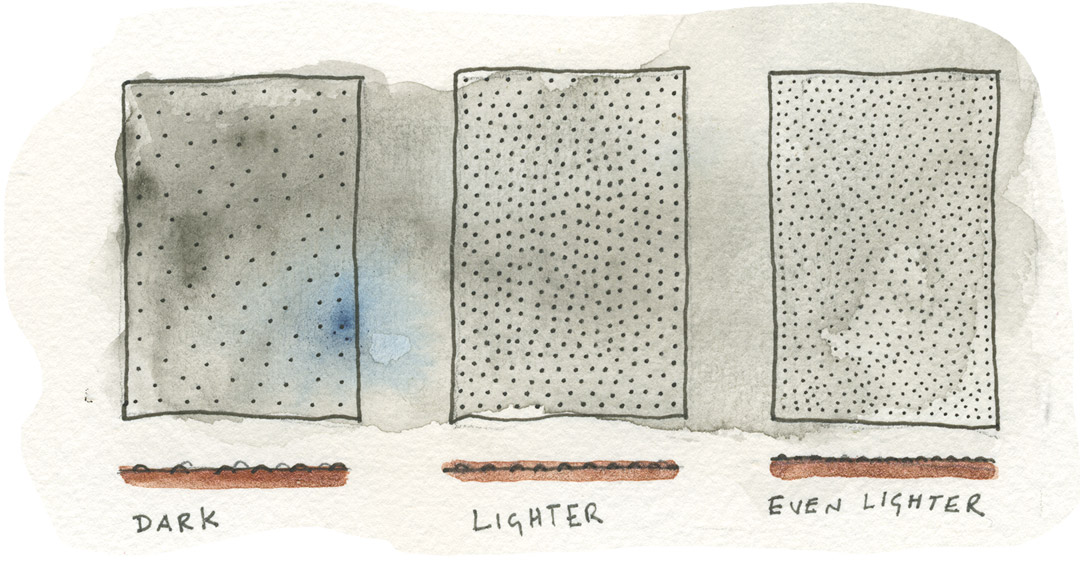 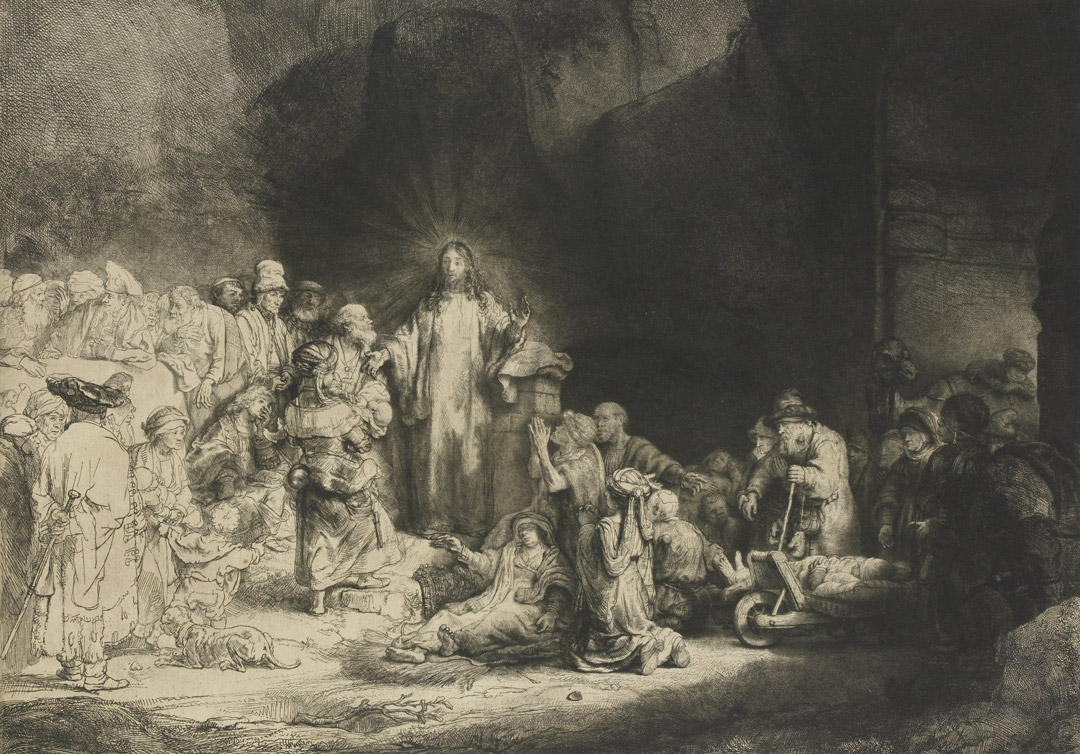 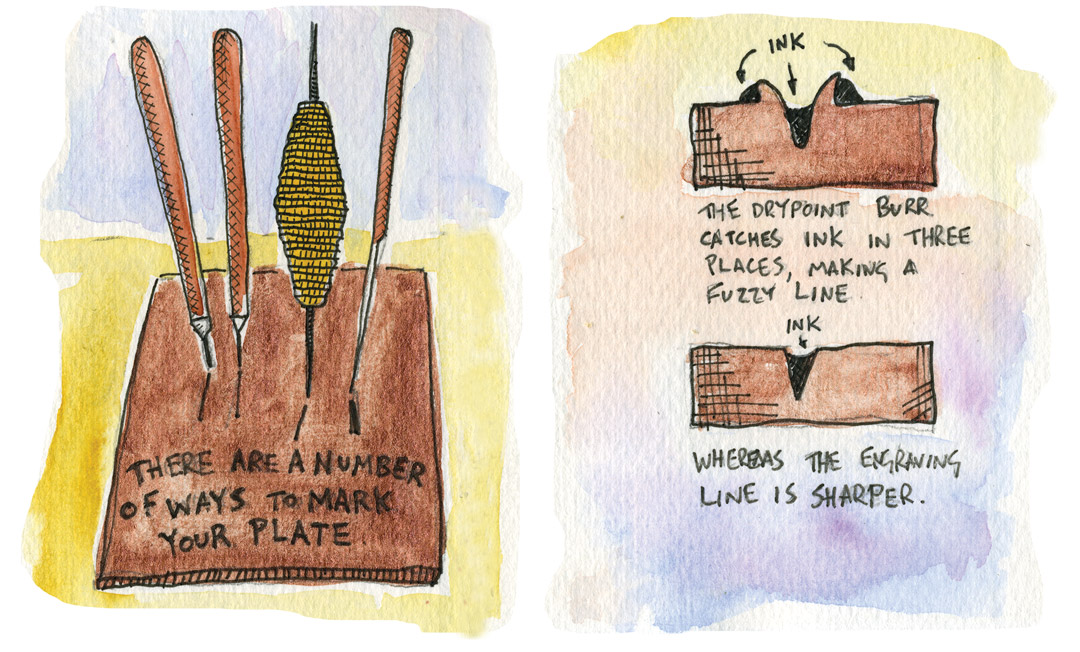 We continue to dig in to the printmaking on view in Graphic Masters: Dürer, Rembrandt, Hogarth, Goya, Picasso, R. Crumb with another technique requiring carving—drypoint, a type of intaglio printing. Last week we discussed engraving, a method that produces clean, smooth lines. Drypoint, on the other hand, produces a more textured and ephemeral effect offering delicate and subtle touches. Looking for a more hands-on learning experience? Check out our Press & Print: Drop-in Studio events taking place Sundays, 11 am–1 pm through August!

Similar to engraving, drypoint requires the artist to carve directly into the plate surface. What distinguishes this technique is the way the drypoint needle displaces the copper to form burr—jagged furrows and curls of rough metal on the surface. The burr grabs and holds the ink, resulting in rich, fuzzy lines. Because repeated pressure from the printing process quickly wears down the burr, the effect is fleeting and early impressions are considered the finest and most sought after. Ink captured by the burr spreads out on the paper, resulting in caterpillar-like lines. In this etching, Rembrandt added touches of drypoint to accentuate the texture of the foliage. 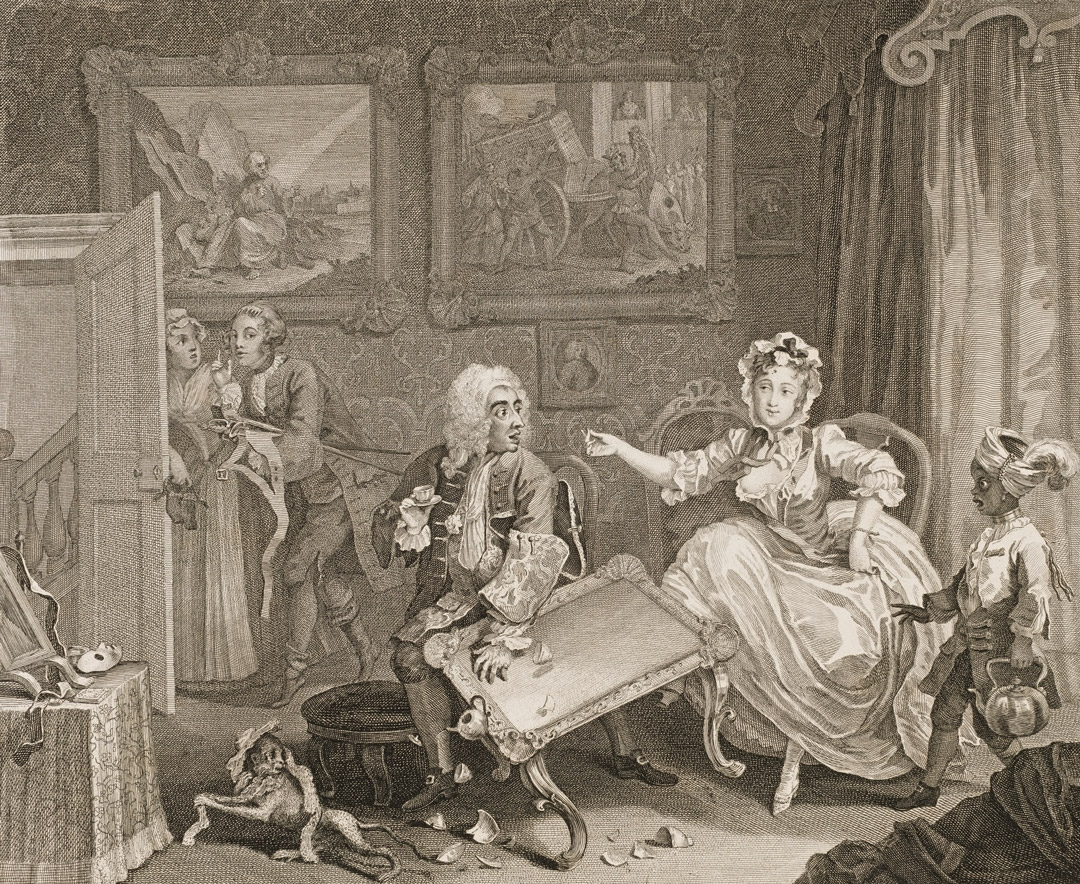 Last week on Graphic Content, we introduced printmaking and the intaglio method. This week we discuss engraving, a type of intaglio, used by William Hogarth for his print series in Graphic Masters: Dürer, Rembrandt, Hogarth, Goya, Picasso, R. Crumb. Want to learn more? Study the effects of this method with a visit to SAM and get more tips on printmaking by working with local artists during Press & Print: Drop-In Studio.

Check back weekly through the run of Graphic Masters for more information on different types of printmaking and get creative in and out of the museum. To make an engraving, the artist incises a design into the plate using a burin, a tool with a sharp diamond-shaped tip that creates smooth lines with crisp edges. Significant pressure and a steady hand are needed to force the burin into the plate and cleanly remove the excess copper from the surface. Because of the immense skill involved, some artists employed professional engravers to execute their designs. Whether calligraphic curves or stippled dots, engraved lines are clean and precise. Hogarth employed cross-hatching, the angled intersection of hatched lines, to achieve a great range of textures and tones. 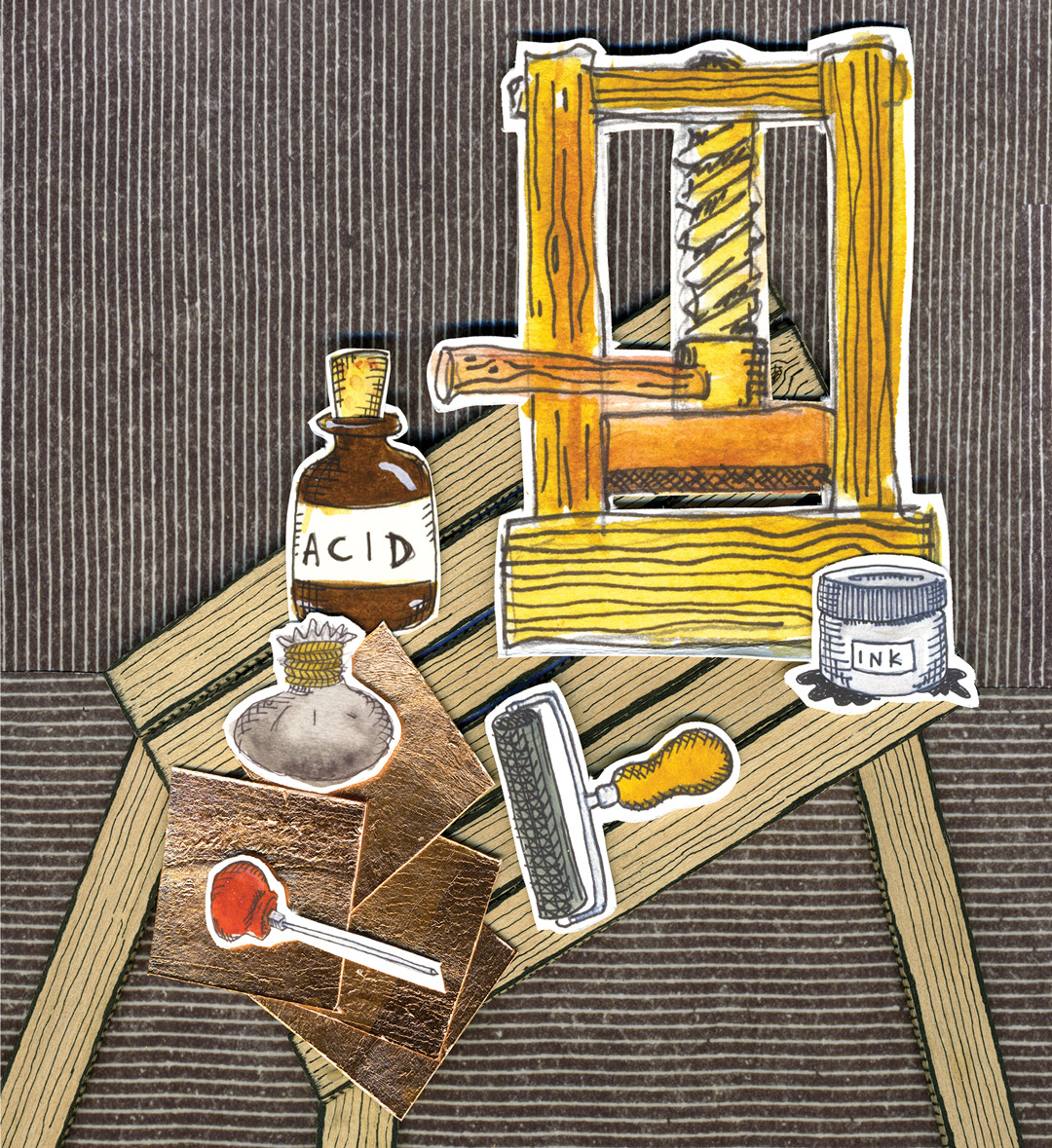