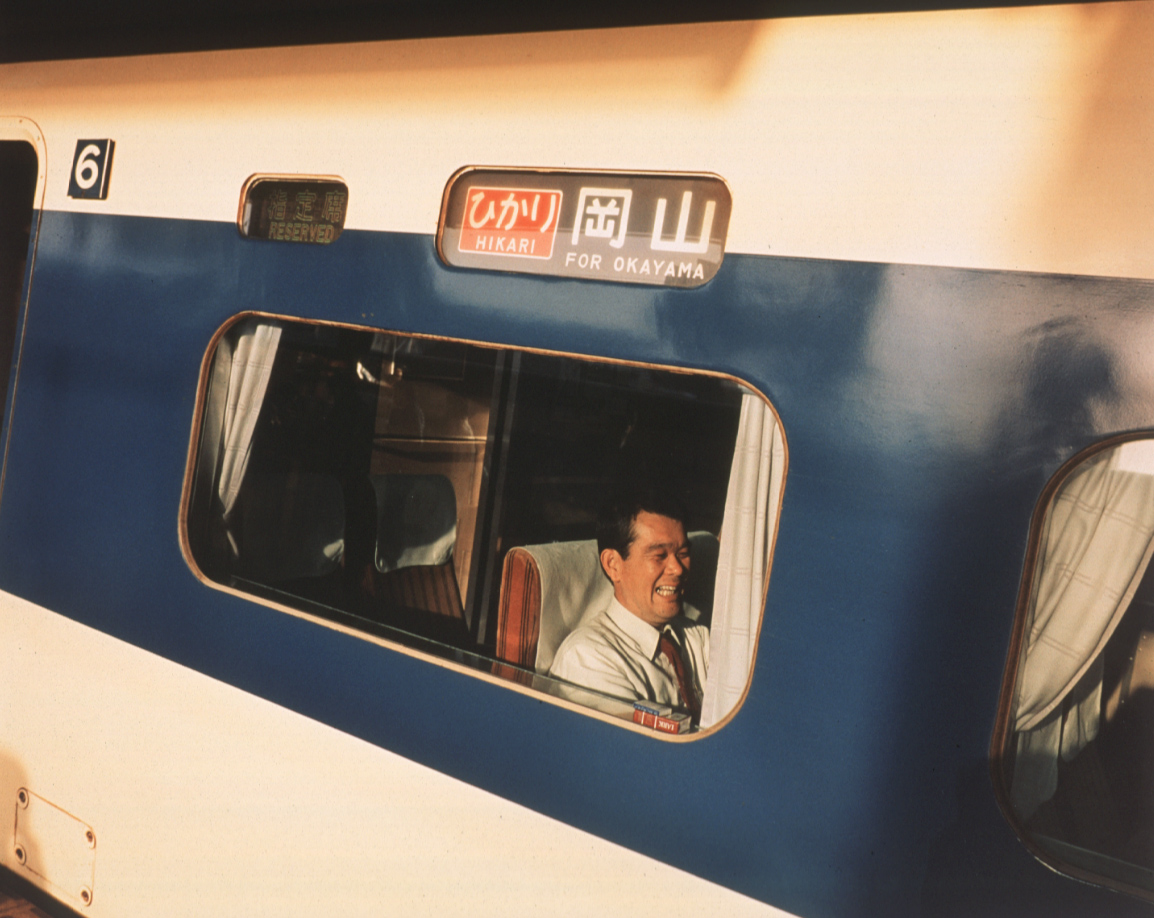 Just as the shinkansen, Japan’s bullet train, began to pull out of Atami station, photographer Leo Rubinfien captured the joy of high-speed rail transit in a fleeting moment. A businessman bursts out with laughter, his face framed by the black window frame and white curtains of his train carriage as he embarks on the four hour journey to Okayama along Japan’s southeastern coast. The blue horizontal paint that runs along the exterior of the train carriage draws the viewer’s eye horizontally, as if our eyes are tracing the movement of a train in-motion through a static image.

This 1984 photograph, In the Superexpress Station, Atami, is part of a series taken over an eight-year period in East and Southeast Asia in Rubinfien’s attempt to subjectively present and characterize his surroundings. Having spent his early life in Tokyo, Rubinfien moved through over seven countries between 1979 and 1987. His images tell a compelling and truthful, yet un-romanticized story of the people and culture he encounters on this trip. The subjects of his images—including both tourists and locals—are said to successfully depict “how the East views itself,” while simultaneously illustrating “how the West constantly assaults but never quite conquers it.”

Rubinfien’s photographs were last on view in SAM’s galleries over 27 years ago in Leo Rubinfien: A Map of the East. However, today, they are just as relevant as ever. As contemporary documentary photographers still grapple with questions of “othering” and face the challenges of conveying lived experiences without appropriation through a single snapshot, Rubinfien’s photographs act as a blueprint. Similarly, as local transport systems across the globe continue to expand, and we become more cognizant of the impending doom that is the planet-wide climate crisis, rail transportation is more important than ever. Rubinfien, through both In the Superexpress Station, Atami and other images in his series, relays questions surrounding pollution, transportation, and globalization over the last 30+ years to viewers. Rubinfien captures people and moments, despite decades aged, that remain topical and vibrant to contemporary discussions.