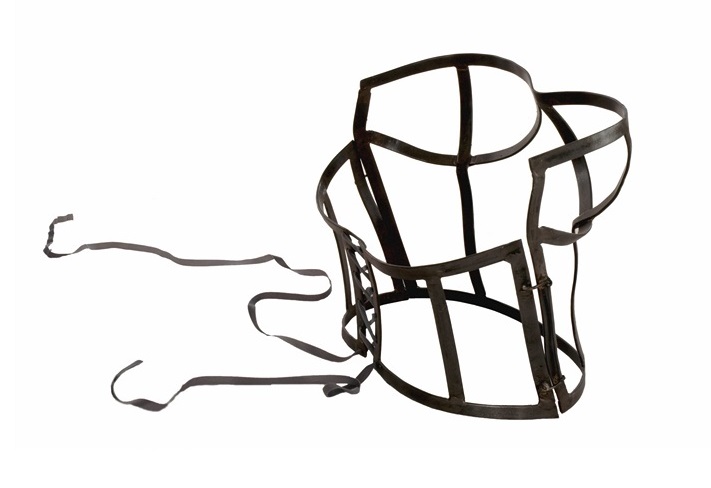 No matter where I encounter them, Naiza Khan’s artworks always transport me back to a classroom on the campus of SOAS, University of London. It was in one such space where I had the privilege of hearing the artist speak about her series Henna Hands and The Skin She Wears—both deeply connected to Cage-Corset (2007) and New Clothes for the Emperor (2009), currently on view at the Seattle Asian Art Museum as part of the exhibition Embodied Change: South Asian Art Across Time.

These works and series illustrate Khan’s preoccupations with the female body. In thinking through the function of attire as a construct, Cage-Corset and New Clothes for the Emperor present clothing as a strategy to discuss gender. This is all the more relevant placed within the context of the back-and-forth between feminist activism and Islamicization in Pakistan that began in the 1960s and 70s, and gained much greater traction in the 1980s. As scholar Iftikhar Dadi has noted, in Khan’s works “the female body finally becomes visible in modern South Asian “Islamic” art as a subject itself, rather than simply remaining a decorative motif.”[1]

Part of her Heavenly Ornaments series, in which Khan turned to metal to fabricate armor, corsets, chastity belts and lingerie, Cage-Corset and New Clothes for the Emperor highlight the artist’s engagement with the Bihishti Zewar, an Urdu text written by the Islamic scholar and Sufi Ashraf Ali Thanawi. Written in the beginning of the twentieth century, the text prescribes morals and behaviors pertinent to young Muslim women and girls. Noteworthy, the Bihishti Zewar was written with state and social reform in mind. It posited that Muslim women were capable of becoming educated and moral actors just as equally as men. Thus, the Bihishti Zewar paradoxically asked, why should women conform to the authority of men or the state?

Through her artworks, Khan also references the presence/absence of women within the public sphere, particularly in the context of the roll-back of numerous rights for Pakistani women under the Zia regime of the late 1970s and 80s. Despite these retrogressions, huge numbers of women entered both the formal and informal labor sectors, and the applications of female students to higher educational institutes significantly increased. While the Zia regime attempted to control the presence of women in the public sphere, it inadvertently brought attention to the emergence of the publicly visible female body as an issue that could not simply be “rolled back.” In other works, Khan, unlike women artists before her, made use of the calligraphic form that was purported by the state as within the line of its official policy. Thus, Khan’s artworks demonstrate that simply opposing any state sanctioned idioms and logics are not enough to ensure the freedom of women.

Khan’s Cage-Corset and New Clothes for the Emperor demonstrate the entanglement of social, political, religious, and spatial relations that inform questions of subjectivity, freedom, and control imposed upon females. Then, as a starry-eyed master’s student, as now, the quiet subtlety of Khan’s artworks ring true. The artist does not simply claim her works as agents of freedom for those living under repressive regimes, but rather, brings attention to the ways in which such systems and its mechanisms, just like her corsets, are constructed, negotiated and navigated.