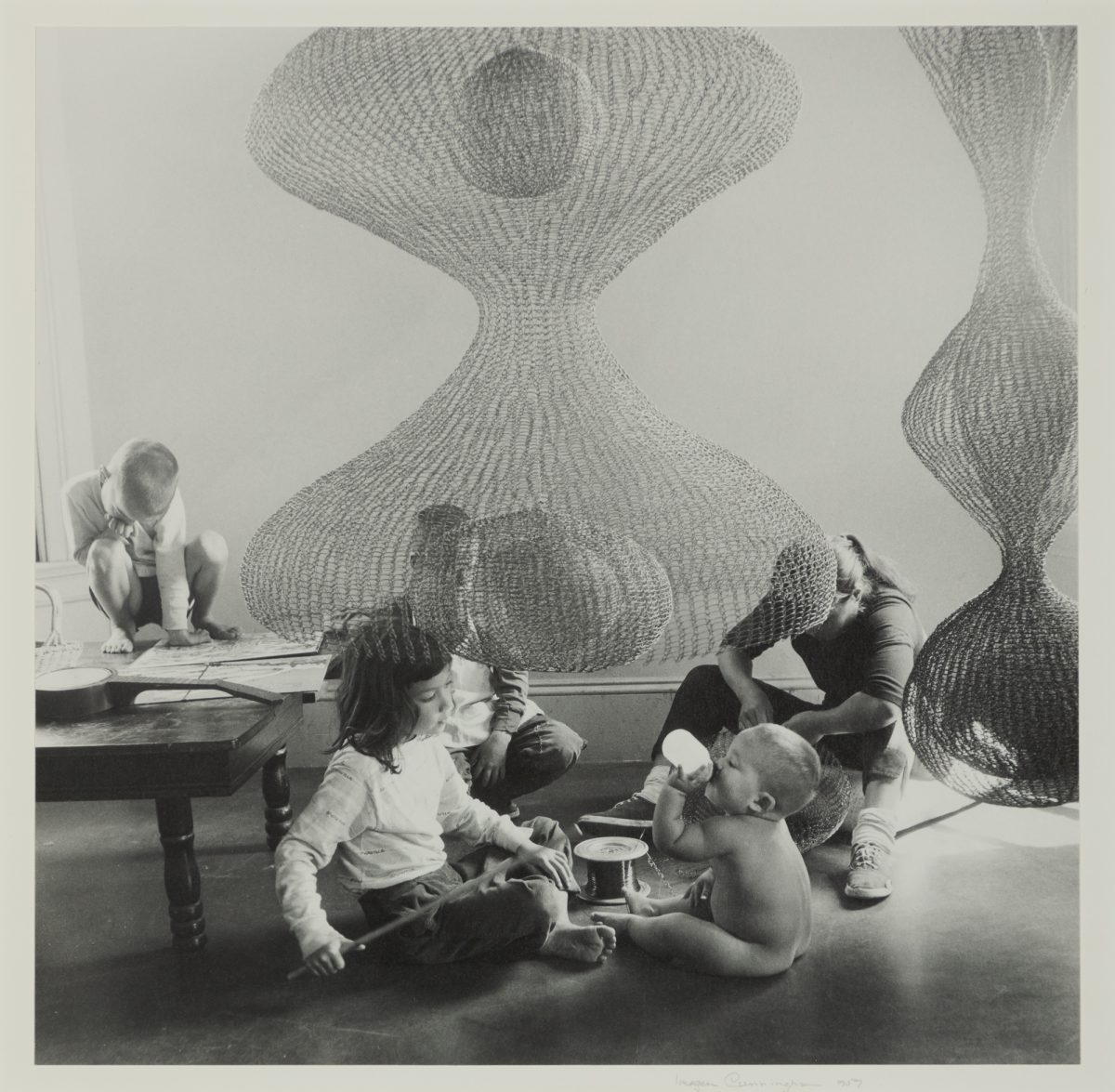 In 1950, Imogen Cunningham’s son Randal introduced her to Japanese-American artist Ruth Asawa. Despite their 43-year age difference—Asawa was 24 and Cunningham was 67 at the time—the two artists quickly developed an unbreakable bond.

“Asawa and Cunningham placed a priority on relationships and refused to choose between the life of family and their art,” explained art historian and curator Daniel Cornell of their friendship. “They shared a similar fate as the critics who labeled their work feminine as a way to suggest its inherent inferiority to the work of male artists.”1

In a drafted letter recommending Asawa for a Guggenheim Foundation grant, Cunningham wrote of her friend: “However remote and obscure Ruth Asawa’s project may seem to most of us, I have very strong reasons to believe that she can achieve a real improvement in building ornament by carrying it out… To me, she is what I call an unfailingly creative person and there are very few of them.”2

Listen to this audio recording to discover the backstory of one particular photograph Cunningham took of Asawa and her family in 1957. Produced by the Seattle Art Museum, this recording includes a discussion by Japanese and Chinese Canadian photographer Kayla Isomura on the significance of Ruth Asawa Family and Sculpture and its influence in her own work. Learn more about this image from SAM’s personal collection and Ruth Asawa’s legacy here, then see it on view alongside Ruth Asawa’s sculptures now in Imogen Cunningham: A Retrospective at SAM through February 6.

Kayla Isomura: I really enjoyed this image actually because of how candid and sort of natural it is, and it’s so every day in a way, but there’s also this interesting juxtaposition of just the art that takes up so much of the space. I’m not even sure if I should be looking at the sculpture or the kids, but I think just all of that put together, for me it just seems very intriguing as an image.

Narrator: Cunningham often photographed Asawa’s sculptures, but this image incorporates the domestic studio. Beneath the central sculpture sits a baby drinking from a bottle and a girl with a stick. Partially hidden by the suspended work, a third child watches as his mother pulls wire from a spool to begin another looped sculpture. A fourth child crouches on top of a low table.

Kayla Isomura: It doesn’t feel like the family or the kids are necessarily aware that the camera is there. They’re just kind of doing their own thing.

Narrator: Like her sculptures, in which open weaving reveals forms inside the forms, multiple facets of Asawa’s life are on view. You can see several of Asawa’s sculptures in this gallery. Asawa, her parents, and five siblings were among approximately 120,000 Americans of Japanese descent incarcerated during World War II. In her work, The Suitcase Project, Kayla, a fourth-generation Japanese and Chinese Canadian, asked Japanese Americans and Canadians what they would pack if they were forced into an internment camp. The process raised questions about the complex relationships among artist, subject, and identity.

Kayla Isomura: Something that in recent years that I’ve really come to consider is this sort of question of who is allowed to do this work. Do you have that connection, or do you feel this as part of your identity if this is what you want to do? Or can you work with somebody who has a closer connection if you do not? So is it enough that the subjects in their work, are maybe being represented? Or, does it matter equally as much that the person behind the work, you know, has that direct connection, to whatever it is that they’re documenting? And I think those are the questions that I have.