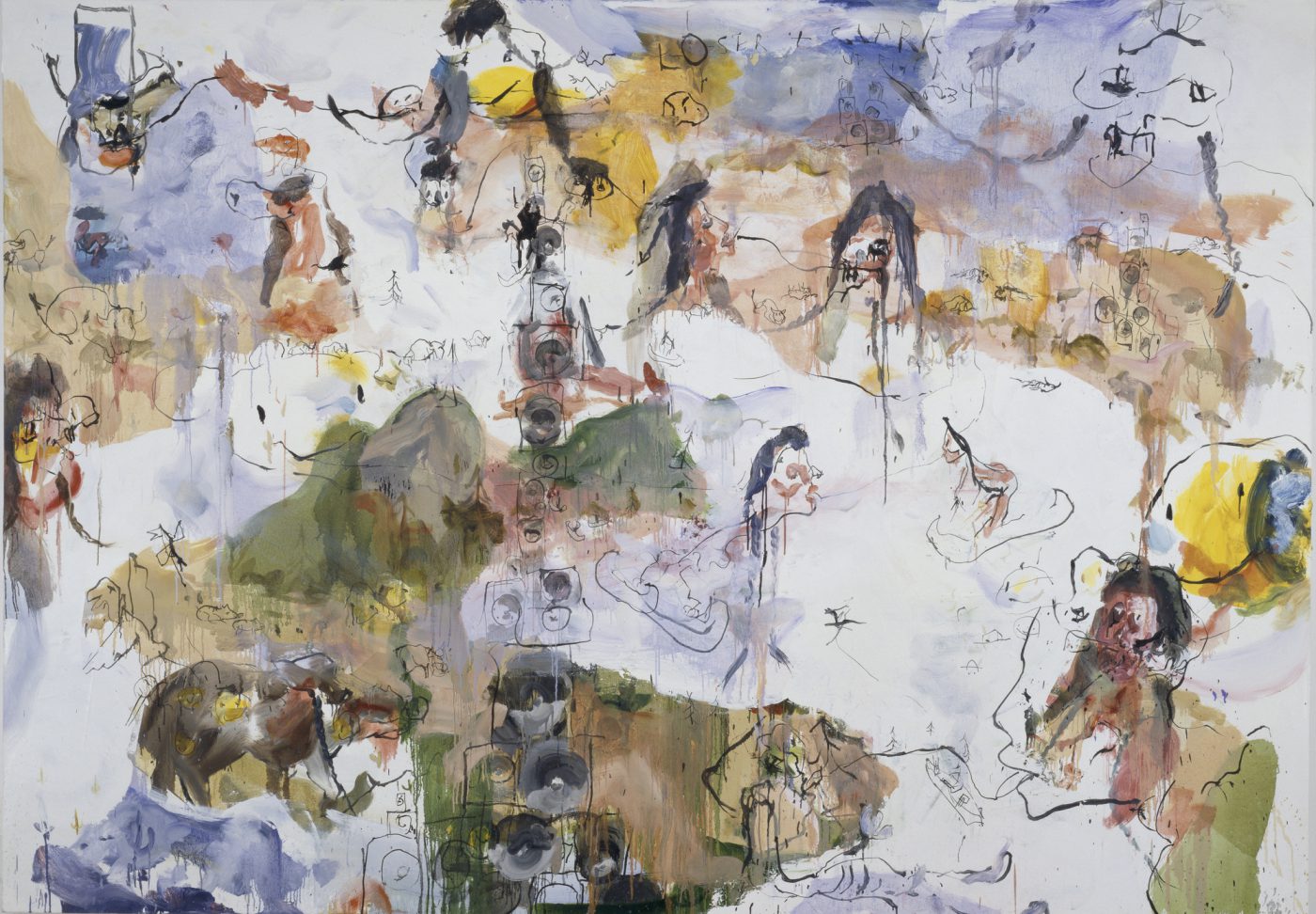 “I’m making landscapes that I can live in through an ongoing definition of contemporary life and art. Not about America, but from America.”

It is a painting that, for many SAM staff, is one of the first and last artworks seen during a given workday—a painting embedded in the daily commute from the staff entrance to various offices. And, having worked from home for a majority of the past year, it is both a ritual and an artwork deeply missed.

The painting, titled Loser + Clark, is by artist Brad Kahlhamer. Completed in 1999, the work was featured in a solo exhibition at Deitch Projects, New York, that same year. Its size—84 x 120 inches—is large. The paint, applied in “brushy, sinewy networks,” is set against a white ground.[1] The artist’s light washes of color form an abstracted landscape, upon which shapes and forms are scattered, almost floating: “animals, figures in canoes, wobbly Happy Faces, skyscraper-like stacks of music amplifiers, scrawled phrases, portraits and self-portraits.”[2] Loser + Clark,[3] like other works included in the 1999 exhibition, ironically titled Friendly Frontier, came out of a then-recent trip Kahlhamer had made to Montana and the Dakotas—a trip taken to deeper explore and experience the history and mythology of the American landscape.[4]

Kahlhamer was born in Tucson in 1956 to Native parents, and adopted by German-American parents as an infant. Raised between Arizona and Wisconsin, and later living in New York City as an adult, the artist considers his upbringing a nomadic one.[5] Relatedly, his paintings function as what he calls a “third place”: “distinct from the ‘first place’ of his Native American heritage, and the ‘second place’ of his . . . upbringing with his adoptive parents”—a way to express and understand two different realities.[6] Viewing both himself and his artwork as “tribally ambiguous,” Kahlhamer embraces notions of cultural hybridity to produce a vision of America that is uniquely his own.[7]

The artist’s biography informs the mythology of his work, which is infused with rich symbolism. Red, white, and blue, for example, represent Kahlhamer’s version of the American flag, “constructed out of sky, water, and the American earth.” Color, too, holds meaning: the color black is the East, and his towers of black amplifiers signify skyscrapers and urban development; “blue [is] for the sky, the wind, and velocity. Browns and reds [are] for the earth and for flesh. Yellow [is] for understanding. Transparency and openness [are] about possibility.[8]

For the artist’s 2019 exhibition at the Minnesota Museum of American Art, A Nation of One, Kahlhamer’s notion of the “third place” was presented as a space that is at once a site of singularity and isolation, as well as unification. And while the term means something very specific within the context of Kahlhamer’s life and work, isolation and unity have certainly been ever-present themes this past year. But even more than that, the painting offers space to reflect on what America is—real and imagined—and what it might mean to be American. It is also a vital reminder, every day, that we are on Indigenous land.