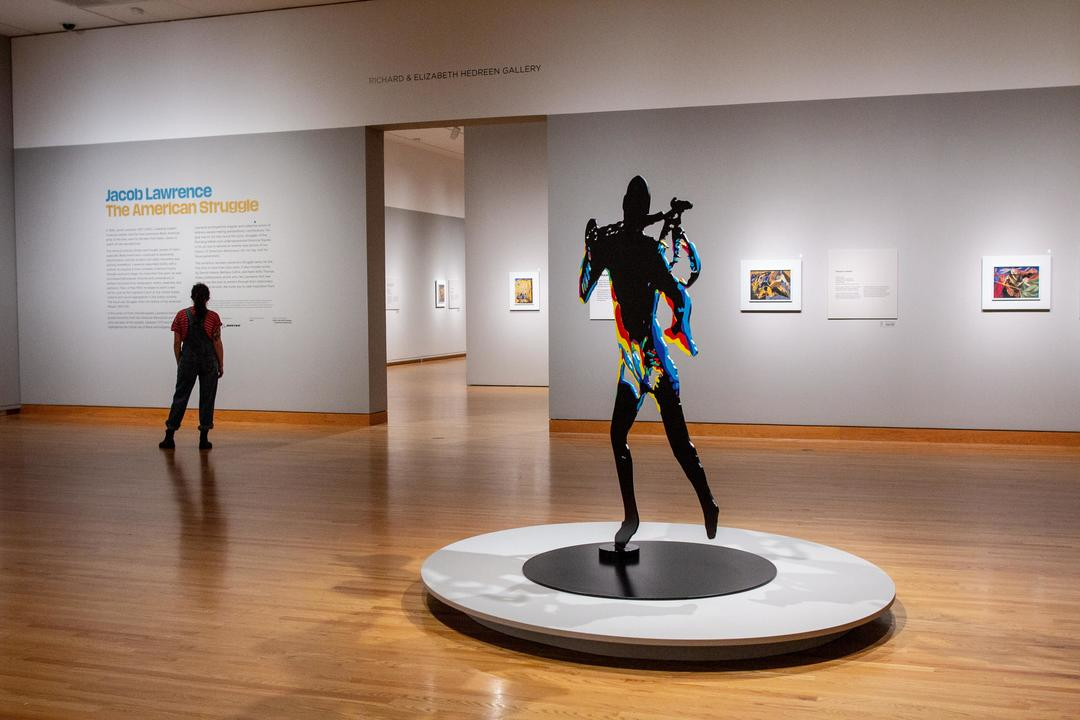 The Seattle Art Museum is back! We’ve reopened our doors just in time for the opening of  Jacob Lawrence: The American Struggle and Barbara Earl Thomas: The Geography of Innocence.

The Seattle Times featured the Struggle series in their Friday edition, with a preview by Megan Burbank and a look at youth art featured in the exhibition by Gemma Alexander. The front page of their Saturday edition featured a photo from the opening by Alan Berner.

“Rather than choose between abstraction or realism, Lawrence deftly navigated between the two. ‘He found narrative to be very important. That act of storytelling and reviving history and really thinking about events of the past and how you communicate those in a very modern way—it was really central to his practice and his process as an artist,’ [curator Theresa Papanikolas] said.”

Crosscut’s Brangien Davis talked up the reopening in her ArtSEA letter; she also celebrated SAM’s recent gift of art from the Lang Collection. The Seattle Times’ editorial board lauded the generous gift, as did Jasmyne Keimig of the Stranger; the whole community will be able to see the artworks later this fall.

“The Langs were intentional in collecting art, he said, listening to friends and dealers but ultimately making independent decisions about what they liked. They lived with these paintings and sculptures; everything they owned was up on the wall or on display. And in a similar spirit, this donation is intended for the public good—these babies need to be seen.”

The Stranger’s Jasmyne Keimig also has an update on the public art blooming along the AIDS Memorial Pathway.

Seattle Met has some great recommendations for what to do in Seattle over the coming week.

Lisa Edge speaks with Marcellus Turner, the outgoing chief librarian of the Seattle Public Library, about the legacy he’ll leave behind.

“‘It was amazing how many people recognized me the first couple of years I was here,” said Turner. “While walking down the street, I would often get asked the question was I the chief librarian.’ That appreciation was a pleasant and welcome surprise, but it didn’t put more pressure on Turner. Rather, it increased his awareness that it was more than just library staff and the board of directors keeping tabs on his performance. The Seattle community would also be a vocal stakeholder.”

For International Women’s Day, Artnet asks art-world women to share about the women who have inspired them.

ARTnews reports that Amy Sherald’s portrait of Breonna Taylor, which originally graced the cover of Vanity Fair, has been jointly acquired by two museums.

Hilarie Sheets of the New York Times announced the discovery of yet another missing panel from Lawrence’s series. There are still three panels out there!

“[Curator Lydia] Gordon is pinning her hopes on the huge community of Lawrence’s former students and supportive gallerists and curators in Seattle, where the painter lived for the last three decades of his life after leaving New York. ‘Oh, we’re totally going to find them!’ she said firmly.”

Curating is “an act of generosity.”