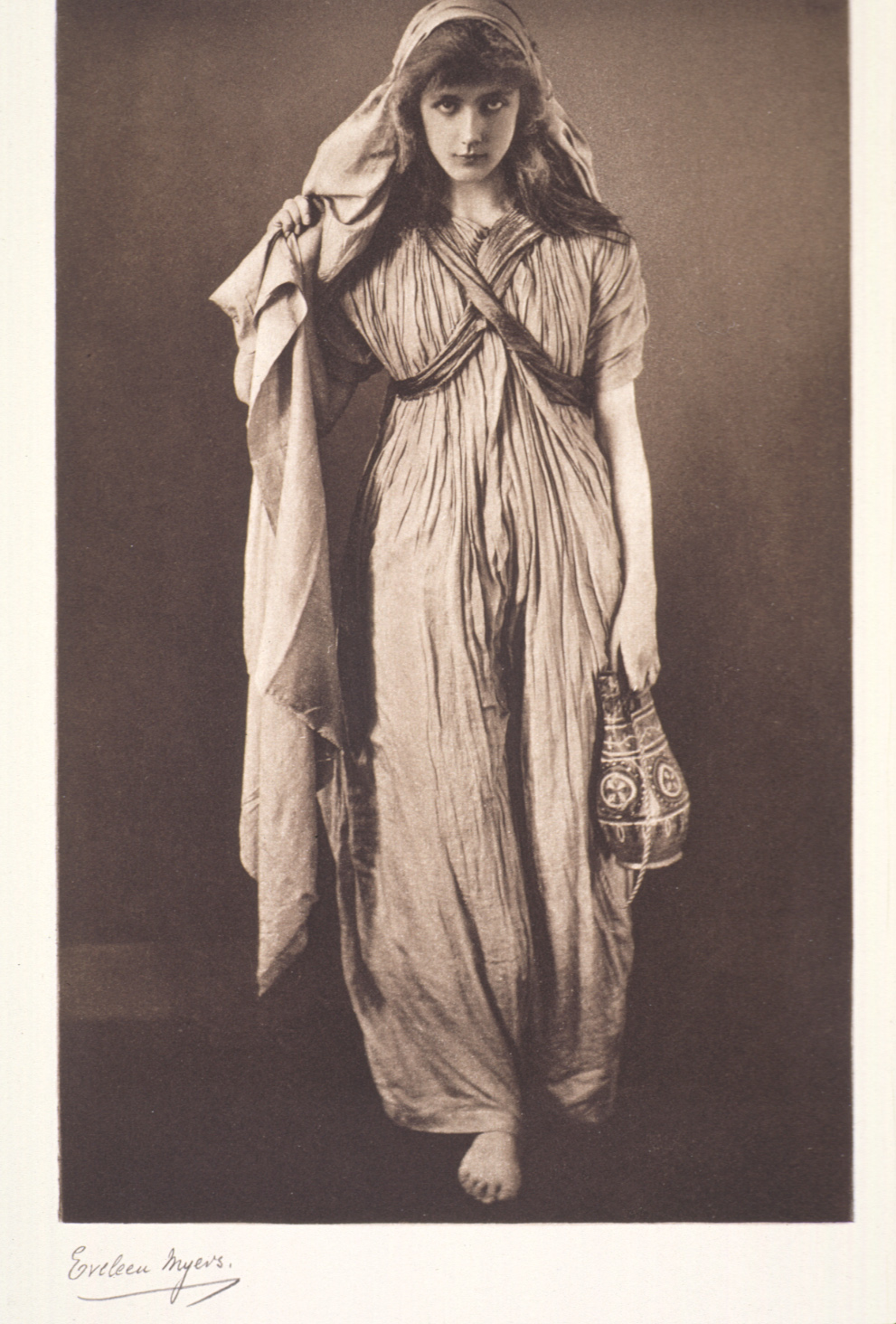 Rebekah is one of the most prominent women in the Hebrew Bible—a woman, whose act of kindness, decidedly shapes her future:

Rebekah went one evening to fill her water-jar at the well. As she was returning, a stranger in charge of a string of laden camels stopped the comely young girl and asked for a drink. She gave it to him and offered to draw water for his camels as well. He bestowed upon her a gold earring and two gold bracelets. The man was [Eliezer,] Abraham’s trusted servant, sent to find a wife for his master’s son Isaac from among his kinfolk. Having earlier enlisted the help of an angel, he knew that this was the girl he sought.[1]

In this image, photographer Eveleen Tennant Myers (British, 1856-1937) pays homage to an important female figure, but also establishes herself as an artist of merit—one that employs skillful darkroom techniques, staging, and an austere composition to create a truly modern photograph.

Myers was born in 1856 to English society matron Gertrude Collier Tennant (1819-1918). Her mother’s connections and patronage of artists, and her own social position, allowed her to pursue her interests as a freelance artist, rather than a commercial one who depended on a steady income to make a living. Through her mother, Myers was acquainted with the cultural elite of her time: the writers Gustave Flaubert and Victor Hugo and painters Edward Burne-Jones, Frederic Leighton, and Edward John Poynter. As a girl, she was a sitter for Julia Margaret Cameron and this encounter had a profound impact on her pursuit of photography.[2] As a young woman, she sat for some of England’s most prominent painters, including John Everett Millais and George Frederick Watts, and became familiar with the act of being a model.

Myers married poet and psychical researcher Frederic William Henry Myers (1843-1901) in 1879. He had seen her portrait by Millais, and exclaimed to his friend, the writer George Eliot, “I have fallen in love with the girl in that picture.”[3] Around 1888, in the early years of motherhood, Myers began her work as a photographer using her own children as models.

Working under the well-known Cambridge photographer, Albert George Dew-Smith (1848-1903), Myers developed a firm grasp of the technical and expressive subtleties of the medium. Her experience as a model allowed her to develop an easy rapport with her subjects—the politicians, scientists, scholars, writers, and artists of her day—and assisted her in becoming a successful portraitist. Wanting to develop her artistic practice she worked to perfect her “pictorialist” compositions and darkroom techniques—she experimented with poses, settings, and costuming, and, like Cameron, often emulated poses and compositions of great master paintings.[4]

Rebekah at the Well, created in 1891, is one of her best known “aesthetic” photographs. It establishes Myers as an important women photographer in late Victorian England. In depicting the Biblical matriarch, Myers implores the staging and costumes she might have seen in amateur theater productions, but it’s the austerity of the figure that makes the photograph modern.[5] A critic of the day noted that Myers masterly handles the drapery of Rebekah’s robe, “reminding one of the folds of a Greek chitôn in some marble of the Attic age.” Her expertise in the darkroom is demonstrated in the tonal values achieved in the model’s dark hair and folds of her gown. “The structure of the living person is felt beneath the dress, which clothes but does not conceal the limbs.” [6]

As we celebrate Women’s History Month, I chose this work as its creation involved a number of women: the women who played a role in creating an artist, Myers’s mother and Cameron; Rebekah, the woman who inspired the image; the model; and Myers, the photographer who constructed Rebekah at the Well.