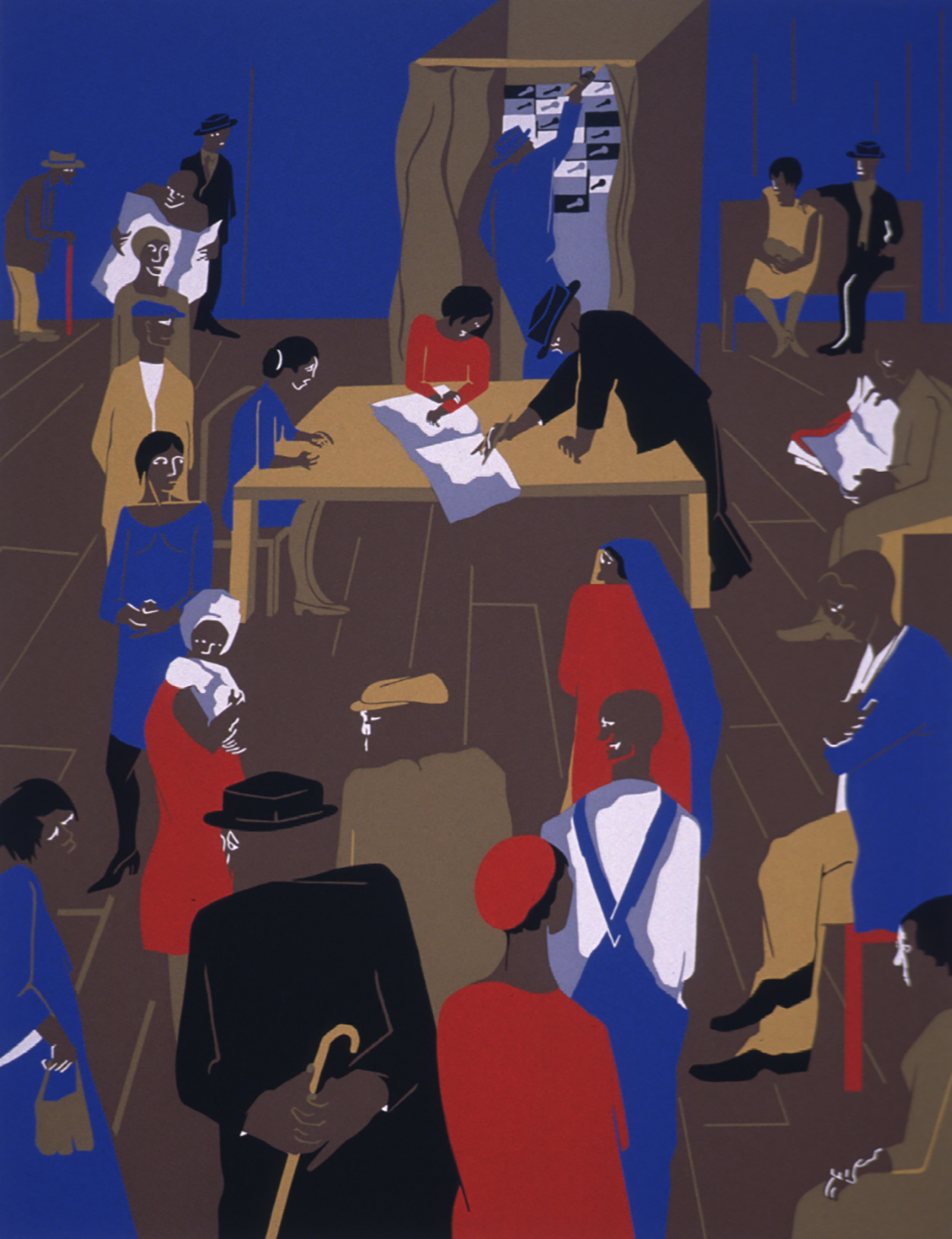 Printed in 1974, decades after his celebrated Migration Series, Jacob Lawrence’s The ‘20s…The Migrants Arrive and Cast Their Ballots depicts Black Americans casting their votes in an election.[1] The screenprint was produced on the occasion of the American Bicentennial, part of the Kent Bicentennial Portfolio, for which contributing artists were asked to the respond to the question, What does independence mean to you?

Like much of Lawrence’s work, this print focuses attention on the African American experience. Here, we see Black Americans exercising their right to vote—a right that was systematically suppressed in the Jim Crow South, from which millions migrated to the North and West during the Great Migration.

On Wednesday, January 6, we saw the historic election of Georgia’s first Black senator—and only the second Black senator from a former Confederate state since Reconstruction. This landmark victory, and that of Georgia’s first Jewish senator as well, points to a marked shift in the Georgia electorate and increased voter turnout, especially among Black voters.[2] However, we also witnessed events in the nation’s Capitol whose consequences are still unfolding; events that are rightly eliciting anger, sadness, disappointment, and fear; events that will require much more time to process, unpack, and understand. Turning to Lawrence’s work at this juncture may help reconcile the past with the present moment: Lawrence’s work so often captures the messy complexities and contradictions of America and its history—a history whose ideals of freedom, liberty, and equality are inextricable from realities of subjugation, suppression, and violence.

When describing his Migration Series, Lawrence wrote, “To me, migration means movement. There was conflict and struggle. But out of the struggle came a kind of power and even beauty.” There is no doubt that, as a nation, we remain mired in conflict and struggle, that one century after the scene in The ’20s …The Migrants Arrive and Cast Their Ballots, voting—and the right to vote—is as fragile as ever. However, hopefully out of this struggle we can emerge stronger and, as Lawrence believed, find beauty in that strength. First we need to truly reckon with where we are as a country, and take steps to repair what is broken.