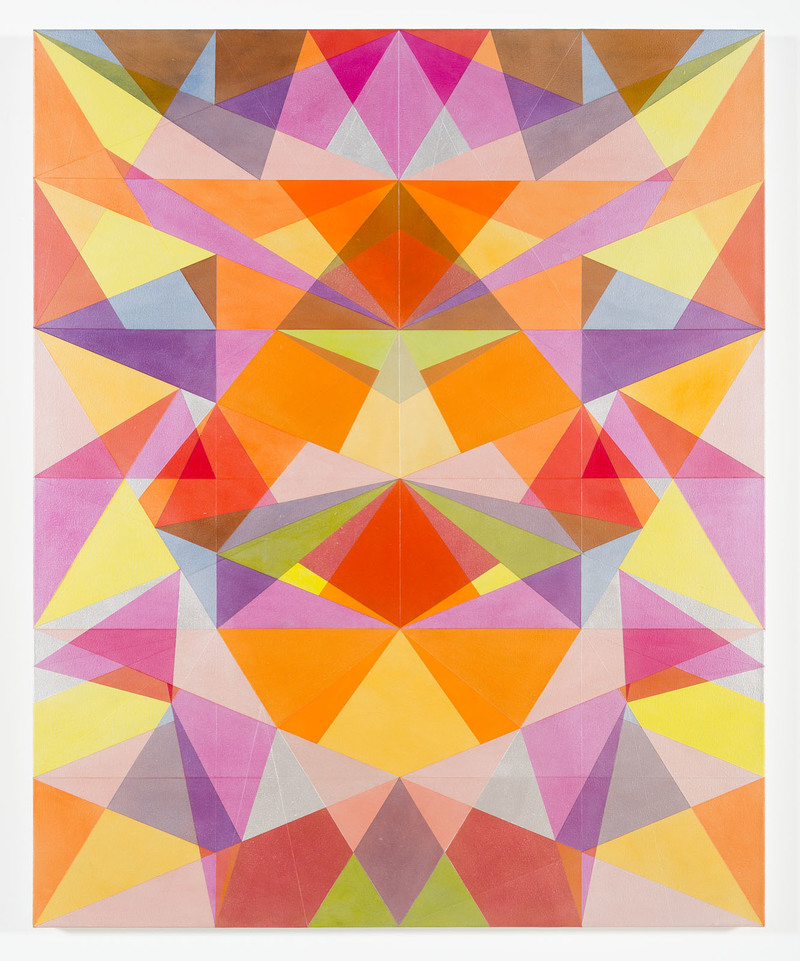 Acquired last year and newly installed in SAM’s third floor galleries, Jeffrey Gibson’s 2017 painting Between Rabbit and Fox is a commanding and alluring work. Measuring 70 x 50 1/8 inches, the painting’s luminous acrylic and graphite surface, with its alternating and overlapping blocks and triangles of color, captivates from even across the gallery.

A citizen of the Mississippi Band of Choctaw Indians and also of Cherokee heritage, Gibson grew up between the United States, Germany, and Korea. Much like his personal background, which evades easy categorization, Gibson’s artistic practice engages a wide range of materials, ideas, and forms. He has characterized his mode of making in the context of anthropophagia, borrowing from Brazilian poet Oswald de Andrade (1890-1954), whose concept centers on the idea of metaphorically cannibalizing, or absorbing, other cultures as a way to gain strength and assert creative autonomy.[1]

Abstraction is inextricable from the long and unique histories of Indigenous visual and material culture in America. Gibson, deeply invested in these histories, also forges his own connections to Modernist geometric abstraction. Whether he blends the hard edge abstraction we see in parfleche designs with the abstraction of Modernist painting, or reimagines traditional beadwork for entirely new applications, Gibson is able to succinctly explore complex themes of cultural hybridity and the history of abstraction and craft.

Gibson has, over time, learned to embrace and celebrate a certain state of “in-between-ness”—being between different cultures and different aesthetic histories.[2] And as the title of the painting Between Rabbit and Fox suggests, even the pattern we see is in-between. Like a highly abstracted Rorschach test or Magic Eye stereogram, our eye flits about the surface of the canvas, seeing both a stylized rabbit and fox flash before our eyes. This state of indeterminacy—of being in flux—is important for Gibson, and it’s important for us, as viewers, to experience and embody this hybridity (if even for a moment) as well.

Image: Between Rabbit and Fox, 2017, Jeffrey Gibson, acrylic and graphite on canvas, 70 x 50 1/8 in., Purchased with funds from the Contemporary Collectors Forum and General Acquisition Fund, 2019.30 © Artist or Artist’s Estate