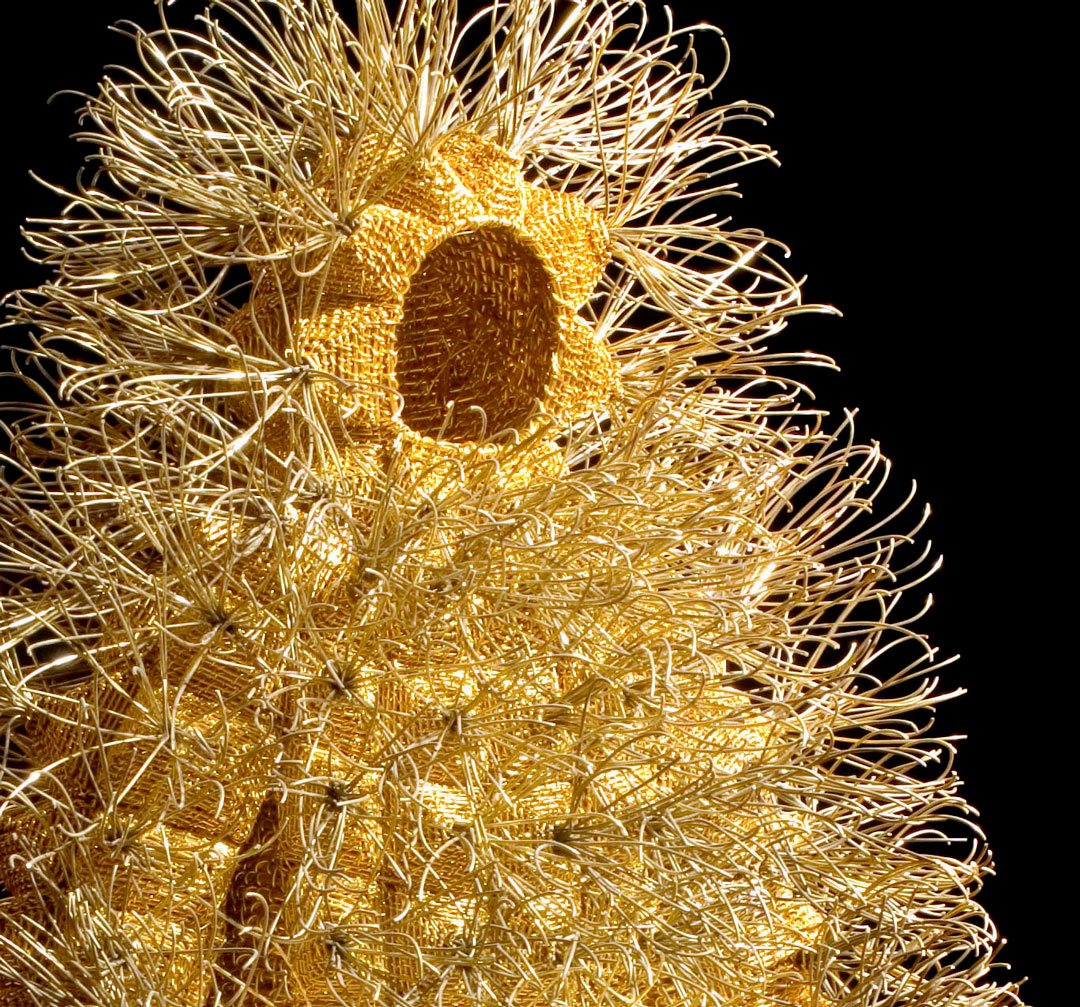 I wrote Walter Oltmann this morning to let him know I missed seeing his suit. Whenever I walk through the galleries, it always lures me in with its gleaming corona of gold bristles. Who dares to wear a suit that merges their identity with a caterpillar? We know Spider-Man and Batman embody the superhuman strength of hybrid gene pools, but the fuzzy caterpillar is not in that realm. The courage of the artist to envision this unheard of combination inspires new thinking––about how we relate to bugs, to defensive barriers, and to “other” identities. Of course, today, the word corona sticks out.

Walter writes back from Johannesburg, a city filled with lots of wire barriers. He, on the other hand, is a very calm and careful man who doesn’t bristle at all. He let me know that South Africans are now on total house confinement, no walks allowed. Everyone is concerned about the potential spread to communities that are ill equipped to handle this pandemic. At the moment, he’s busy working and has a new exhibition coming up. So many artists savor isolation, the chance to let their minds move freely, and focus on what to create. One upside of this time is the reminder that being quiet and alone is not to be feared.

But back to why this caterpillar stands out. It has a most unusual point of inspiration, conveyed in the opening line of a book, “As Gregor Samsa awoke one morning from uneasy dreams, he found himself transformed in his bed into a gigantic insect-like creature.” Franz Kafka wrote this to begin The Metamorphosis, published in 1915, a novella that tells the story of Gregor, a travelling salesman who is trapped by the tensions of not fitting into any social world. He works tirelessly for an oppressive firm, his family exploits his income, and he’s filled with tormented anxieties. So he wakes up and can’t move, and has been turned into an outcast insect. Right now, we are also waking up and unable to move in our usual routine.  The new normal is lock down.  We don’t have an insect body to contend with, but we do have the constant surrounding of the unknown keeping us on edge.

Meanwhile, Walter continues to weave wire, a medium he chose deliberately. He recalled seeing it used to create barriers for Johannesburg gold mine dumps and road embankments, and thought about how it was inexpensive, but underestimated, as he first wove carpets out of it. He also cites the way women of the KwaZulu-Natal region have woven with wire, and particularly colorful telephone wire that continues to be made into baskets. For this caterpillar, Walter chose gold anodized wire to elevate the insect to new heights. Gold has luminous and enduring allure, both as monetary wealth, and as a choice for the making of holy relics with images of saints and gods. Can a caterpillar be a new version of a very different kind of saint?

The 2015 PBS documentary Of Ants and Men highlights the life and work of famed American biologist E.O. Wilson, and highlights the often-overlooked value of insects in our ecosystem.

As Walter once said, “Spending an inordinate amount of time on making something that is usually considered insignificant, like an insect, does make us look differently at them. Observing misunderstood insects closely and interpreting them on a magnified scale throws up their particular adaptations and plays with our perspective that is fixed on their mechanical features and alien behavior and the threat they pose to us.” So here is a caterpillar that is inviting us to wear its suit, as we’re in the midst of an unprecedented metamorphosis, and ideas that encourage new awareness of the species on the planet, beyond human control, who are bound to be part of our transformation.