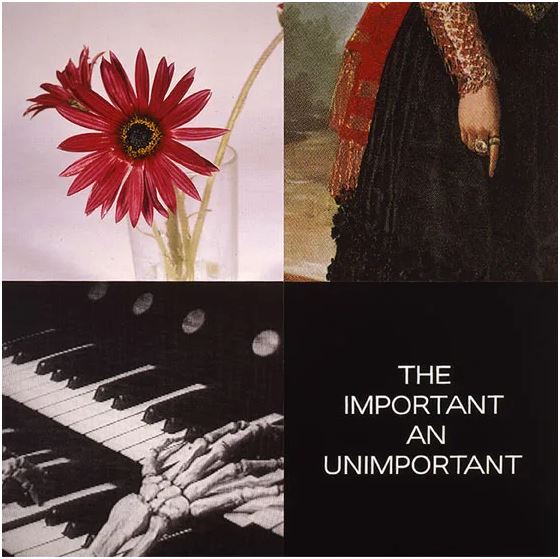 Since John Baldessari’s death last week, there has been a commensurate stream of articles recounting his outsized influence as a pioneering artist and educator, with a prolific career spanning decades.

With beginnings as a painter, Baldessari, like many artists of the 1960s and 70s, eventually gravitated toward conceptual art and the pre-eminence of ideas over objects. However, unlike many of his contemporaries, Baldessari imbued his conceptual art practice with humor and wit, employing “a sort of Dada irony and sometimes colorful Pop Art splashes . . . to rescue conceptual art from what he saw as its high-minded self-seriousness.”[1]

Baldessari’s enduring interests included the relationship between text and image—which often meant pitting them against one another to challenge their assumed accuracy—and the appropriation of images from photography and film. His 1999 painting, The Important an Unimportant (from the Tetrad Series), in SAM’s collection is an exemplar work in this regard, a combination of digital printing, hand lettering, and acrylic paint on canvas.

The composition, made up of quadrants, juxtaposes square images—a glass with red daisies, a woman’s finger pointing down, and two skeleton hands playing an organ—with a textual element that reads, “the important an unimportant.” If these sequences appear heterogeneous and somewhat anachronistic, it is because they are. For example, the excerpt in the upper right is lifted from Goya’s 1797 painting The Duchess of Alba, painted while the duchess mourned her husband’s death. In the lower left, a still from Erich von Stroheim’s 1928 silent film, The Wedding March, is a not-so-subtle harbinger of the fate which befalls the romance and aristocratic aspirations of the film’s protagonist lovers. The text in the lower right, even, is an excerpt from Portuguese writer Fernando Pessoa (1888-1935), “for whom nullity was a muse.”[2]

Taken together, these citations enrich our understanding of Baldessari’s wide range of influences. And whether we know the exact origins of his chosen references or not, the appropriated images and texts are here imbued with new meaning. We are invited—and, importantly, required—to participate as viewers to consider their relationship to one another and the history of visual representation more broadly.

A serial creator, Baldessari always adhered to his now-famous maxim to “not make any more boring art.” A simple enough credo, such a motivation directly impacts us as viewers, who are on the receiving end—simultaneously empowered and challenged by his work. Perhaps best articulated by New York Times art critic Roberta Smith, “[Baldessari’s] work amuses, unsettles, questions and makes you look twice and think thrice; laugh out loud; and in general gain a sharpened awareness of the overlapping processes of art making, art viewing, and art thinking.”[3]

Image: The Important an Unimportant, 1999, John Baldessari, digital printing, hand lettering, and acrylic paint on canvas, 94 x 94 in., Gift of the Virginia and Bagley Wright Collection, in honor of the 75th Anniversary of the Seattle Art Museum, 2014.25.6 ©️ Artist or Artist’s Estate