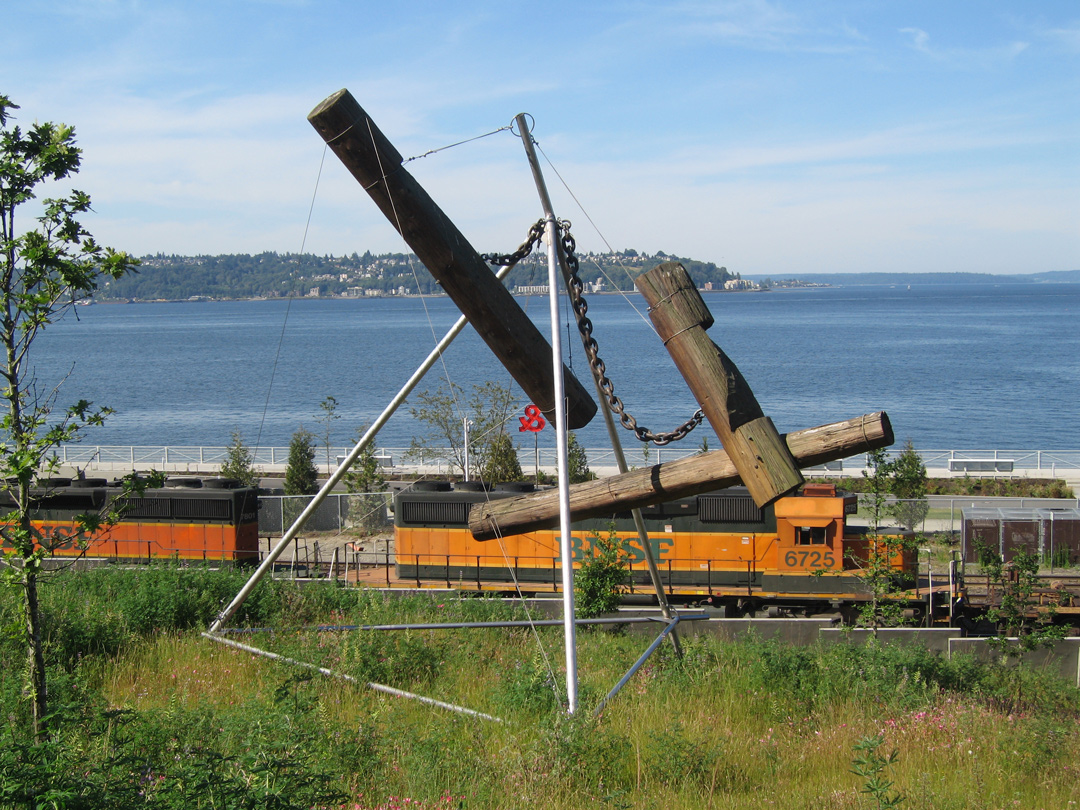 A brilliant conservator[1] once noted that “art conservation is a fight against entropy.” This is especially visible for works sited outside which require conservators, artists, and stakeholders to carefully consider what is essential for an outdoor sculpture to continue to exist for future generations. When the carved cedar elements of Mark di Suvero’s sculpture Bunyon’s Chess were no longer structurally stable, di Suvero and his studio worked closely with the Seattle Art Museum to explore the artwork and discover solutions.

Bunyon’s Chess was created by Mark di Suvero in 1965 for Virginia and Bagley Wright’s residence in Seattle. The family’s documentation of the creative process provides wonderful insight into the artwork. In 2006 the Wrights promised the work to the Seattle Art Museum and it was moved to the Olympic Sculpture Park. The cedar elements had begun to show degradation in their original site but this accelerated at the park partially due to the exposed location and partially due to the natural deterioration of cedar. As cedar ages in an outdoor setting a number of events occur: the natural biocide slowly migrates out with water, the wood absorbs water at an increasing rate as it deteriorates, fungal deterioration is common, as well as insect and wildlife damage. The logs of Bunyon’s Chess were treated annually with a fungicide to slow the fungal deterioration but without major visual interventions such as end caps or moving the sculpture to an interior location, deterioration continued at a fairly rapid pace. In 2009 an in-depth condition assessment was performed which determined that the deterioration, particularly on the interior had progressed to a state where the logs were in danger of falling. In 2010, the logs were consolidated, the large losses filled and the exterior coated to prolong the life. During this period research and conversations with di Suvero regarding the replacement were begun as this treatment could not prolong the life of the cedar indefinitely. Di Suvero determined that new logs could be carved to replace the original cedar, as it is the visual integrity of the work that is important.

After much research, new cedar of the similar dimensions and tight ring growth was sourced for carving. Seattle artist Brian Beck peeled the logs in preparation for carving.

Kent Johnson and Daniel Roberts from di Suvero’s studio traveled to Seattle and carved the new logs using the original cedar elements as a guide.

Beck worked with Johnson and Roberts to create the same join between the two logs. Much of the original hardware such as the 36” bronze bolts and galvanized steel eyehooks were presevered and reused on the newly carved elements.

If you look carefully, at the top of the sculpture you will note a slight bend in the top tube. Di Suvero wanted this natural bend to remain but believed this opportunity should be used to reinforce the structure.

Fabrication Specialties Ltd. worked with the di Suvero studio to create an interior support which was welded in place.

The logs were strung with new stainless steel cabling and were carefully measured and marked to the lengths of the original cables to assist with the rigging. Larry Tate, Andrew Malcolm, Tracy Taft, Ignacio Lopez, and Travis Leonard of Fabrication Specialties placed the new logs within the original steel frame working closely with images and a model of the original. The di Suvero studio generously participated in video calls throughout the day.