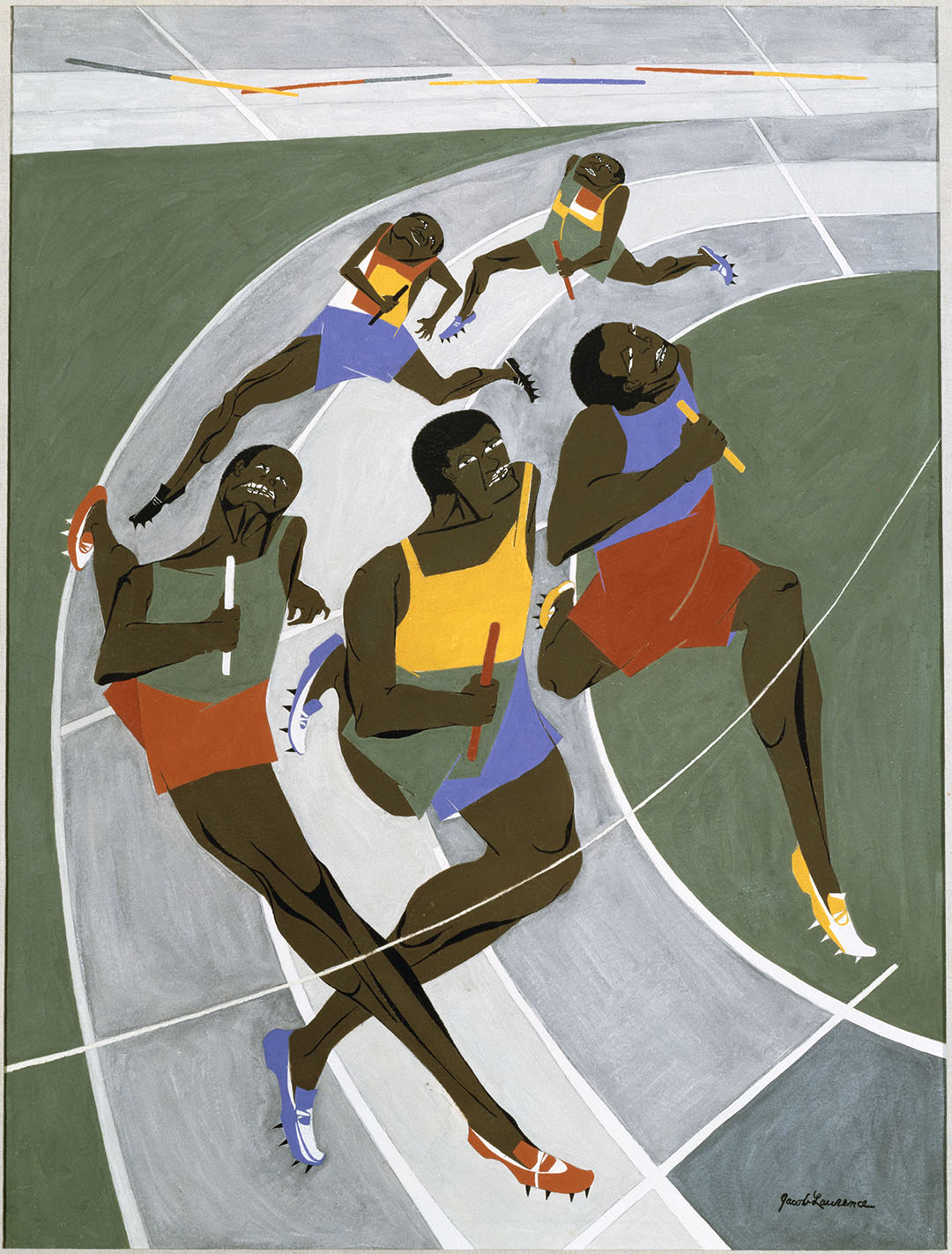 I always loved running—it was something you could do by yourself and under your own power. You could go in any direction, fast or slow as you wanted, fighting the wind if you felt like it, seeking out new sights just on the strength of your feet and the courage of your lungs.

One of 29 artists commissioned to design a poster for the 1972 Summer Olympic Games in Munich, Jacob Lawrence chose to highlight the achievements of Black athletes.[1] In his Study for the Munich Olympic Games Poster, five runners, depicted in Lawrence’s characteristic graphic flatness, recall the figurative style of Greek vase painting—an apropos homage on the occasion of the Games of the XX Olympiad.

The iconic colors of the five interlocking Olympic rings—blue, yellow, black, green, and red—recur throughout the study, from batons and jerseys to shorts and shoes. Framed by the curvature of the track, the runners’ physicality and strength are difficult to ignore. Together, their musculature, movement, and form encapsulate the excitement and competitive finish of the relay—where gold, silver, and bronze are determined by mere tenths of seconds.

Known for his stylistic experimentation and depictions of African American life, Lawrence’s commission also has special importance within the context of the Civil Rights Movement and history of the modern Olympic Games. Created only four years after the 1968 Mexico City Summer Olympics, and on the occasion of the first Olympics held in Germany since 1936, his representation of Black athletes is especially meaningful.

In the 1968 Olympic Games, American athletes Tommie Smith and John Carlos respectively won the gold and bronze medals in the 200 meter race.[2] Upon climbing the podium, with the Star Spangled Banner playing behind them, both Smith and Carlos, donning black gloves, raised their right and left fists and bowed their heads—a symbol of protest and strength on an international stage.[3] Though interpreted by many as an explicit demonstration of Black Power, for Smith, it was a human rights salute: “It was a cry for freedom and human rights. We had to be seen because we couldn’t be heard.”[4] Just 32 years earlier, in 1936, the Summer Olympics were held in Berlin. Though Germany had won the bid in 1931, prior to the rise of the Nazi Party, Adolf Hitler’s rhetoric of white supremacy and antisemitism was already well established. For Hitler, the Olympics became a stage upon which Germany could prove his theories of racial superiority. It was within this Olympic setting—in which athletes of color and Jewish heritage were openly discriminated against—that Owens won four gold medals, set two world records, and came away the most successful athlete of that year’s games. For Smith, Carlos, and Owens, these Olympic victories allowed them to transcend—and publically challenge—the political divisions and discrimination taking place in the United States and abroad. Similarly, Lawrence’s Study for the Munich Games Poster, depicting all Black athletes, is an important work that finds its place within this complicated history of the Olympic Games.