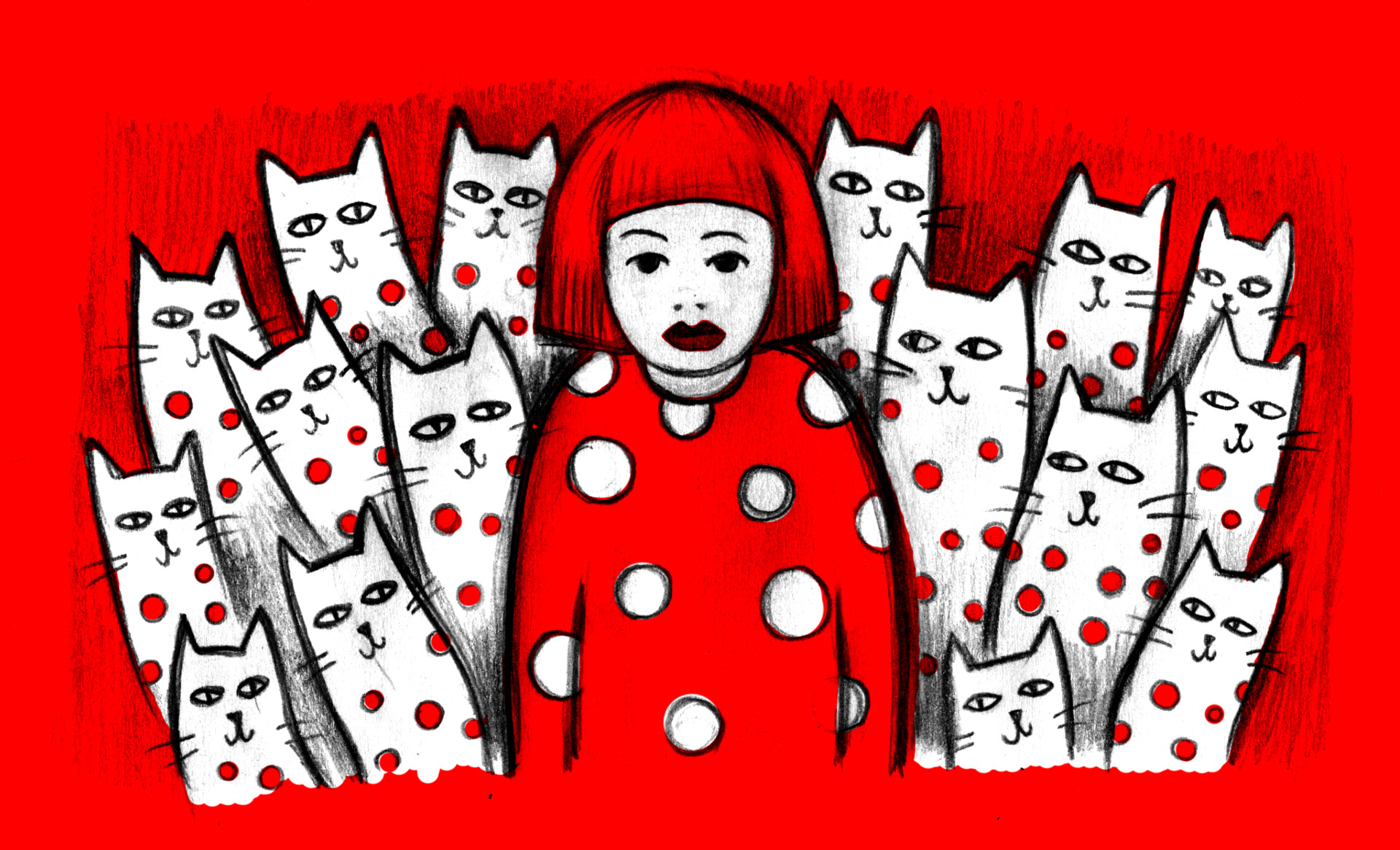 Yayoi Kusama’s visual art output is prolific, but did you know that she was also a writer? Beyond penning her autobiography, Infinity Net, in 2002 she is also the author of Hustler’s Grotto (1992), a collection of three novellas written between 1983 and 1992, and various books of poetry. Stay tuned to this blog series for a focus on Violet Obsession (1998), a collection of Kusama’s poems paired with images of her performative work including her Happenings and her activations of her Infinity Mirror Rooms. We’ve invited SAM staff to spend some time with Kusama’s poems and select a piece that speaks to them. We’ll be sharing selections from Violet Obsession alongside the musings and inspirations of SAM Staff. The exhibition, Yayoi Kusama: Infinity Mirrors is on view at SAM through September 10.

SAM’s Copywriter and Content Strategist, and an author in her own right, Chelsea Werner-Jatzke, gets things started with with her thoughts on one of the more light-hearted poems in the collection.

TURBULENT GARDEN (AT THE PSYCHIATRIC HOSPITAL)

No one appears to have died
it’s even more turbulent on windy days
“meow, meow”—they run around
busy f***ing
they leap about
I’m glad I’m not a cat
I wasn’t born a cat
because I’m not really fond of all that f***ing

For me, the first appeal of this poem is the repetition. Kusama’s concerns with reproduction ad infinitum are clearly linked with breeding in this poem in a way that a work like Infinity Mirror Room—Phalli’s Field only implies. But in this poem, as in her visual work, what she reproduces is imagery, not just words (though the refrain of “cats” does reverberate throughout). Disfigured cats nibbling on a sliver of moon or batting around stars, never dying and endlessly multiplying are the fish tails and rice (rather than meat and potatoes) of the poem. But, it’s the turn that occurs at the end, when Kusama interjects in the first person, that lifts the poem above a landscape of feral felines into a psychological setting, all too fitting given the subtitle of the poem. We are taken directly into Kusama’s self proclaimed issues with sex at the end of this poem in a straightforward way. In her autobiography she talks at length about her fear of the phallus as the impetus to creating the soft sculptures that have appeared often in her work: in frames on wall, on furniture and boats, and in her Infinity Mirror Room. In contrast to the sheer volume of this motif in her visual work, her quick mention of being glad she’s not a cat allows the poem to be a playful menagerie in some undying garden, only lightly touched by human influence. I think immediately of Turtle, my childhood cat. For weeks my brother almost had me convinced that she was a robot, until I saw her give birth. My father found her on a construction site in Manhattan on his walk home from work. She must have already been pregnant when he brought her into our tiny apartment. A few weeks later my parents pulled me out of elementary school in the middle of the day to come witness the birth of two kittens. Turtle caused another kind of issue at school: inquiries as to if everything was OK at home in response to the large and numerous scratches on my arms. Turtle didn’t take to domesticity and ran away within the year. We eventually gave her kittens to a neighbor. Turtle might not have liked being a mother, but she taught me how to climb trees.