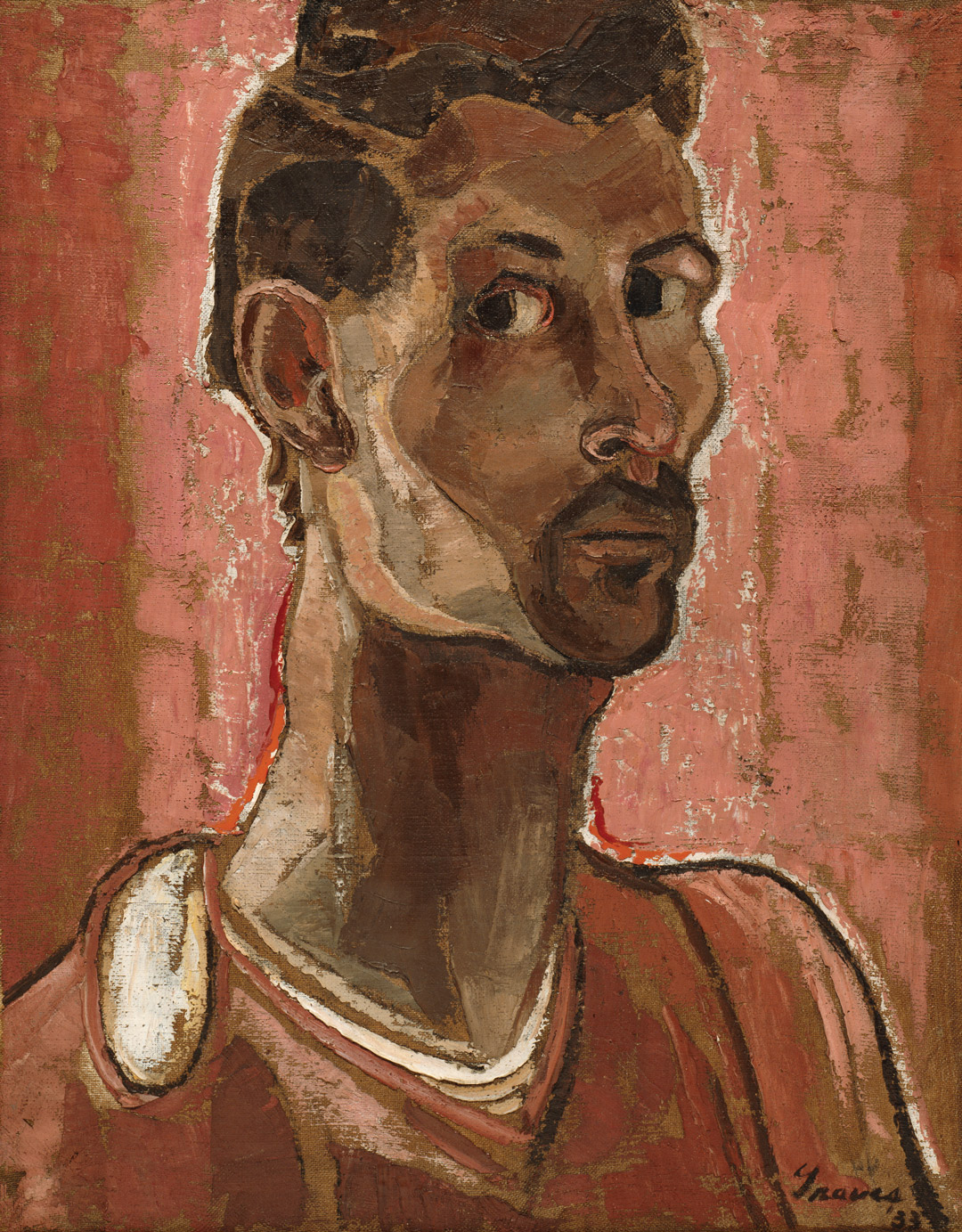 One day here at SAM I received a phone call from a visitor who had enjoyed her time at the museum and who had felt particularly attached to a couple of the paintings here, and who was sorely wishing she had written down the name of the artist because his work was really touching. There was one, in particular: It was a portrait (a self-portrait, she wondered?), and the man had a moustache (our van Dyck, I wondered?), and she thought she remembered there were other portraits of the same guy in that room. Ah. Morris Graves.

The facial hair was a helpful descriptor, but so was the defining characteristic this woman singled out when describing the painting: vulnerability.

Graves’s Self-portrait of 1933 is a rare subject for the artist, who most figured was too private a man to put himself out there by painting himself much. Against a soft abstract background, his form emerges, defined by a rhythmic, undulating outline. His head is perched upon an impossibly long neck. He gazes sidelong out of the canvas with a look that wants to tell us something, and many have thought they knew exactly what.

Graves, though, was a hard character to pin down. He was interesting. Frederick Wight, who was director of the Art Gallery at UCLA, met Graves and later described him as “an exceedingly tall thin figure, with large transfixed, rather alarmed eyes . . . He is shy and self-aware to a degree, aloof yet (you suspect) ruthless in his self-determination . . . In short he is very birdlike: receding, private, mobile, and migratory . . . he has the willful steely quality of a bird—its fierce capacity to survive.”

Nancy Wilson Ross, a friend and confidant of Graves’s, called him “mysterious,” saying he carried moods redolent of changing seasons. Ross ended on the same comparison as Wight: “Like the birds Graves knows so intimately, he is a migratory creature; not so much willfully nomadic as purposefully so.” Author Margaret Callahan attached some curious distinctions to Morris Graves when publishing the photo in The Seattle Times in 1948.

No doubt Graves’s seasons of mood meant that he left different impressions on the many who encountered him. Besides, perceptions vary: “steely” and “birdlike” to one might look like unapproachable and withdrawn or even admirably stoic to another. We might get a totally different animal to fill the metaphor.

Theodore Wolff, an art critic who produced a catalogue essay on Graves, was struck by his encounter with the artist—so moved that he typed up the following letter:

Dear Morris:
Just a word to say how very happy I am to finally have met you. I am most particularly pleased at the extraordinary quality of strength and sturdiness you radiate; you resemble your Joyous Young Pines much more than you do any of your birds (!!).¹

One would think that going to the source would provide clarity, but Graves’s own letters produce more questions, revealing more quirks and intricacies of character. He is alternately kind and sensitive, harsh and resentful. There are moments of resolute pride and of defeated self-doubt. At times Graves is fully convinced of his importance and the value of his art. On December 5, 1932, at an early stage of his career around the time he produced his Self-portrait, he boasted in a letter to his intimate friend Merita Mills:

I know I can paint in all the violent color and draw all the magnificent lines I want to someday, and be thrilled with the results; smug as it sounds, I just am unavoidably sure I can do it.²

The verve with which he began his career finds a sad bookend in the self-deprecation that shows up in some of his last letters. In 1997, Graves wrote to SAM curator Vicki Halper, saying

My painted images have, somehow, only been very minor Shinto haikus trying to communicate my mind’s range of humanitarian, rational, and irrational experiences and ideas.

I’m a fifth-rate rural American painter of the 1930s and 40s. I gladly surmise that you have all along been aware of this.
–Morris³

What makes the Self-portrait so fascinating and magnetic is that it seems to reveal something of how Graves saw himself. But what’s in a self-portrait? Are we really learning anything? As a description of oneself, is it any more truthful than another’s description—or any more complete? For me, a self-portrait does reveal; it just doesn’t reveal everything. No one picture, in paint or in words, could convey all the complexity of Morris or of you or of me, and to think we know him from this painting can’t be quite right.

The Self-portrait doesn’t say everything there is to say about Morris Graves. Gladly, we get more doses of the artist’s self-reflection in the third floor PONCHO Gallery. Hanging right next to Self-portrait is Morning, a painting where the figure, a slender shirtless man, squirms uncomfortably on his bed, a voyeuristic display in front of us. Across the room from these hangs the solitary Moor Swan, a painting Graves exhibited in the 1933 annual show of Northwest artists at SAM, in which it won the big $100 purchase prize. A period photo reproduced here captures Morris with his winning piece, and Morris, it must be said, is looking very birdlike, indeed.

Some have read the Moor Swan as a symbolic self-portrait. I’m okay with that, as long as we remember: He is the bird and the pine; He is the moustache and the swan.