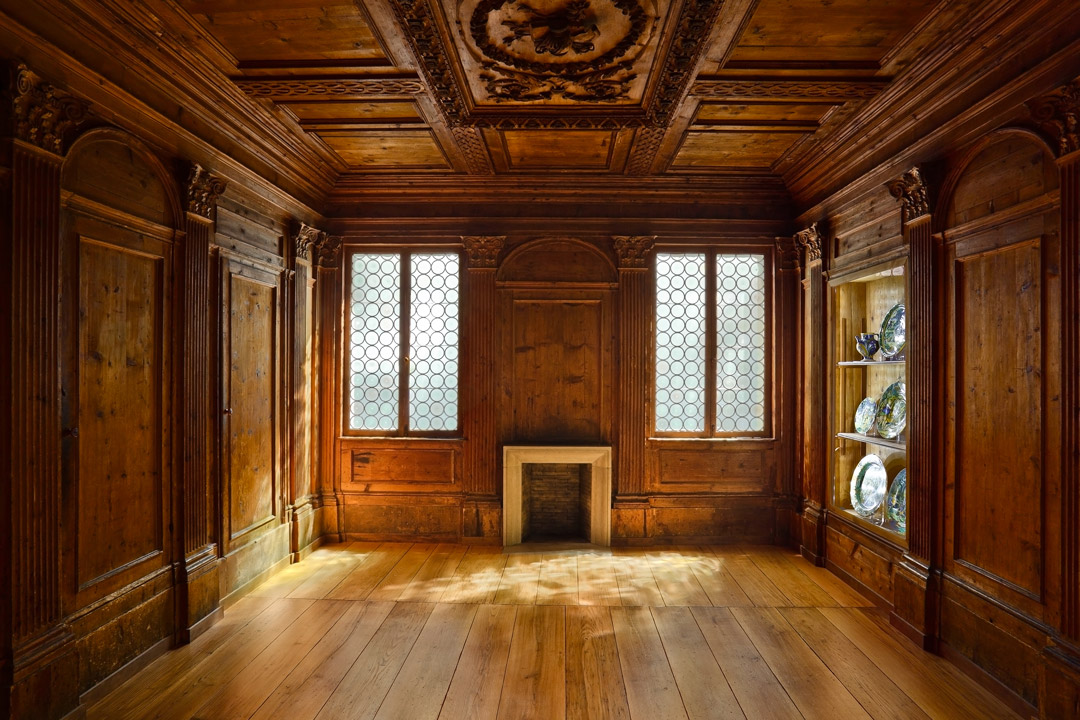 A powerful quality exclusive to older objects is their ability to spark our imagination as we reflect on where in the world these things have been before they arrived in front of us. It can be totally captivating. The display of historic artworks in our galleries at SAM is only the latest chapter in a long story for each of these pieces. The period room installed on the fourth floor—called the Italian Room a bit anachronistically but not without reason—is a great case study in the life of an art object.

The wood panels hang in a metal stud framework erected during SAM’s expansion in the 2000s, but they are installed at the exact angles and dimensions of the historic room’s specifications. About 145 original pieces comprise the installation. How and why did they come here? An Italian art dealer named Renato Bacchi acquired the room in the 1920s from its original installation in a building scheduled to be remodeled, perhaps “saving” it. The building was located in Chiavenna, a town in northern Lombardy, in a breathtakingly beautiful mountainous region. In the mid-1930s the room, in boards, passed from Bacchi to the German-born antiques dealer Adolph Loewi, who installed it in a Venetian palazzo that served as his gallery space. The Jewish Loewi was persecuted by the Fascist Italian government and moved, with his paneled room, to the U.S. in 1939. Loewi had become one of the most successful international dealers in period rooms, and he proved successful once again, finding a buyer in the notable Northwest architect John Yeon, who had encountered Loewi and his paneled room in Los Angeles. The room enjoyed another interesting chapter as Yeon’s dining room in the architect’s San Francisco flat. This custom installation was a highlight of Yeon’s renovation of the once-rundown building that housed it. Ed Hardy later rented that apartment.

After Yeon passed away in 1994 the building was sold, but Yeon’s partner, Richard Louis Brown, saw that the room was professionally de-installed that it might have another life somewhere else. From his own home in Portland, Brown set about finding a new home for the paneled room, and with SAM, he had a taker. The timing was just right; the museum, in plans for its expansion, would finally have the space to consider a permanent display for such a period room. In 2000, Brown officially donated the Italian Room, doing so in memory of John Yeon. Folks were invited to view the conservation and installation of the room in progress, and since the grand reopening of the expanded SAM in 2007, the Italian Room has been a focal point of the collection. In the same year that he brought SAM’s Italian Room to the U.S., dealer Adolph Loewi imported another of the period rooms he would end up dealing: the Gubbio Studiolo now in the collection of the Metropolitan Museum of Art. See, old things have wonderful stories—not just about where they’ve been, but about who and what they’ve encountered along the way.