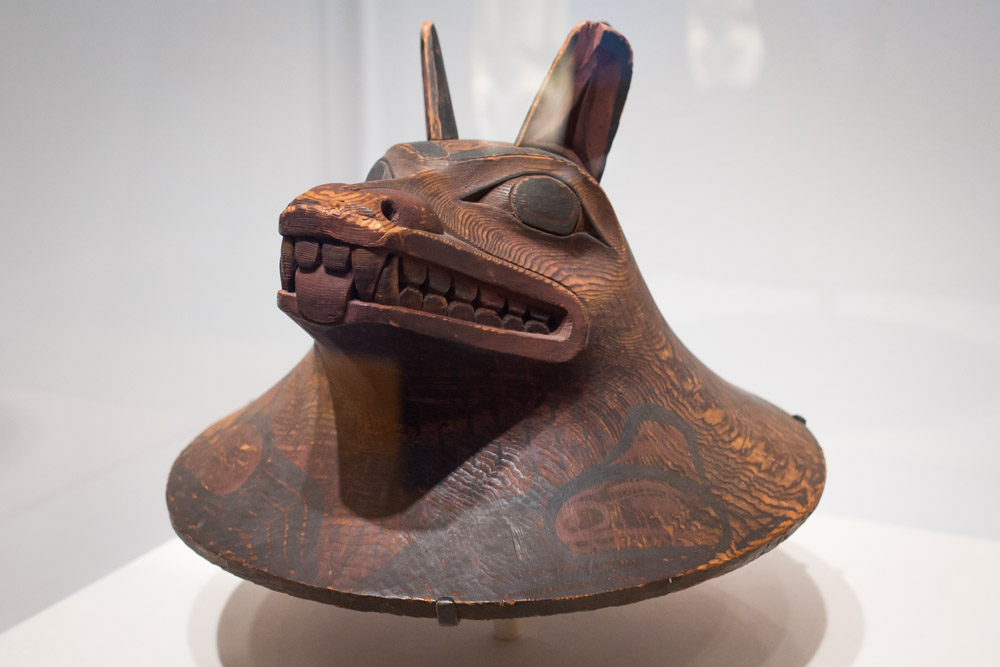 An encounter with a sea bear would not be easily forgotten. Among the Haida people, oral histories sustain the memory of this imposing, magical spirit, with its origins at the beginning of the world. A hybrid animal with features of the whale and bear, the sea bear had all the subtle swiftness of the whale and the predatory power of the bear, carrying the mass and presence of both. Traversing land and sea freely, it commanded respect in all domains. Rows of intimidating teeth, set in powerful jaws, made it so. On the back of its neck, a dorsal fin gave him stability and agility in the water, and when he emerged from its surface, as we see him do here, whomever he encountered would take notice.

Before I learned a little bit about this Haida Sea Bear Crest hat, I might have called it (adjective) animated, pointing out that I see a quality of life and energy reflected in it. Turns out that its maker also intended it to be actively (verb) animated, or even danced. It’s a hat, after all, and it was worn as part of a ceremonial costume. The sea bear marked the crest of a particular family or lineage, so displaying it was a show of family pride. Carved wooden hats—for me, even worse to think about wearing something wooden on your head than wearing something wooden on your feet, so gimme clogs—were common in the art of the Northwest Coast Native peoples. In literature, they’re sometimes called “helmets,” and that is maybe a term we would have an easier time connecting to the sea bear. Over 150 years, wear to the paint and wood has made the hat’s features much more quiet than they would have been. Both carving and painted design were meant to contribute to a striking figure. Today, the red pigment that once animated the lips, tongue, and ears of the sea bear is only barely visible. Without looking closely, one might even miss his serious front claws.

Many people have played a part in the life of this piece, from its maker to its performers, and later, collectors. Two figures from this last category are especially significant to us. John H. Hauberg, who donated the piece in December of 1983, has been a hugely influential contributor to SAM. His foundational gifts established the Native art collection as a strength of the museum and placed it on a level of national regard. Interestingly, Hauberg actually acquired the piece from another well-known figure in this corner of the art world: Northwest Modern painter Mark Tobey. The Sea Bear Crest hat features in the display Pacific Currents, on view now in our third floor galleries. If you find him, peer under the brim of the “hat” to get a better sense for how this artwork would have been worn and performed (and to see the fine work of our world-class mount-makers).