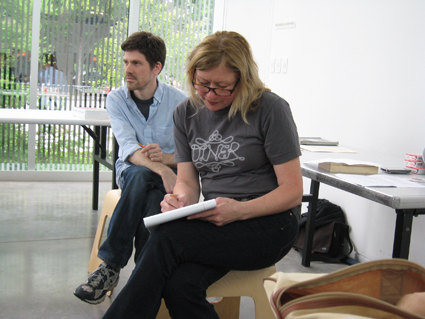 Two weekends ago, on the gloomiest of Saturday afternoons, I had the pleasure of participating in Gretchen Bennett and D.W. Burnam’s “Unconventional Portraits” workshop on songwriting.  Created in conjunction with the Kurt exhibition and Gretchen’s video installation I don’t blame you, the artists put together a day of vigorous writing exercises for those who participated.

Much of the afternoon was spent discussing conventions of popular music the artists had identified: call and response, making a list, and responding to an unexpected interruption were some of the common themes in song lyrics that resonated most with me. The most exciting part of the class was experiencing the playlists Gretchen and D.W. curated and exchanged between themselves prior to the workshop. As we listened to the songs, we were asked to write in response to the music and conventions we were able to identify.  Below are the playlists, for those of you who want to try the exercise on your own (or just experience some great music).

If you missed the workshop, you can see D.W. Burnam perform at the Olympic Sculpture Park on July 22 with Whiting Tennis. You can also hear Gretchen speak on Kurt in this excellent video.

In Space and Time with Gretchen Bennett and D.W. Burnam Playlists

“Welcome Singer” by Roger Ferguson
“You Can Have It All” by Yo La Tengo
“Mini, mini, mini” by Jacques Dutronc
“Find Shelter” by Noah Georgeson
“McDonalds on the Brain” by Daniel Johnston & Jad Fair
“Take Time” by The Books
“Seaweed” by Saul Williams
“Nevers” by The Fiery Furnaces
“I Am The Lion” by Neil Diamond
“Two Wives Are Twice The Problem” by Prum Manh
“Franz Kafka At The Zoo” by The Clean
“Waiting Room” by Holly Golightly
“Piddy” by Rodriguez
“Acid” by Maja Ratkje
“Air War” by Crystal Castles
“Virginia Plain” by Roxy Music
“Live In Fear” by R. Stevie Moore
“Four Freshmen Locked Out As the Sun Goes Down”  No Kids
“Canvas Home”  by Arthur Russell
“Breathin Out” by Kurt Vile
“Whatcha Doin’”  by Phil Elverum & Nick Krgovich
“Stout-Hearted Man” by Shooby Taylor, the Human Horn
“Whistle Past the Graveyard” by Jeffrey Lewis & the Junkyard
“C.R.E.E.P.” by The Fall
“Bricks Crumble” by Dalek
“Anachronist” by Robert Wyatt

“Hows About Tellin a Story” by Devendra Banhart
“Smells Like Teen Spiri” by Patti Smith
“The Spaceboy Dream” by Belle & Sebastian
“Create Me” by Neil Diamond
“Infinity” by The xx
“Two Doves” by The Dirty Projectors
“If Music Could Cure All That Ails You” by Yacht
“Basic Space” by The xx
“Twinkle” by Erykah Badu
“Nineveh”  by David Byrne
“Islands” by The xx
“Paper Planes” by M.I.A.
“No Sense” by Cat Power
“The State I Am In” by Belle & Sebastian
“Ur” by David Byrne