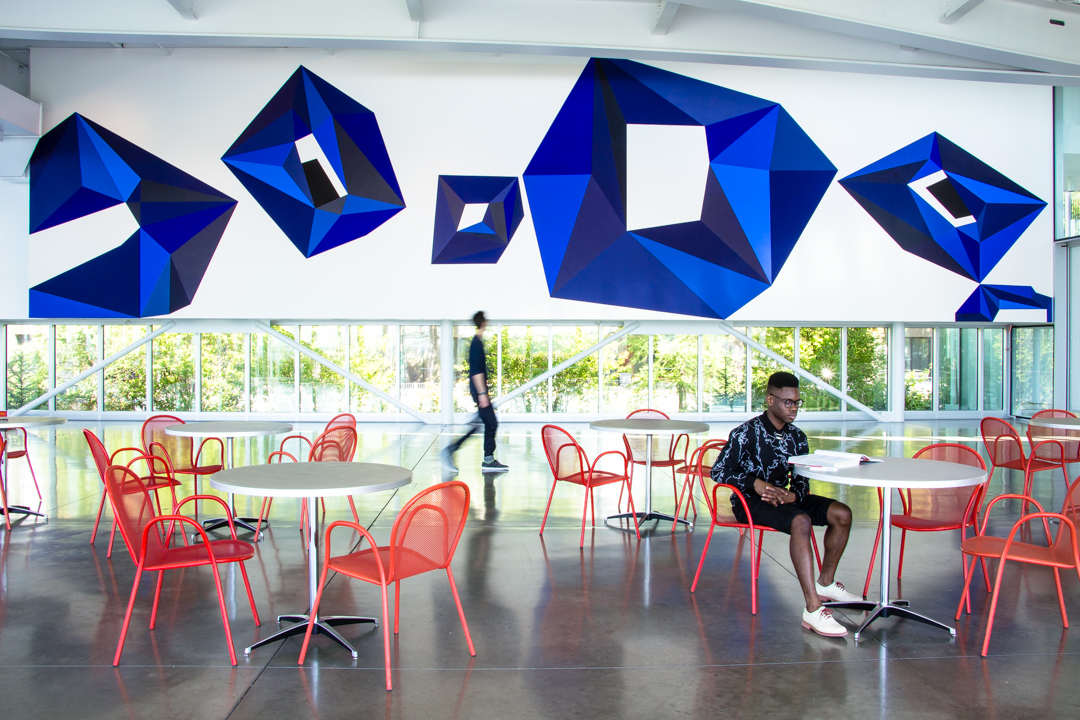 Hovering overhead in the Olympic Sculpture Park’s PACCAR Pavilion is the work of Seattle native, artist Victoria Haven. Blue Sun is a wall drawing inspired by a 2015 video project where the artist filmed the large-scale demolition and development of South Lake Union over a ten-month period. One of the more dramatic examples of Seattle’s rapidly changing urban core, Haven captured over 500,000 still frames through her art studio window and created a time-lapse video piece. Editing and viewing this footage piqued Haven’s interest in the movement of light and shadow and how light impacts a space differently depending on the objects, or in this case architecture, it encounters. With the Olympic Sculpture Park as a canvas for light and shadow, Haven approached the PACCAR Pavilion with a curiosity and intent that she shares with us in this interview about the bold crystalline forms that traverse the entire length of the east wall. Blue Sun closes March 5—don’t miss it!

SAM: How do you see Blue Sun functioning as a sculptural painting in dialogue with the sculptures around it?

Victoria Haven: The first thing I did upon being offered the opportunity to create a work for the Pavilion wall, was to spend many hours in the space considering both the interior architecture (windows, walls, floor, chairs) and the exterior forms in the Sculpture Park; the most visible being Serra’s Wake to the North and Calder’s Eagle to the West. These colossal structures are incrementally transformed throughout the day as dramatic shadows appear and recede, based on the intensity and variety of natural light. I tried to capture this dynamic sensibility in the bold shapes and implied motion of my wall painting.

Also at play are the Olympic Mountains in the distance, which I consider an extended border of the park, as they are visible from nearly every vantage point—including the Pavilion where my work is sited. The composition and forms of Blue Sun are in conversation with these works and others (i.e. Tony Smith’s Wandering Rocks), in terms of scale and geometry, as well as being a direct response to the monumentality of the peaks to the West. There is movement to this piece. Do you ascribe a narrative to the work? If so, is this narrative motion cyclical, linear, other?

There is an implied motion/movement in this work in that it is a sequence of forms presented horizontally, and (for most Western trained eyes) from left to right. These forms create an arc that points to the cyclical nature of the sun’s transit across the sky, referring to both daily and cosmological durations. In this sense, it operates as a narrative—or perhaps a framework or container for a narrative—by addressing two vastly different time-scales via repetition.

The geometric forms of Blue Sun appear in a lot of your work. Why are these forms useful or important to this piece?

I consider all of my work, whether in two dimensions or in three, to operate within the discipline of drawing. Line is the essential component of my practice, and I employ it as a tool which allows me to define and describe space.

When I first began making work that emphasized the space between two and three dimensions (i.e. the Oracles 1999/2009, Wonderland 2004, etc) it looked like a kind of DIY extrusion of the grid. I often begin with a single line or shape that mutates and proliferates to become an expanded wire-frame-like structure. The geometries I employ, though they may suggest mathematical systems, are usually intuitive and wonky. In the case of Blue Sun, I saw it in a flash. I had the vision of a large blue crystalline form repeating but transforming across the space (echoing the sun as it appeared in the time-lapse). It was one of those rare and lucky moments when the ideas that had been gestating in my mind merged instantly with the space in the Pavilion.

My challenge was figuring out how the piece would have the same strength of that original vision, with the emotional punch of something between joy and oppression. The space requires the work to have a powerful visual impact, from afar as well as up-close. To accomplish this I drew from my deep well of mind and body memory; drawing and painting line upon line and edge upon edge to create these enigmatic forms as well as the negative space that defines them. You filmed 10 months of footage for Studio X, the piece that inspired Blue Sun. Did you watch all 10 months of the footage? What was it about the blue sun spots that made them jump out from within so much footage?

Yes!! I not only WATCHED all 10 months of footage, I (along with my studio assistant Elliot Bosveld) edited over 500,000 still frames that became the 24-hour time-lapse video, Studio X—a video projection which documents the radical transformation of this city, shot from the fourth-story windows of my studio in Seattle’s South Lake Union neighborhood.

In the process of filming and editing Studio X, certain recurring patterns unfolded. What struck me most as I sorted through day after day (293 in all) of altered city and sky, was not only the massive construction site my neighborhood had become, but the subtler recurring moments that stood out among the drama; the trees that would appear to wiggle in the distance, and the sun (when it showed up) stuttering across the sky in 30 second intervals. I was captivated by how my low-fi camera transformed the glowing celestial orb into a blue blob, with a halo of fractured pixels and varying values. It was also this aspect of the sun’s repeated and consistent trajectory that opened-up the work beyond the frame-by-frame depiction of gentrification and development on a human scale toward a broader poetic geological timeline. I knew I wanted to isolate this feature and explore an abstract version of this phenomenon. This commission for the Olympic Sculpture Park Pavilion wall provided me with the perfect opportunity to do so. 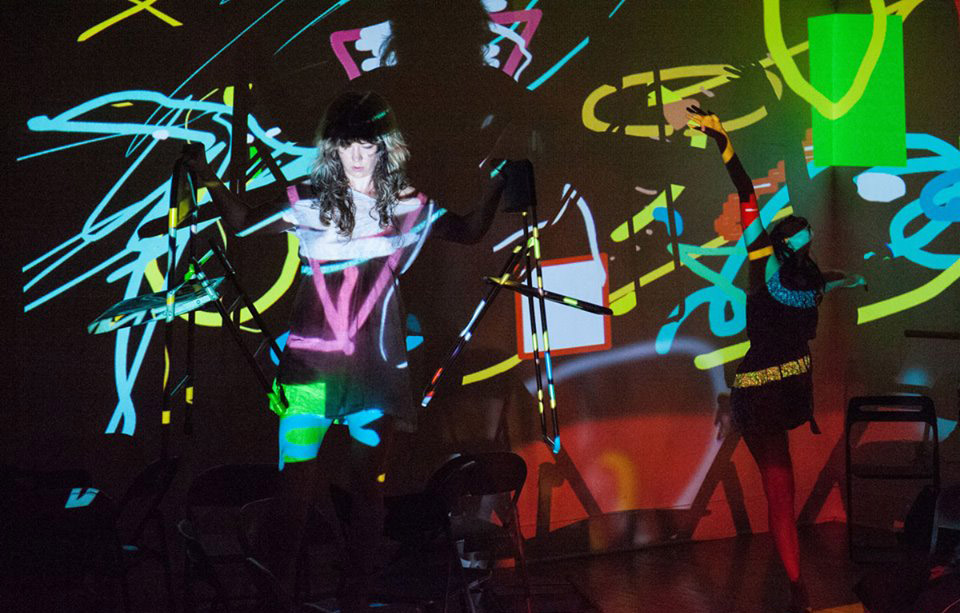 If you’re visiting the Olympic Sculpture Park in the next three months you might encounter the new artist in resident of SAM’s pilot residency program as part of Winter Weekends. Paige Barnes is a movement artist whose dancing is sinewy and soft. Even the angles she creates from ankle to elbow appear like feather tips, tilting and adjusting to the surrounding atmosphere. While at the Olympic Sculpture Park her movements are directed by visitors’ pulses.

Having recently completed a degree at Bastyr University to become a licensed acupuncturist practitioner, Barnes uses a medical vocabulary to describe the quality of the pulses informing her movement, but is not approaching the pulse diagnostically. In fact, once she takes a pulse there is no exchange until after she takes the visitor’s pulse again, after the multimedia performance, and notes any differences in heart rate and quality in reaction to the experience.

“fast flick & that knee flick It’s not the birds but the burrows that wild flying beetle who is all marmalade.” –Vanessa DeWolf, Video: Vida Rose

Far from medical in her vocabulary, is the text of Vanessa DeWolf, a writer working with Barnes who crafts a personalized poem for the visitor in response to Barnes’ dance. Visitors are given this poem, as well as a walking score based on different parts of the body that offers a suggested guide through the park. As Barnes dances, animator Stefan Gruber begins drawing. His digital marks are highly repetitive, leaving ghostly traces behind on the projected image of his work in progress. During a break in Barnes’ movement, bassist Evan Flory-Barnes begins a solo that continues once the dancing begins again. Making her way back across the room, Barnes comes to rest in front the visitor, whose pulse has beat all this creative energy into action. DeWolf reads aloud the piece she’s been writing this entire time and Gruber plays the animated version of the drawing he’s been making. Played linearly, the marks make a line drawing that moves and morphs, the previously disjointed marks now a visual echo of Barnes’ movement.

“And with her long unbroken beach and owls softly cooing this might be the softest hunt ever” –Vanessa DeWolf, Video: Sage Mailman

Hesitant and fluid, occasionally staccato, intermittently delicate, Barnes creates improvised repetitions that flow like the blood, sometimes thick and viscous, sometimes thin and light. This chain reaction of artistic media is using landscape is a metaphor for the body: the liver is a meridian, the kidneys are a water element controlling fear and willpower.

Glimpse the process of this residency taking place Saturdays–Mondays in the PACCAR Pavilion. Weekends, Barnes and DeWolf will take pulse readings from 2–3 people and Mondays, the entire artist crew will take 2 pulse readings. Attend the Winter Weekend Art Encounters to see the ongoing outcomes of these pulse readings. The Friday, January 27 Art Encounter, Bridging Pulse, will be informed by the prior public pulse readings and feature the core group of artists. February’s Friday 24 Art Encounter will not include animation but will feature 10 dancers interacting with each other and responding to multiple pulse reading stations. For the third and final Art Encounter on March 31 will present Vanessa DeWolf’s writing as a lead character in a more intimate and contained performance.

“I’m available as a marble ten the pages open to where I will find it again” –Vanessa DeWolf, Video: Bruce Clayton Tom

At each Art Encounter you’ll notice a pulsing light directed outwards from the PACCAR Pavilion. This is the work of Amiya Brown, yet another collaborator in Page Barnes’ menagerie. Let this light, programmed to pulse at the pace of various Northwest lighthouses guide you safely towards these subtle and beautiful encounters.