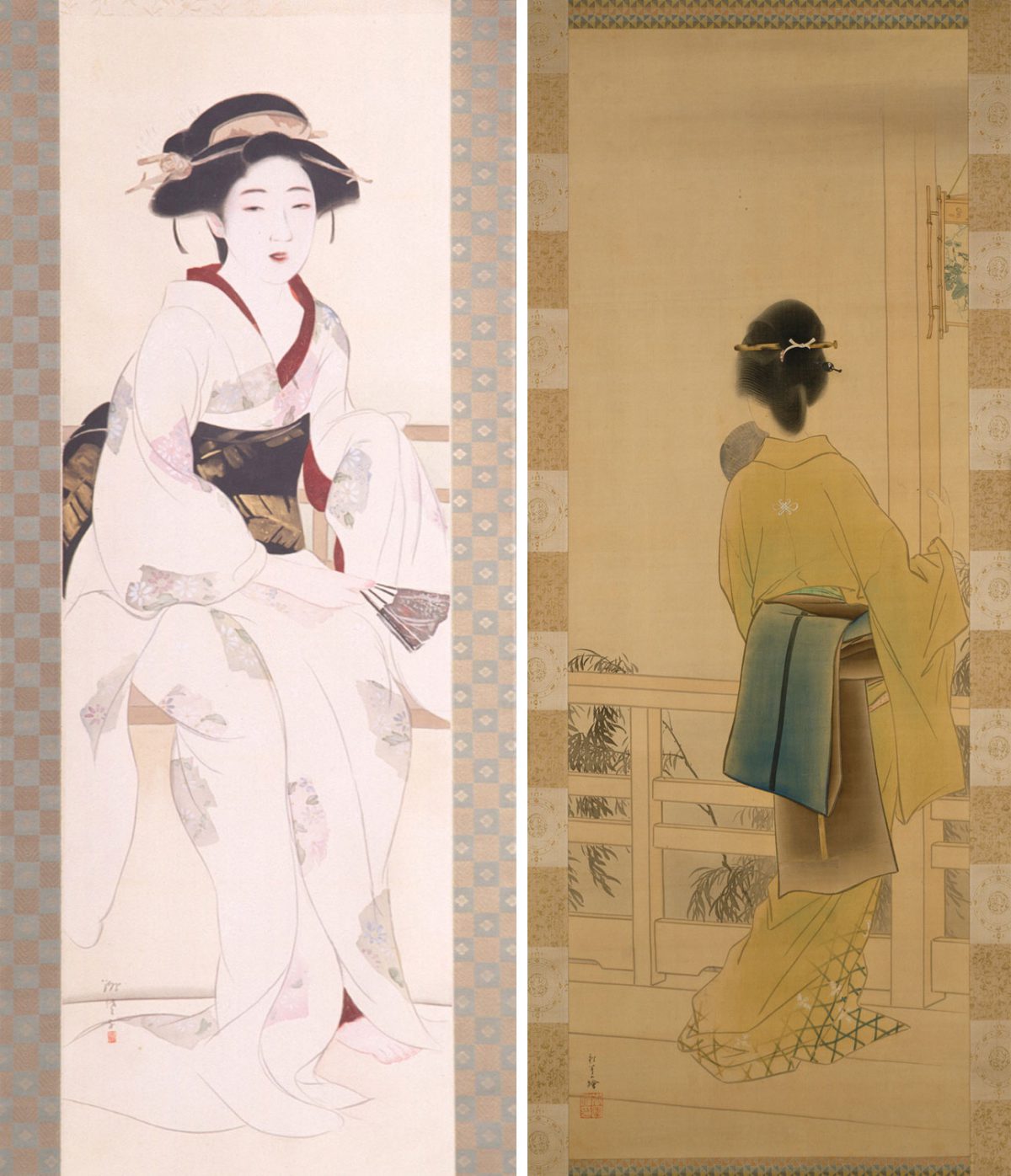 As another breathtaking Seattle summer quickly approaches, our craving for freedom, both from the chilly Pacific Northwest damp and from the seemingly endless shadow of the pandemic, grows ever more desperate.

In this state, we can easily empathize with the two women portrayed in Uemura Shoen’s Summer Evening and Kajiwara Hisako’s Woman in Summer Attire, both painted in the first quarter of the twentieth century. Each of the two works might at first glance be identified within the tradition of bijinga (美人画), a term used to describe idealized images of beautiful women which emerged in the mid-Edo period (around 1603-1868). However, though Shoen and Hisako were both trained in the bijinga genre in Kyoto, they were motivated to resist its conventions by the desire to represent thoroughly modern women. Their subjects have complexity and agency; they demand more than what social convention has prescribed for them, and long for liberation from the domestic interior that confines them.

In Summer Evening, Uemura Shoen (1875-1949) depicts an elegantly dressed young woman whose back is turned to the viewer as she looks out from a covered balcony. In her left hand she holds a paper fan, and the loosely tied, gold-accented sash, subtle bird motif in the kimono’s patterning, and basket weave on the hem suggest the refinement of a geisha. The diagonal lines in the drapery of her kimono indicate motion, and we sense that though she may be paused in observation, the cessation of movement will be brief. We have no way of knowing whether she is awaiting a guest, enjoying the moonrise, or looking longingly after one who has just departed. This ambiguity leaves us wondering, and enhances the appeal of the image.

Kajiwara Hisako (1896-1988) was well known for her unpretentious paintings of working class or professional women, and this work is considered one of the most evocative examples of her distinctive approach. In Woman in Summer Attire, the sitter actively meets the viewer’s eyes rather than passively looking away. She pierces us with a stare that at once reflects a sense of boredom and defiance; her ambiguous expression leaves this work open to a variety of interpretations.

Shoen and Hisako blended traditional media and format with modern themes in their artistic practice at a time when Japan was undergoing rapid industrialization and globalization in response to invasive influence from the West. These and other works by Shoen and Hisako stand out amongst those of their contemporaries because they not only resist the male gaze, but are in fact crafted in the female gaze. There is an overwhelming feeling of anticipation, even impatience, in the women they portray.