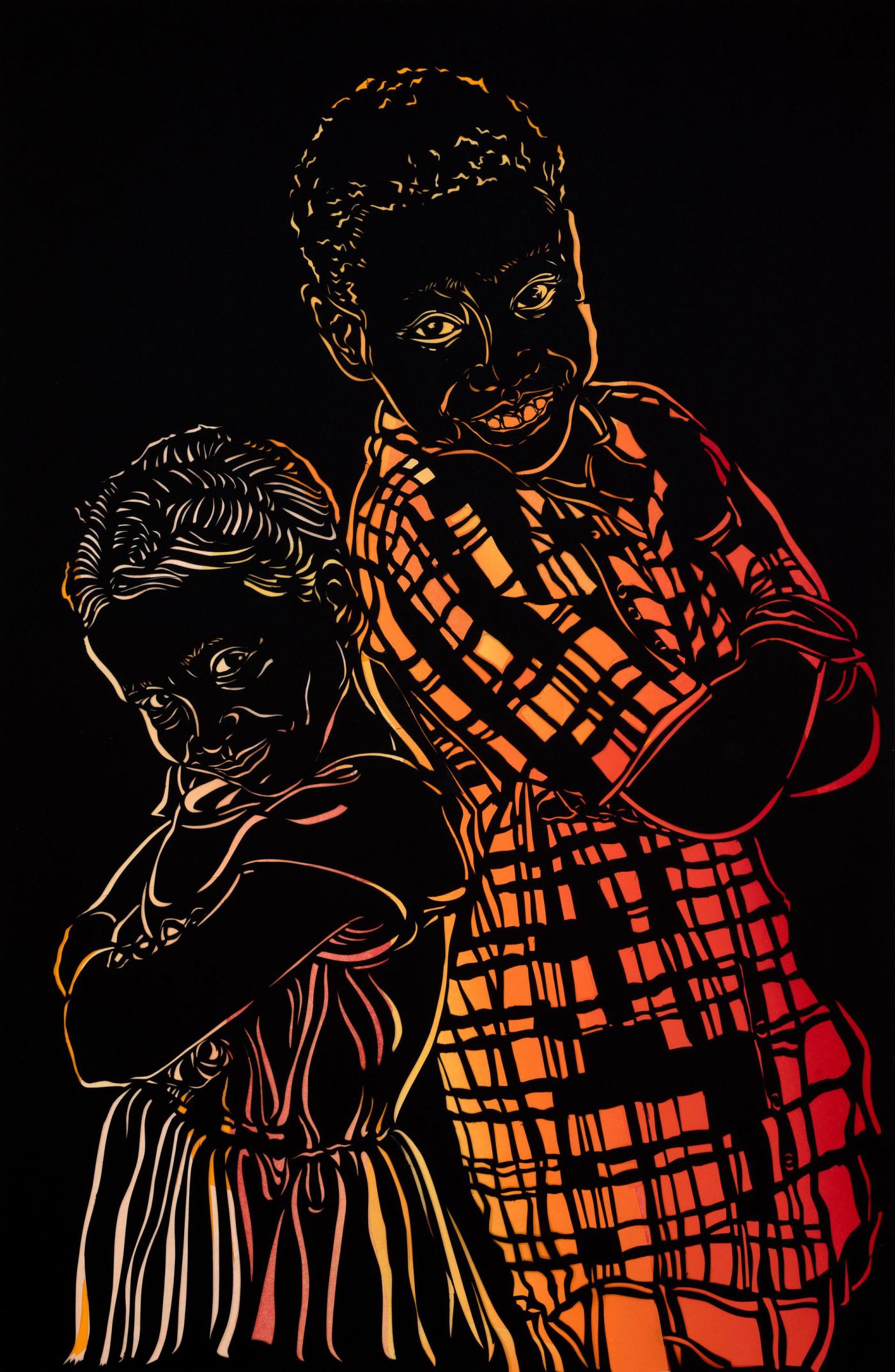 Barbara Earl Thomas: The Geography of Innocence, which will be on view for a year at SAM, centers Black youth in a series of all-new artworks at once delicate and resilient. This Seattle-based artist uses cut-paper and glass portraits and transforms an entire gallery into a luminaria. A place for reflection, the works cut to the core of the fundamental values we assign to light and dark. The disarming expressions of children in Thomas’ portraits ask us to consider how we see each other and how we internalize and project innocence and guilt. Drawn from a community of family and friends, The Geography of Innocence celebrates young lives and their futures in full consciousness of the pervasive violence against Black children. SAM’s Jon and Mary Shirley Curator of Modern and Contemporary Art, Catharina Manchanda interview this important artist in anticipation of the upcoming exhibition. Tickets to visit the galleries will be available starting November 1!

Catharina Manchanda: Biblical narratives form the backdrop of many of your works, and you bring the symbolism of light and shadow to bear on the political situation in this country. What narratives do you explore in The Geography of Innocence?

Barbara Earl Thomas: It’s the two-way mirror through which I see the world. It’s narrated to me in my grandmother Phoebe’s voice with whom I often spent the weekends and summers; where at each exit to the bathroom, kitchen, or bedroom, she’d say, “I’ll be right back, God willing.” This set a tone for the temporality of each moment of this life as she moved through her day. Her God ruled every moment and was the reason for everything good. The devil, his dark wily opposite, was the root of all evil. She loved and admonished us in those terms. Everything was literal. When I misbehaved, the devil had gotten into me. This meant I was not quite responsible for my misdeeds, but in some moment of inattention, I’d let down my guard, and admitted the demon who caused me to climb that tree and fall out, or say some bad words to my cousins who were also full of devils. She reminded me that hell was paved with hot stones, filled with fire, and it came out of your eyes, nose, ears, and mouth. I saw this, clear as day. My grandfather admonished her because he knew by nightfall, I’d be so crazed with this idea of the devil, that instead of sleeping on the couch, I might have to sleep with them. These were some of my first stories heard, sung, and repeated. They formed the backdrop of beauty and mystery of my world.

As a young person I was drawn to the oratorical language of the sermon and its talk of miracles and prophecy—none of which I’d seen. It was the music I listened to, the silences from the adults as I entered the room, and the ladies who prayed over me when I was sick. The ritual and the shape of sanctuary no matter the denomination—Catholic, Jewish, Baptist, Lutheran and Evangelical—was all the same to me. I’d wander into Holy Names Cathedral just off Union Street, or accompany a friend to one of the many Pentecostal churches often set up in temporary store fronts, fleeting in their residence. During these services accompanied by full bands, there were people who sang as each member became possessed by a holy spirit. There were the Jewish people walking to synagogue on Saturday. All these places in my small world were little fires of community where deep emotion and imagination converged. There were stories, food, songs, candles, holy water, and scenes of strange happenings from some mythical past about some next world.

I was intrigued by the language and cultural references around how we describe victims when we think and speak about the violence so prevalent in our country. There is something of heaven and hell to this: violence spirals down from police shootings of young Black men, to nightclub massacres, to random sniper killings of the oldest and then to the youngest among us, our children. I thought, this is where it will stop, with the children. Certainly every adult will draw the line when it comes to the wholesale slaughter of children. Sadly, that was not the case, but what emerged for me from the myriad mass shootings—with Sandy Hook most notably—was the language around sympathy, guilt, and innocence. In thinking about why we as adults couldn’t put children first, I was drawn to studies that demonstrated how we, as a culture, see our children. Here young Black children are seen as less innocent and, therefore, less worthy of public grief than white children.

My ideas for this exhibit surfaced after several readings of Junichiro Tanizaki’s In Praise of Shadows and a subsequent re-reading of a mid-1980’s James Hillman essay, Notes on White Supremacy. Prescient in its content, Hillman explores the deep-seated world of mythology around the concepts of light and dark, black and white. As I’d read the essay so long ago, I’d forgotten Hillman’s reference to Tanizaki’s book. It was a happy connection. Both the book and essay deal with how deeply imprinted our associations with language and its usage of the words and concepts are associated with darkness and light. From guilt to innocence they hold a deep well of our associated fears of the unclean and besmirched. Conversely, we associate light and white with all that is pure, clear, clean, and, therefore, innocent and unblemished.

Light and dark. Light and shadow. What is seen and unseen. What is clear and what is mystery—these kinds of experiences are part of my story in addition to my formal education. This is the base that provided the vocabulary and shaped my narrative of the world. As a Black person, I can’t help but see myself in the landscape and imagine how others might experience me based on how I appear to them. I search myself to see how I react to and employ my thoughts and opinions, because aside from being Black I’m also human and subject to the world’s influences.

In this new body of work, I use multiple images of Black children: bold, frontal, and almost life size, so that their faces engage the viewer. In my cuts, I explore youth and its innocence imprinted in and on the subjects’ expressions. I purposefully insist on this particular view and stance because it’s not the one most given to us often in the media or popular culture. The backgrounds may hold contrasting stories that compete with the figures and their stance—the push and pull of the opposites; the yin and yang.

CM: Elsewhere you noted: “I create stories from the apocalypse we live in now and narrate how life goes on in the midst of chaos.” This statement is acutely felt right now—can you talk about it in relationship to the work that will be on view at SAM?

BET: As a child of the ‘60s and ‘70s, now as then, there was much ado and action around issues of inequity. The utopian movements that sprang up were numerous. Like formal religion, these communities and/or cults were created as foils to the many disasters life holds. We are afraid and terrified; there is nothing new in that. We construct magic circles and ritual movements to distract and protect ourselves from floods, storms, fires, famines, diseases and yes, now plagues. It is my observations and my experiences that interest me, so like a good witness I note, record, and echo back to my viewer my literal experience of the world through visual stories.

CM: You call yourself “artist, writer, thinker.” We also know that you are an engaged reader. How does your reading and writing practice inform your visual work?

BET: Reading is life. As an active reader I’ve always used literature and all of my reading to inform my world.  I read and write to get at truth and to clarify my own thought process. It’s easy for me to talk about my thoughts and correct or rephrase as I go. There is something about being in a room and engaging in a conversation that can make even confused thought processes sound plausible. But when I write I am forced to create clear sentences and connect thoughts and see if they hold water. When I read, I’m looking for the rigor and willingness in the author to think things all the way through. Writers like James Baldwin, August Wilson, and John Edgar Widman are American writers who do that for me. Poets like Pablo Neruda and Rilke capture truth in a nonlinear image condensed. Most recently, I’ve been reading Colin Thurbron’s travel writing, Pico Iyer, and rereading Robert D. Kaplan. I love good travel writing as it is a way to see the world through others’ eyes and be in other parts of this world without traveling. What all these authors share is clear thinking and hard truth telling, which is something I demand of myself in my own work.

CM: You are making a lot of new work for the exhibition, which include different kinds of processes. Would you tell us about the use of the negative space in your paper cuts (you say you draw with the knife!) compared to the wall hangings?

CM: You are pairing your cut paper works with illuminated glass panels for the installation at SAM, what prompted you to pair these in the two adjacent galleries?

BET: I think of this exhibition as one installation made up of several parts. Each separate element has its role in the installation of the paper-cut portraits. Most of the figures are inspired by children of friends and neighbors, some are random portraits I’ve found. All are chosen because there is a way for me to show the part that I think is missing in many of our depictions of the innocence that lives in and marks the dark face of a child. I’m creating a space that holds the viewer in light and shadow to demonstrate something about illusion and how our imagination creates the monsters in the shadows even when there is nothing there. In this case I’m cutting the beautiful from the darkness and placing viewers in the shadows to make them a part of the world they observe. The portraits are cast as precious objects, surrounded by what feels like sacred objects—my candelabras.  The hand-cut wallpaper is designed to create fountains of movement as the viewer is invited to the suspended centerpiece, Bodies in the Matrix.