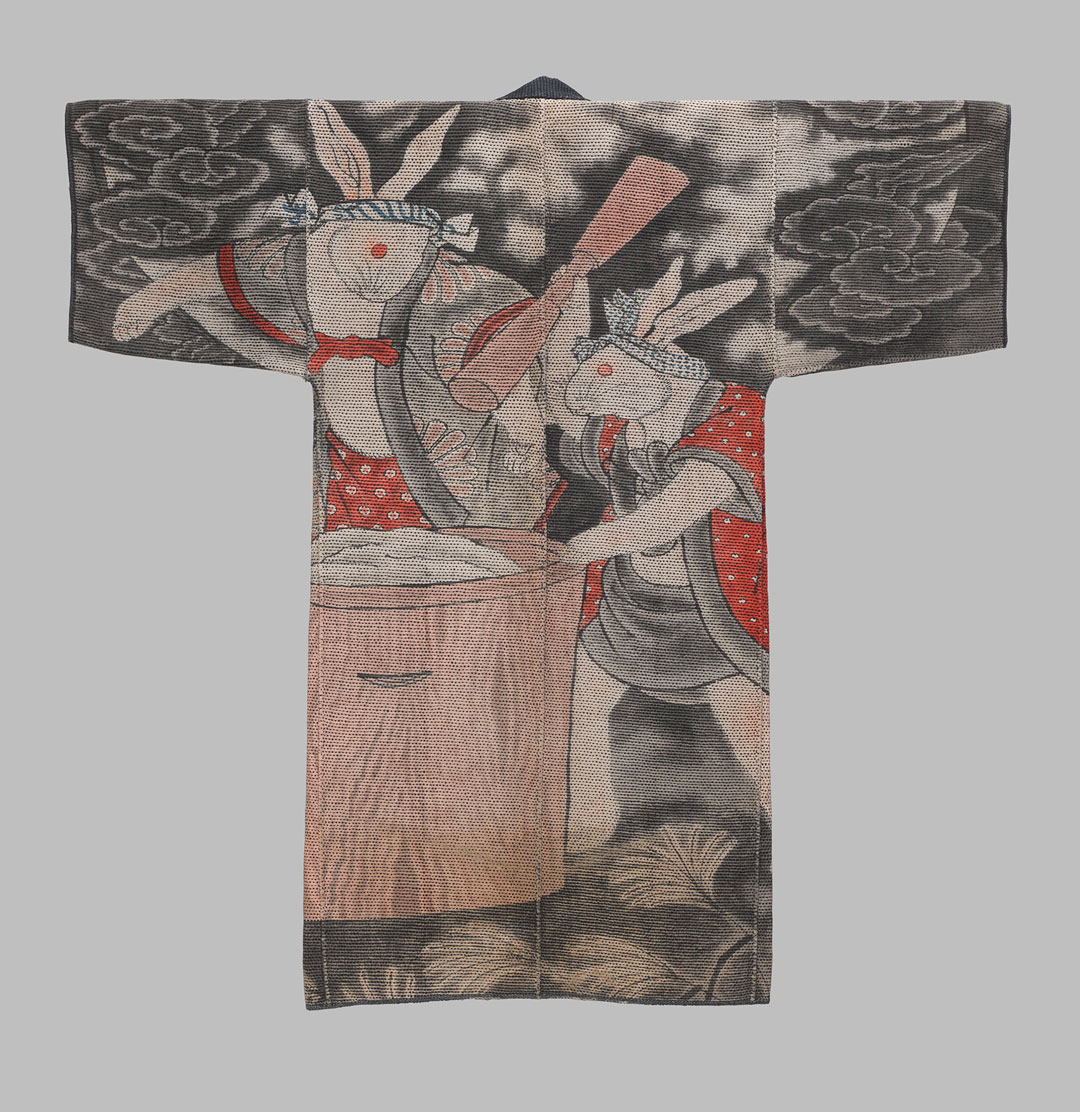 April showers may bring May flowers, but the passing of the clouds bring clear nights to see the bright face of the moon. Moon gazing isn’t an easy task here in the Pacific Northwest, especially with all the rainstorms and grey days; however, in East Asian countries, Moon Viewing is a popular mid-autumn festival for celebrating the harvest and contemplating the beauty of the night sky. In Japan, this is called Tsukimi, and is held on the 15th day to the 18th day of the eighth lunar month––so, sometime in September or October, depending on year. In the past it was time to write waka, a form of Japanese poetry, which originated within the aristocracy. Today, Tsukimi is celebrated all over Japan with displays of pampas grass and white balls of mochi (sweet rice cakes).

At the Asian Art Museum, we have our own example of Tsukimi revelry in the form of a 19th century hikeshi banten, or a commoner’s fireman coat. Made of tough cotton to impede burning debris, this coat has a surprisingly playful depiction of rabbits on their hind-legs, pounding at a vessel of mochi. Made of glutinous rice, mochi needs to be pounded to make the smooth, stretchy texture for which it is known.

So why rabbits? At first glance it would seem odd to connect these bunnies to mochi creation, or Tsukimi at all. However, in terms of mythology, rabbits have a lot to do with both. In the West, we have a fairy tale about the man in the moon, so created by how the moon’s dark craters seem to mimic the features of a face. In many Eastern folktales, however, it is not a human face, but a rabbit. Specifically, it is a rabbit with a mortar and pestle. In China, this is because the rabbit is a companion to the moon goddess, and pounds her medicine of immortality. In Japan and Korea, this rabbit pounds mochi, and has an entirely different reason for being engraved on the moon. In the Konjaku Monogatarishu, a collection of tales from the Heian Period, the story is told like this:

A long time ago, the Man of the Moon came down to Earth in secret in the guise of an old man. There, he came across three friends: monkey, fox, and rabbit, who had all taken a vow of charity. To them, he begged for food.

The monkey, being nimble, brought him fruit. The fox, being clever, brought him fish. The rabbit, only able to gather grass, had nothing to offer. So he asked the old man to light a fire and jumped into it, offering his own body as a meal.

The old man changed quickly back to the Man of the Moon and pulled the rabbit from the fire. He was deeply touched by such sacrifice and said “Rabbit, you are a kind creature, but do not give yourself up for me. As you were kindest of all, you may come and live with me upon the moon.” The rabbit agreed, and was carried to his new home. He is still there to this day. If you look up at the moon, you can see his figure upon it.

Between the flame that the rabbit tossed himself into, and his associations to the moon and food, it seems a little clearer why there would be the image of a mochi-pounding rabbit on a fireman’s coat. The rabbit was miraculously pulled from the flame and provided honor for his sacrifice––the perfect emblem of protection for a fireman.

Even with social distancing, we can still look up and see the rabbit, pounding away at mochi on the surface of the moon. It makes you wonder if he is an essential worker, too, and whether they have such worries in the night sky. When the Asian Art Museum reopens, you can see this rabbit hikeshi-banten on view in the galleries as a fine example of what would have once defined a fireman.