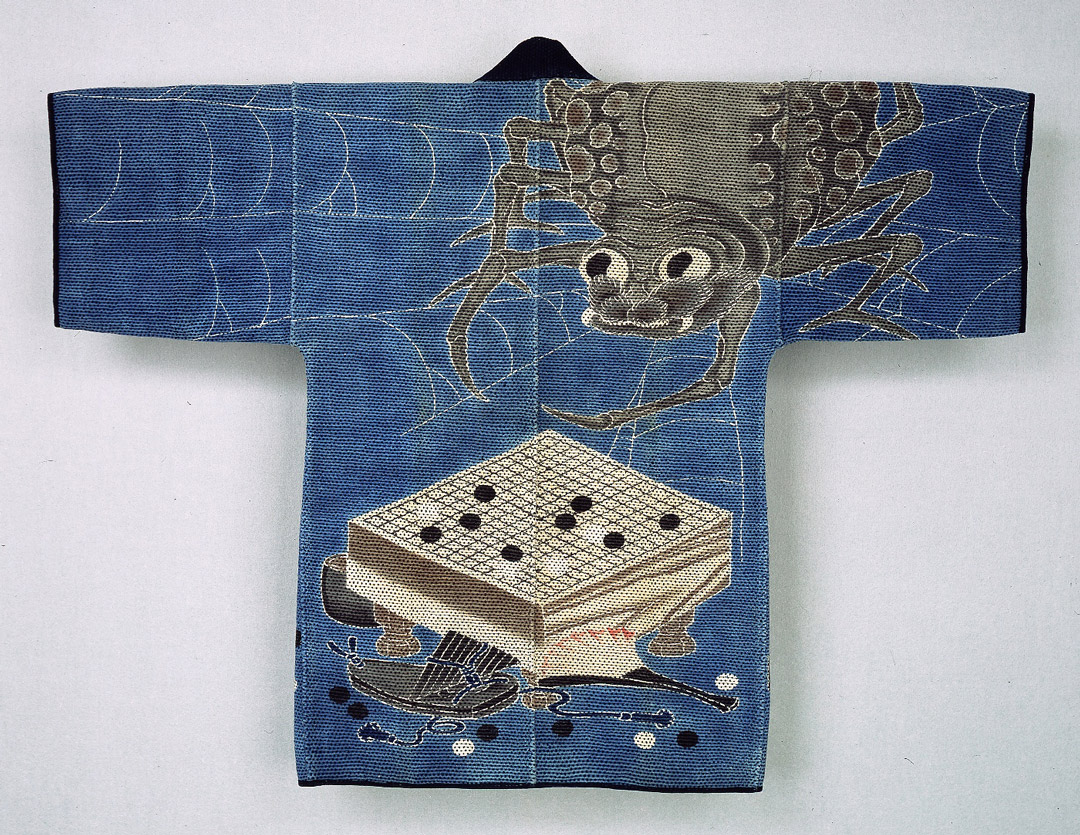 As Halloween approaches and our thoughts turn to the weird and witchy, we wanted to highlight an early-nineteenth-century firefighter’s coat, called hikeshibanten, since it features a spooky spider. Made in the Edo period in Japan, these firefighter’s coats were reversible, and this design is actually on the interior of the jacket, only visible when the jacket has been turned inside out. A large spider—with an endearing face—looms over the shoulder of the jacket, where it hovers menacingly over an abandoned go board (Pacific Northwesterners may have unnerving flashbacks to the giant house spiders that descend on Seattle in the autumn). The range of tonalities centers on indigo, white, black, and greyish-brown, with red accents on the fan; this color palette visually unites the work, creating parallels between the spider’s eyes and the go pieces.

The method of dyeing used, tsutsugaki, is a type of resist dyeing. The design was drawn on the cotton using rice paste, and these initial lines are visible now as the lightest areas of the design. The spider and the go board were dyed their respective colors, and covered with more rice paste to block any other dye from entering the area. Then the fabric was dipped into indigo multiple times, dried, soaked in hot water again, and the rice paste was scraped off to reveal the layering of colors; this whole process could take 20 days.[1]

But why is this spider on a firefighting jacket at all? The jacket tells a story from the life of Minamoto no Yorimitsu (948–1021), a warrior-hero. The story is as follows: Yorimitsu was sick, and was resting in bed. He was visited by a priest—but the priest was actually a giant spider (tsuchigumo) in disguise! Yorimitsu, being very clever, sees through the disguise, and attacks the spider with his sword, wounding him. Yorimitsu’s four attendants, called the Four Heavenly Kings, were playing a game of go while guarding him, and leapt up to track the spider back to his den.[2]

This narrative was popular in theatrical productions, and there was a song in Noh theatre specifically about tsuchigumo, the intimidating earth spider. The story appears frequently in woodblock prints in the nineteenth century as well. The jacket shows the moment when the go game was abandoned, with tsuchigumo retreating back to his web. So great was the hurried effort to find the spider that the attendants left behind their personal effects, scattering go pieces in their haste.

The human figures in this story are removed from the jacket’s design and the firefighter symbolically takes their place. The firefighter becomes imbued with Minamoto no Yorimitsu’s special powers as a warrior-hero, and the design works as a talisman to protect the firefighter from harm. Firefighting was an especially important occupation in Edo, where most of the buildings were made of wood. The job was both dangerous and glamorous, valorized as a crucial masculine exemplar in Edo.[3] So while these jackets were for a real, practical, dangerous job, they are also imbued with a sort of glamour, which helps explain why such an effort was taken to dye the jackets with symbolic designs. After battling a fire, the coats would be worn reversed to make the designs visible, a stunning effect that visually linked the clothing to success and survival.[4]

Listed in our records as a “commoner’s firefighting jacket,” the ordinariness of the hikeshibanten is one of the things I find so compelling about it. These jackets were objects of both use and beauty, and of hidden, personal importance to the wearer. There are several Edo firefighter’s coats in SAM’s collection, and this one is my favorite. Textiles often have an intimate history with their owners, and this firefighter’s coat makes me think about the capacity for cloth to protect us, define us, and celebrate us. This firefighter, whose name is now lost to time, found solace in Yorimoto’s defeat of tsuchigumo, literally clothing himself in a hero narrative.

[1] Richard Mellott, “Katazome, Tsutsugaki, and Yuzenzome,” in Beyond the Tanabata Bridge: Traditional Japanese Textiles, Seattle: Thames and Hudson and the Seattle Art Museum, 1993, 51-57, 55.

[2] For more on this narrative and related woodblock prints, see Kuniyoshi: From the Arthur R. Miller Collection, edited by Timothy Clark, London: Royal Academy of Arts, 2009, 268.

[3] Michiyo Morioka, “Sashiko, Kogin, and Hishizashi,” in Beyond the Tanabata Bridge: Traditional Japanese Textiles, Seattle: Thames and Hudson and the Seattle Art Museum, 1993, 107-129, 121.