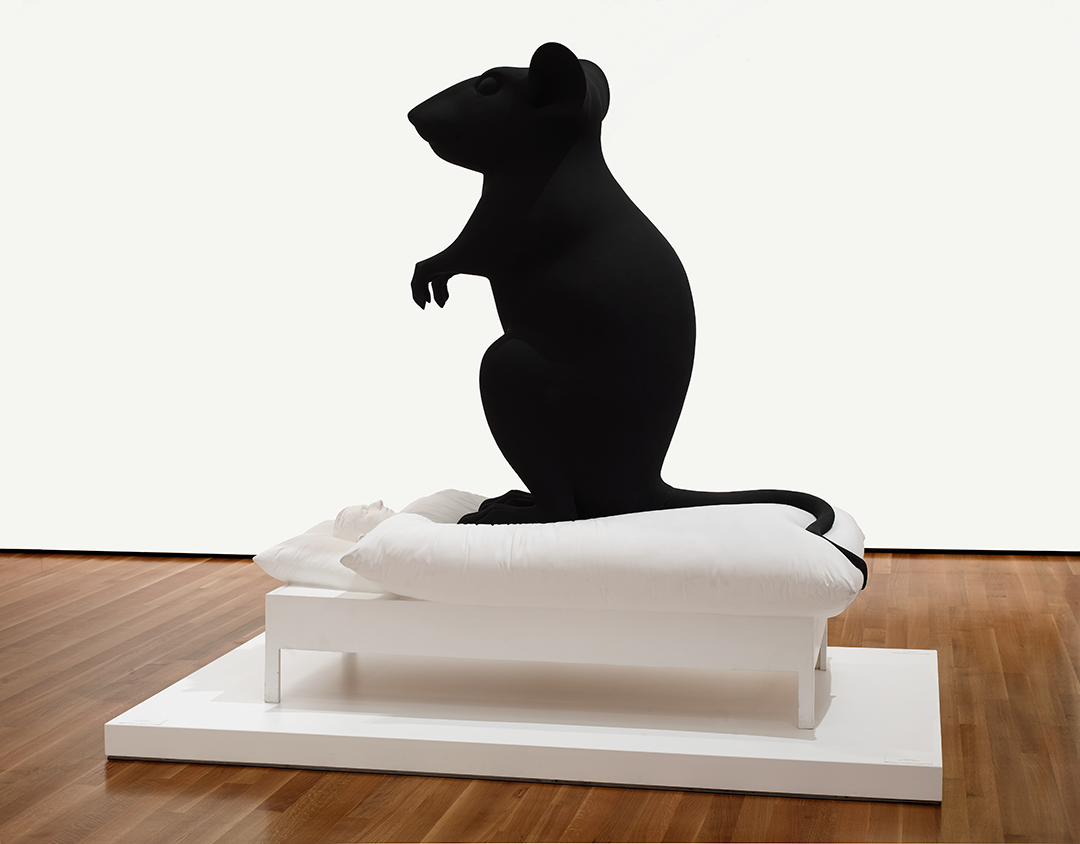 As you’re pondering your Halloween costume this year and watching politicians locked in a game of cat and mouse, you may want to stop by SAM for a bit of inspiration. Installed in Big Picture: Art after 1945 is Katharina Fritsch’s Mann und Maus (Man and Mouse). An enormous mouse towers like a dark specter over a sleeping figure of a man, who is as white as his downy bed. The man seems undisturbed while the animal appears alert and ready to pounce. A bizarre mirage? A nightmarish vision? Or, a secret story of affection? It all depends on your point of view.

When the German artist Katharina Fritsch made this sculpture in 1991/1992, she was working in the context of the recent fall of the Berlin Wall (1989) and the beginning of a rejoinder of long-divided East and West Germany. Following World War II, allied forces divided the country—the East fell under Russian control, the western portions under that of the United States, Britain, and France. The division into East and West became the fault line of the so-called Iron Curtain. Given the extreme ideological differences on either side of that border, reunification was an unexpected and momentous event, with enormous new social and economic challenges. Fritsch was born and raised in West Germany and grew up during the post-war years. Artistically, Fritsch came into her own in the 1980s, part of an artistic and cultural cohort skeptical and ironic vis-à-vis government and symbols of power. Characteristic of Fritsch is the manipulation of scale that renders the most ordinary domestic animals and objects uncanny or strangely surreal. Mann und Maus makes a nice bookend to another celebrated work by the artist called the Rat King—a circle of sixteen rats, their tails tied in a knot and facing outward in what looks like a defensive military formation. The fact that each rat is 12-feet tall, however, turns the tables and puts us, as viewers circling that formation, in a rather uncomfortable defensive position. Scale remains a key ingredient in the theatrical staging of power relationships, a timeless topic that the artist leaves up to the viewer to interpret. For English-speaking audiences, the title of our work, Mann und Maus, will bring to mind John Steinbeck’s 1937 novel Of Mice and Men, a story worth rereading in view of a global surge in migration and displacement.