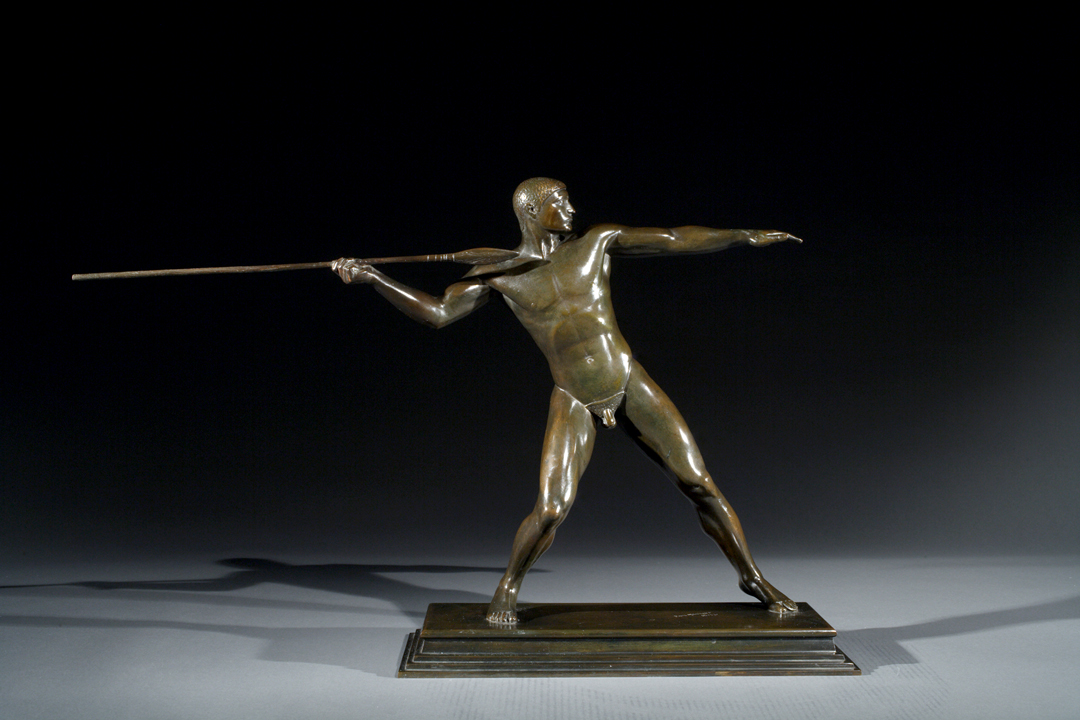 In his bronze sculpture of a Spear Thrower, Paul Manship depicts an athlete in motion. The sculpture has balance and equilibrium as the figure reaches back and prepares to hurl his spear forward. He’s pictured at the moment just before the energy is transferred, with his full weight on the back leg, where the muscles bunch and bulge with exertion. If he’s hurting from the effort, his face doesn’t show it; his look is one of resolve and otherworldly gracefulness. His spear creates a strong horizontal line that is carried across the sculpture by the figure’s fully extended left arm. His features are ripped and generalized; he is an ideal form and not an individual one. With this sculpture Manship celebrated ideas like human strength and achievement, and the beauty of the athlete’s body.

Important links between works of visual art exist everywhere, and part of what SAM and other art museums can do for us is point out this vast web of interconnectedness. Its intricacy and complexity mean that there is always more to discover. For instance, Paul Manship, an American born in Minnesota, was inspired by Indian art, as well as archaic Greek art and the Italian Renaissance that renewed appreciation for classical Greek ideas and developed them further.

In the form of Spear Thrower Manship made a direct reference to this Bronze statue of Zeus or Poseidon at the National Archaeological Museum in Athens. Done in what’s called the “severe style” around 460 BCE, it is a true landmark in the history of art, and remains one of the best-known examples of Early Classical Greek sculpture. It was to this school of art-making, and to this particular work, that Manship looked when he cast the Spear Thrower in 1921.

Interesting comparisons, if less apparent ones, exist even in SAM’s own collection. Have a look at our Black-Figure Amphora displayed on the fourth floor, amid other works from the ancient Mediterranean. Revelers stride across the scene in dynamic poses that have them twisting and contorting their bodies in displays of balance and gracefulness. Each figure stands on a single foot, supported by a powerful, muscular leg. Clean, sinuous lines mark the contours of the figures. All these traits surface visibly in Manship’s work of 2,300 years later. We’d be doing Manship a disservice, though, if we understood him as only looking backwards. In SAM’s Spear Thrower, as in Manship’s famous Prometheus fountain at Rockefeller Center, he innovated a combination of classical, idealized bodies and a distinctly Modern, streamlined aesthetic that secured him a prominent place in the web of art history.