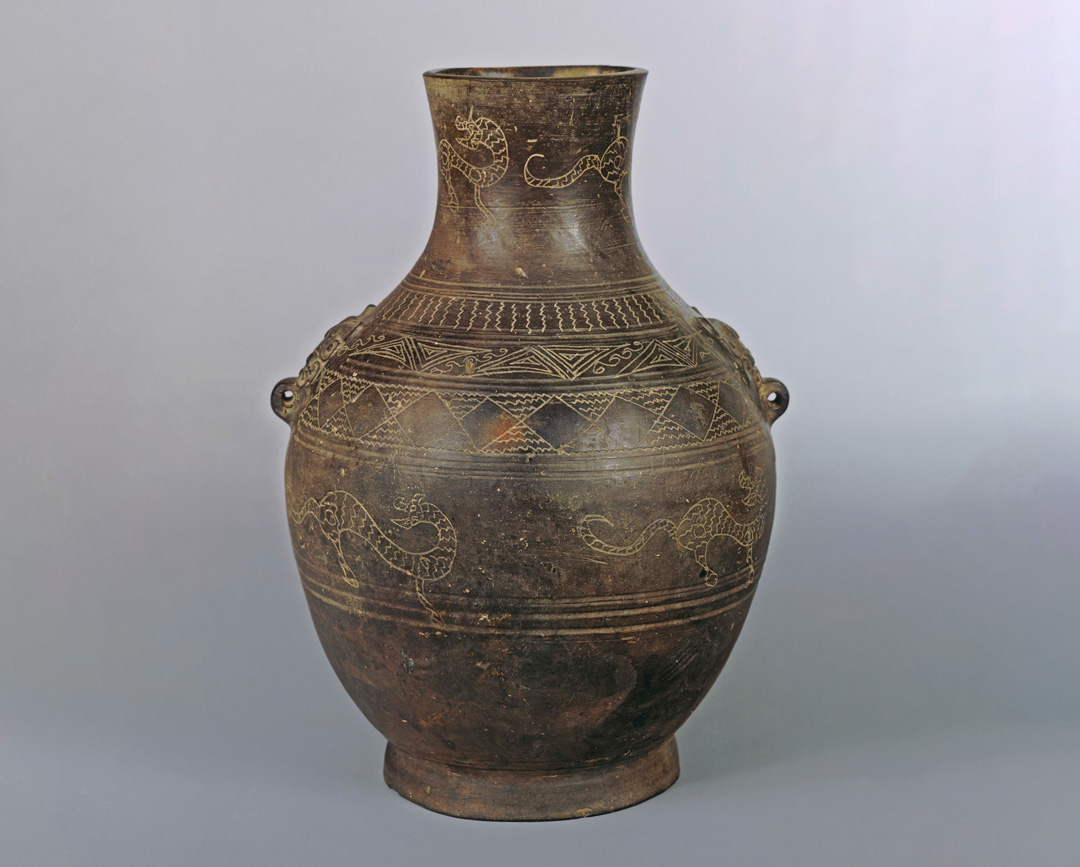 SAM’s remarkable Black pottery vase in shape of hu is among the museum’s earliest acquisitions. The vase’s object number, 33.6, communicates that it was the sixth piece formally accessioned in the museum’s inaugural year of 1933, and of the objects added to the collection that year, the vase is the first to survive deaccessioning; sadly, 33.1 through 33.5 are no longer with us.

Dr. Fuller purchased this Warring States period ceramic jar for $150 from a New York dealer named Roland Moore. Roland, the son of a Chinese dealer named Rufus, continued in the family business, selling mainly snuff bottles and ceramics.1  The vase is just one of 259 items that Fuller purchased from Moore, and though not every one of these selections was a home run, Fuller did benefit from the connection, establishing the beginnings of a strong Asian ceramics collection that we enjoy today.

Dr. Fuller, who has been proven over time a very successful collector, was still developing his taste at this early stage. He landed on the Black pottery vase in shape of hu at a moment when he was moving beyond his initial collecting interest—snuff bottles—and looking to jades and ceramics. While expanding the art forms he considered for acquisition, he simultaneously became interested in adding Chinese works from various dynasties to increase the breadth of the collection. This vase, with its intriguing decorative designs, and its 3rd-century B.C. date, added new dimensions to SAM’s Chinese collection.

For me, the vase is a tour de force in imitation. Though ceramic, it imitates bronze by its burnished shade of brown-black, echoing patina. The taotie mask that adorns two sides of the vase is a typically bronze decorative motif, but here it is, carefully worked onto the body of an earthenware piece. At the historical moment when the vase was made, ceramic offered an economic alternative to costlier bronze; hence we see a ceramic dressed up as a bronze.

Fascinating geometric and animal designs adorn the vase. As our eye scans it, we notice that horizontal ridges attempt to organize the decoration into separate registers. On the neck and on the largest register of the body, scaly beasts look backward toward curling tails. Jagged vertical lines mark the first register below the neck; the second register features nesting triangles interspersed with sawtooth serrations; in another register beneath that, irregular diamonds run across the vase, linked together by script-like horizontal lines.

Throughout the vase, an interesting dialogue occurs between the potter and the decorator—maybe a conflict between a regimented and more freeform approach to artistic decoration. The indented bands that separate the vase into its various registers would have been formed when the vase was initially thrown, probably on a potter’s wheel; the incised decoration was added later. On the middle of the vase, notice how the legs and feet of the dragon creatures transgress the boundaries of their register, creeping over the horizontal bands. I liken this decoration to coloring outside the lines. It’s as if the dragon, mysterious and powerful, refused to be contained by the space allotted to it. Elsewhere, too, we see incised design overlapping the structuring horizontal bands and playfully interacting with the form of the vase, creating a final impression of an artwork that is, itself, a conversation.