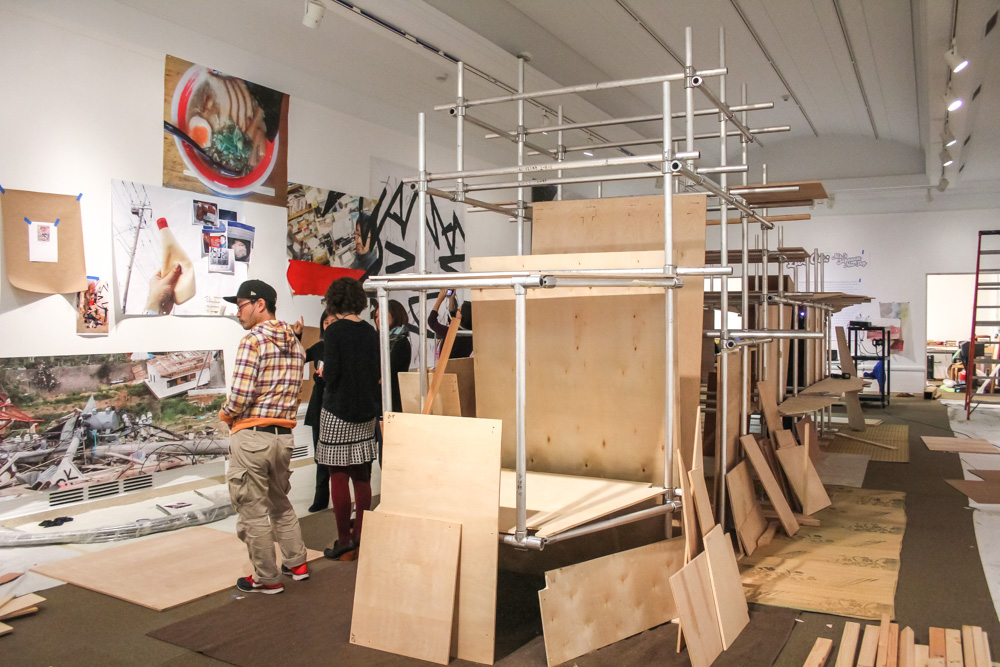 When we arrive at the Asian Art Museum, the Tateuchi Galleries are filled with cardboard boxes. Each room has a low tower built up in the middle, away from the walls. You can see flashes of a panda sticker on many of them, the logo of a moving company. Some of Mr.’s paintings are already hung, and a few are leaning against the walls. In a couple of places, an 8.5×11 piece of paper with a picture of a painting is taped to the wall with masking tape, giving us a clue of what will be going there. The paintings are huge—much larger than we would have guessed—the size of entire gallery walls. We watch as four art preparators carefully lift and place one panel of three, sliding it along a rail toward the other two until you can just barely discern the seam.

Mr. is sitting at a folding table, working on a laptop. He’s surrounded by printouts of his paintings, plans that show how to build the installation in front of him, and photographs he’s taken. He wears a striped hoodie and glasses and jeans, and he seems perfectly happy to take a break and talk about what he’s working on. He doesn’t speak much English, and I speak no Japanese, so we chat with the aid of SAM’s Curator of Japanese and Korean Art, Xiaojin Wu, and Mr.’s assistant, Kozue, who’s also based here in Seattle. The necessary triplicate of the interview means we move through the galleries slowly, standing amidst the cardboard boxes and the sounds of drills nearby. Everyone is so patient it’s hard to tell how much time is passing. The installation he’s stationed in front of is the centerpiece of the exhibition, a tribute to the March 11, 2011 Tōhoku tsunami and ensuing earthquake. Most recently, it was shown at the Lehmann Maupin Gallery in New York. When it’s finished, it’s about the size of a train car, made up of what Mr. calls “stuff.”

Right now, it’s just a skeleton made from pipes and plywood. It looks something like an erector set, and Mr. refers to it affectionately as the “caterpillar.” The art preparators working in this gallery say that it’s like putting together a puzzle. They have sketches to follow, but they’re not exact, and they’re figuring it out with Mr. as they go. It will be a massive structure, made up of hundreds of everyday objects of Japanese life that Mr. spent three months collecting. Some crates were shipped from New York City, where they were stored after the Lehmann Maupin show. Some crates were shipped from Japan. Mr.’s translator points out a box of curry, emphasizing that all of these are real things used every day in Japan. I ask if the installation changes every time he constructs it, and he says it’s hard to keep it the same, so by nature it varies. Mr. is creating new paintings with which to surround the installation. And this is the first time that Mr.’s photographs of the aftermath of the tsunami will be on display. During the tsunami, Mr. was living in Saitama, Japan, just outside of Tokyo. One hundred days after the tsunami hit, Mr. went to the site and took hundreds of photographs. He pulls his laptop off the table to show me some of the pictures and brings it with us as we look at the wall where they’ll be plastered in a collage from bottom to top.

“I went,” Mr. says, which sound a bit like a pronouncement because in the midst of all the Japanese, he says it in English. Which—this one is. He went there. He saw it in person. He witnessed.

A hundred days after the tsunami, he explains, means it was almost summer. There was a factory nearby that had been making canned fish, and it smelled terrible. While Mr. looks through his photos to find what he wants to show me, I ask Xiaojin why she thinks it’s important that Seattle see the artwork.

“I think at the beginning we were attracted to Mr.’s work because of the tsunami installation. The tsunami was such a huge event that impacted so many Japanese people’s lives that you can look around and almost all the Japanese contemporary artists, in some way, have responded to it. But Mr.’s response is quite unique. He uses the daily items he collected. But he also went to the place and documented the aftermath, so I think it’s very meaningful for us to show that. And somehow, even though his main body of works is made up of paintings, some of the works he made even earlier tie into that idea of disaster and how we respond to it. We think it will be very interesting for the Seattle audience to see a different perspective of Japanese Pop art. Even though the paintings look like anime/manga, they are not just about this—even they have more to them, a little bit deeper meanings. You can get a bit deeper, see beyond the surface…beyond those big eyes, those smiles.” Xiaojin laughs suddenly as she references the happy-go-lucky anime faces, like there’s something bubbly just in talking about it.

Mr. draws my attention to his laptop and shows me the photos of collapsed buildings, tipped cars, downed power lines. Everything looks askew, and gray, covered in silt and dust. In some photos, Mr. is wearing a mask. “When you first went to the tsunami site, did you experience it more as an artist, looking to make artwork, or were you just there to see and experience it as a citizen, as a civilian who’d been part of this disaster?” I ask.

Both Xiaojin as she listens to my question in English, and then Mr. as she translates it into Japanese, nod solemnly. Mr. talks for a long time.

“He was saying the tsunami just impacted everybody in Japan, everyone in the entirety of Japan,” Xiaojin starts. “So he never thought, I’ll go in there as an artist. He just wanted to go and see and experience, but after this experience, his thoughts have just changed so much, and the Fukushima nuclear disaster was also, after…it’s still going on.”

Mr. starts speaking again as Xiaojin slow down. She murmurs in agreement as he talks, a thoughtful sound.

“He says there are two types of people that the tsunami had an impact on. One is directly those people who lived there, lost their home, and really, they probably had the worst damage. But the second kind is just like him, who didn’t really directly experience the tsunami but they lost power, or water, or the supermarket didn’t have enough supplies, so they experienced it indirectly. But just on different levels, everybody was involved.” The next week, when I go back to the Asian Art Museum, the installation is nearly complete. Above the screen that blocks gallery access, I can see a mattress, folded into a u shape over the top of the structure. The installation crams so many pieces of life together that it seems impossible it will hold, in the way an over packed suitcase may burst open at any moment. It’s about trauma, but also about the possibilities of what will come next.

The title of the installation? Give Me Your Wings – think different. No wonder Mr. has nicknamed the skeletal structure the caterpillar.

Live On: Mr.’s Japanese Neo-Pop is now on view at the Asian Art Museum.