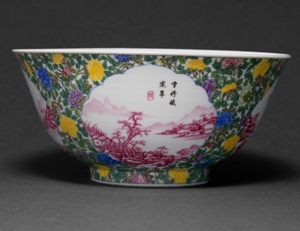 As Seattle oscillates between winter and spring, take a moment to consider four clearly defined seasons—as seen on this Chinese bowl, now on view at the Seattle Asian Art Museum.

Poetic inscriptions caption the four seasons depicted from frame to frame around the bowl. Each season has its own defining text, and its own imagery:

“Green trees abound in village after village,” in summer;

“Withering branches sit silent in the depth of night,” in autumn;

and spring sees “Sprouting willows appear in the scattering mist.”