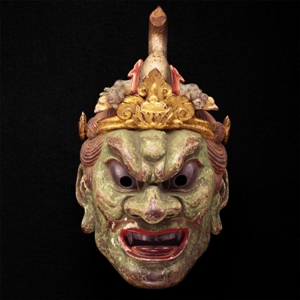 Although this mask now appears to be a piece of static sculpture, when it was in use the effect was the reverse. The mask originally had a back half, and tied together covered the entire head of the wearer. With the wearer’s costume pulled up high on the neck, the head-concealing mask gave the impression that the sculptures within the temple had descended from their pedestals to stride forth amidst the devotees. Masked processions very literally brought religious belief to life in a thrilling way.

Masked dance was introduced to Japan during the Nara Period (710-794 CE) as part of a massive importation of Korean and Chinese political and religious culture. Initially only used in court rituals, by the Kamakura Period (1185-1333), when this mask was made, masked dance had taken on many different forms. The Dragon King was used in Buddhist gyodo performances, processions of masked figures embodying divine being.

Sagara the Dragon King stylistically blends two characters from different schools of masked performance. In Buddhist gyodo, the character Sagara is one of the Eight Great Dragon Kings, part of the retinue of Amida Buddha. In bugaku, a type of popular non-religious masked drama, the same features are shared by the character of a Dragon King, a prince so handsome that he wore a fearsome mask in battle to frighten his enemies, and so that his beauty would not distract his allies. Over time, the two characters came to share the distinctive green skin, ferociously contorted face, bulging eyes, and the dragon rearing back atop his head. Sagara’s role as a religious guardian, here, is emphasized by his golden lotus crown, a symbol of purity in Buddhism. Sagara’s formidable visage gave the faithful confidence in his ability as a protector.