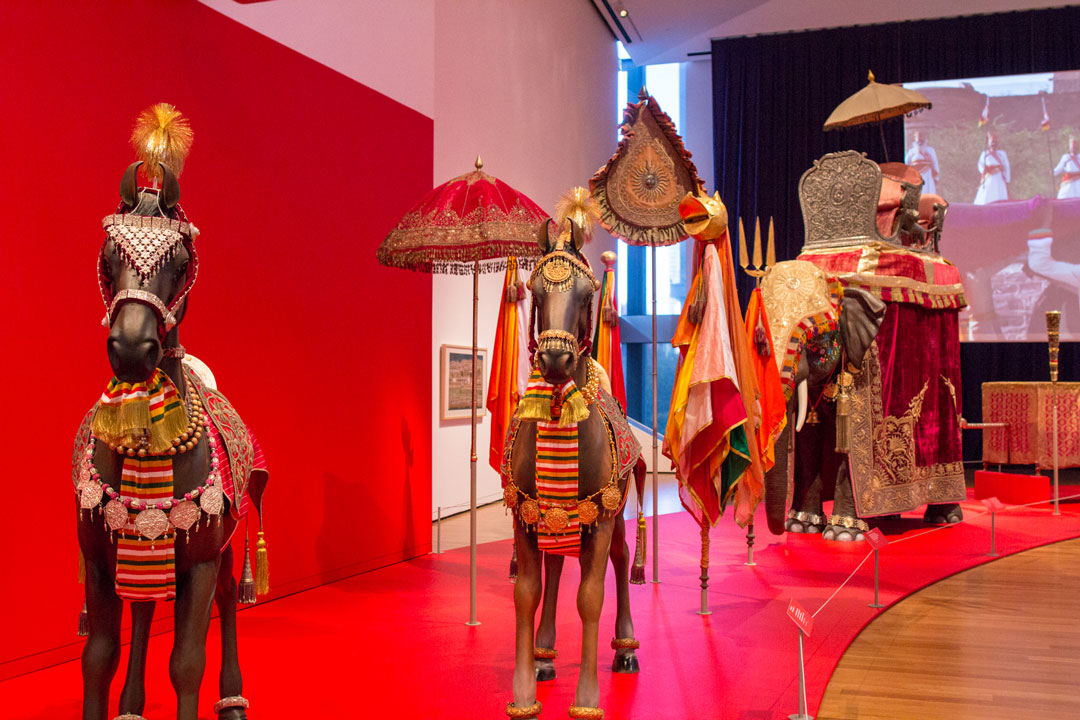 Reads this review by Nalini Iyer for The International Examiner of Peacock in the Desert: The Royal Arts of Jodhpur, India.

“Peacock in the Desert offers Seattle a wonderful opportunity to experience Indian history, culture, and art and will appeal to visitors of all ages.”

And watch Princess Shivranjani Rajye of Marwar-Jodhpur share why she thinks our exhibition is so special.

Seattle Magazine has a great list of event recommendations for the month of December—mark your calendars, buy tickets, go to there.

“I Returned to The Nutcracker as an adult.” Seattle Met’s Stefan Milne watches the Pacific Northwest Ballet’s Nutcracker and floats between its various worlds.

“The display highlights Hendrix’s quintessential experience growing up in the Central District—from a photo of 5-year-old Jimi at a family picnic at Leschi Park to some of his impressive drawings that include what appears to be the Miss Circus Circus hydroplane.”

Mwatana for Human Rights has released a document—titled “The Degradation of History”—that lists 34 archeological and cultural heritage sites that have been damaged in war-torn Yemen.

Artnet reports: “The American sculptor Robert Morris, a shape-shifting artist, `and pioneer of minimalism, has died of pneumonia at an upstate New York hospital. He was 87.”

The New York Times on the just-released report that calls for France to return pieces of African cultural heritage to their home countries; there have already been initial responses from African officials.

“France holds at least 90,000 sub-Saharan artifacts, of which 70,000 are in the Quai Branly Museum. The report estimated that up to 95 percent of Africa’s cultural heritage is held by institutions outside of Africa.”

A compelling piece of post-post-modern video art about those now 7-5 (!) Seahawks. 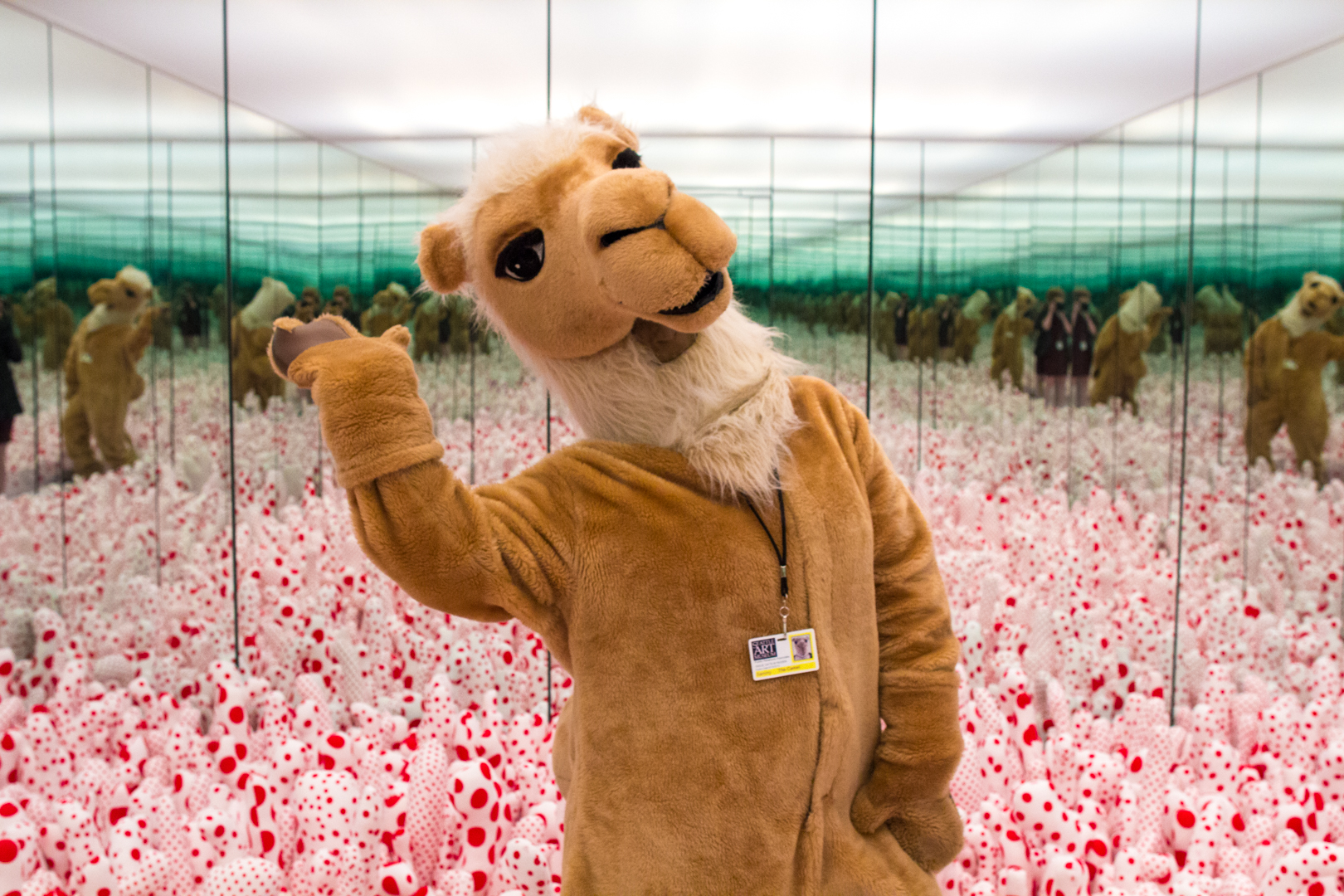 As of today, Yayoi Kusama: Infinity Mirrors is closed! What a wild ride the last few months have been during this blockbuster exhibition. Now we’re looking ahead to Andrew Wyeth: In Retrospect and so is the press. Take a gander at this past week’s press clippings, hand selected by SAM’s PR Manager.

Seattle Times photographer Alan Berner visited during the final days of Yayoi Kusama: Infinity Mirrors and filed this dot-filled send-off. Don’t miss the cameo from our mascot, Sammy the Camel. (Why a camel? Here’s the scoop.)

Love this Seattle Times RAVE for SAM staff: A visitor lauds our “daily, herculean efforts” during the Kusama run. We couldn’t have done it without our awesome visitors!

“’The goal was to show that this unrelenting realist evolved and changed, sometimes quite dramatically, over time,’ Junker says. ‘If you think you know Wyeth’s art from the examples we see reproduced and hanging in the well-known museums, I feel certain you will come away from this exhibition totally surprised.’”

The Seattle Times reports on The Grocery, a new “cutting-edge” arts center in a former—you guessed it—grocery store in Beacon Hill.

This should be an amazing show: The Stranger’s A&P features the sculpture of Humaira Abid, coming soon to a solo show at Bellevue Arts Museum.

The journey continues for the home of Rosa Parks, recently shipped to Berlin and restored by an American artist. The house now has a ticket back home to the US—with an uncertain future ahead.

Poet John Ashbery died on Sunday at the age of 90; did you know he was also a collage artist, who made his solo debut as a professional at the age of 81?

The art of eating: Artsy with seven recipes from artists, including—wait for it—avocado toast (by Salvador Dalí, of course).

Ok, that’s a bit of an exaggeration, but we are challenging TWO different New England museums to wagers on the Super Bowl!

We challenge the Clark Art Institute in Williamstown, MA

Terms:
The loser funds an all-expenses paid vacation to SAM for one of their major artworks. Oh, sorry, that assumes the Clark Art Institute will lose. Well, that seems about right.

Ok, ok. The winner gets the privilege of displaying a major work of art from the other museum for three months. The wagered masterpieces respectively showcase the beautiful landscapes of the Northwest and the Northeast.

At stake is SAM’s majestic Puget Sound on the Pacific Coast from 1870 by Albert Bierstadt from SAM’s American Art collection, which is wagered by Kimerly Rorschach, SAM’s Illsley Ball Nordstrom Director and CEO. In 1870, Albert  painted one of the most stunning subjects of his career: a vision of a stormy Puget Sound. This spectacular, eight-foot-wide view of Puget Sound was the result of the Eastern Seaboard’s newly awakened interest in this faraway region that the artist had visited only briefly seven years before. It’s more than just a landscape painting—it is also a historical work, a narrative of an ancient maritime people, and a rumination on the ages-old mountains, basaltic rocks, dense woods, glacial rivers, and surf-pounded shores that have given the Northwest its look and also shaped its culture.

Conversely, the New England’s West Point, Prout’s Neck (1900), one of the Clark’s greatest works by Winslow Homer, is wagered by Michael Conforti, Director of the Clark Art Institute. Rorschach says, “I am sure that this beautiful Homer painting will be coming to Seattle after the Seahawks defeat the Patriots for another win. We are already making plans to host this incredible work of American art in our galleries so that the 12s can enjoy it.”

Can’t wait to see how good it looks on our walls. Think we saw some staff down there measuring where the nail should go earlier.

We challenge the Clark Art Institute AND the Museum of Fine Arts, Boston, to a TWITTER THROW DOWN

Follow hashtag #museumbowl this Friday, January 30, at 10:30 am (PST) to join in and support our team! On Monday morning, following the game, the losing team’s museum will post a collage honoring five major works from SAM’s the champion’s collection.

Don’t miss the action as we take on basically everyone two museums in this epic Art Bowl XLIX! This week, we are embracing the end of summer with the coming of Labor Day, the return of NFL football, and the end of Modernism in the Pacific Northwest: The Mythic and the Mystical.

Our Super Bowl champion Seahawks return to The CLink in their season opener on Thursday. Whether you’re cheering from the stands or from your living room, stop by the Seattle Art Museum before the game to see Modernism before it closes. The stunning collection of Northwest masters is only on view through Sunday, September 7. 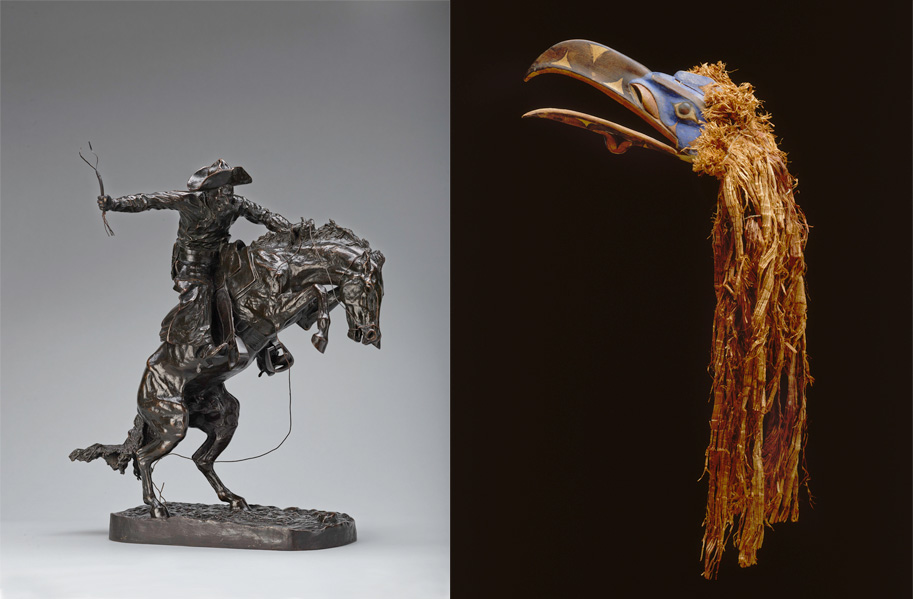 The Super Bowl is a mere six days away (February 2, 3:30 pm PST on FOX). Not only is the 12th man gearing up, but so is the Seattle Art Museum. SAM and the Denver Art Museum (DAM) (everyone likes a rhyming competition, right?) have upped the ante on the outcome of Super Bowl XLVIII by betting temporary loans of major works of art on Sunday’s big game.

The Broncho Buster, a bronze icon of the West by Frederic Remington from the renowned western American art collection at the DAM, is wagered by Christoph Heinrich, Frederick and Jan Mayer Director.

The winning city will receive a three-month loan of the prized artwork. All shipping and expenses will be paid by the city that loses the big game. Dates of the loan are still being finalized.

Here at SAM we are looking forward to showcasing the Broncho Buster. Our visitors will be in for a special treat when they gaze upon the beautiful bronze horse symbolizing the spirit and tenacity of the Wild West. Popular from the time of its creation, The Broncho Buster stands today as an icon of the region and is thought of as the first action bronze of a western hero.

Just for the record, SAM’s “Seahawk” is a Forehead Mask from the Nuxalk First Nation ca. 1880. This Nuxalk mask shows the elegant elongation of the bird beak, a sensitive and human-like rendering of the eye/socket/brow area, with painted embellishments on the surface in black, red and blue. The open mouth suggests the ferocity of this bird of prey, possibly a supernatural “man-eater”. Shredded red cedar bark symbolizes the mythical arena in which the dance-dramas would be enacted.

…It’s too bad that visitors to DAM won’t be able to experience it there, but they can always come visit SAM.