“As an American Egyptian, born and raised in the Middle-East, living in the US, I could see myself reflected in this piece, which is unique for me, because my identity mostly exists in-between spaces.”

Under the unique circumstances of SAM’s closure, our amazing Emerging Arts Leader Intern, Ramzy Lakos adapted the culminating tour of his internship into a video! Go inside Aaron Fowler: Into Existence with Ramzy as he shares his personal approach to understanding and connecting with the large-scale work, “Amerocco.” The exhibition is slated to be on view through October 25, 2020, and we hope you will have a chance to experience it in person once SAM can reopen.

Aaron Fowler’s larger-than-life works are at once paintings, sculptures, and installations. They are made from everyday discarded items and materials sourced from the artist’s local surroundings in Los Angeles and St. Louis, among other places. Items include cotton balls, security gates, afro wigs, hair weaves, broken mirrors, djellabas, sand, broken-down movie sets, found car parts, ropes, lights, and much more.

Emerging Arts Leader Internships at SAM grew out of SAM’s equity goal and became a paid 10-week position at the museum designed to provide emerging arts leaders from diverse backgrounds with an in-depth understanding of SAM’s operations, programming and audiences. 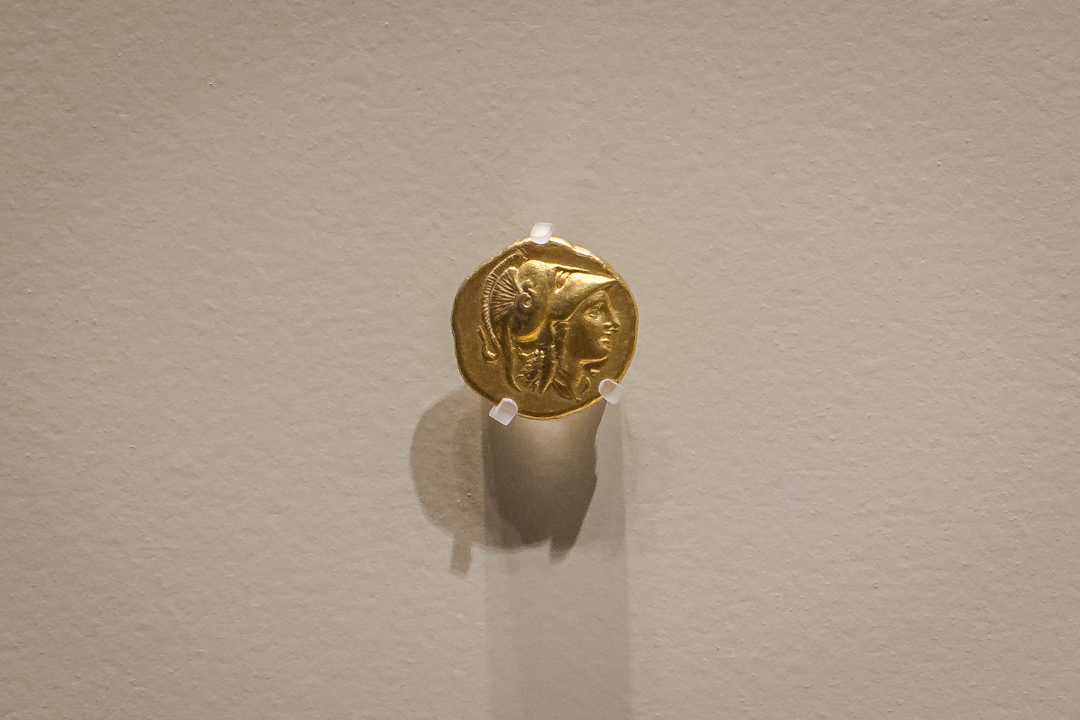 Big and small both have their place at SAM. Touring through the Modern and Contemporary galleries, you might be struck by the visual of Ellsworth Kelly’s Blue Green Red II, conspicuous at over seven feet tall and more than eight feet wide. You’ll have to look much harder to find our Object of the Week in the Ancient Mediterranean gallery.

The Attic stater with Athena in Corinthian helmet and Nike measures slightly smaller than a US dime, at just 11/16 of an inch in diameter. That means you could fit 18,828 of these staters (at .37 square inches) inside the blue and green half-ovals (about 6,966.52 square inches) of the massive Ellsworth Kelly.

Enough about the big and Modern; today we’re looking at something little and old. If you could hold it, the Attic stater would feel very solid and heavy. It weighs 8.52 grams—which doesn’t sound like a lot, but compare it to the US quarter, at 5.67 grams, and the one Euro coin, at 7.5 grams. Significantly smaller, the Attic stater out-hefts them both, and that is because of its density as pure gold.

This coin was struck in the 4th century BCE in the region of the world called Macedonia, then controlled by Alexander the Great. On the front, or obverse, appears the head of Athena, the Greek goddess linked to wisdom and learning. She wears a triple-crested Corinthian helmet that is ornamented with a coiled serpent. The portrait of Athena may be based on her likeness in the monumental bronze sculpture by Phidias that once dominated the Acropolis, Athena Promachos. On the back, or reverse, one would find Nike, whose presence on the coin was meant as a forecast of victory for Alexander’s troops, and Greek lettering that spells out “of Alexander.”

Coinage offers a less-traveled route to understand one of history’s most fascinating people. Alexander the Great’s policies in this area—the new coin types he created, the standards he used, and his impressive list of mints, or production centers—have shown him to be a brilliant economist. His choice to honor the Greek gods Athena and Nike on his coins reflects his well-known admiration for Greece and her culture, but it also seems to have been a political move aimed at flattering Athens, whose fleet Alexander needed for a military excursion to Persia. Alexander, whose father Philip had followed the Thracian standard in some of his coinage, hitched his wagon full to the Attic standard, which was the strongest economically and promised to maintain the flow and value of his monies in the future. This Attic stater was struck at Amphipolis, one of two principal royal Macedonian mints (the other being Pella, the main city in Macedonia). While Philip produced more coinage from Pella, Alexander moved his headquarters to Amphipolis, which had the practical advantage of proximity to the gold and silver mines, importantly increasing wealth in his rapidly expanding empire. 1

1 Charles Seltman, Greek Coins, A History of Metallic Currency and Coinage Down to the Fall of the Hellenistic Kingdoms, London: Methuen, 1955; 204-207.