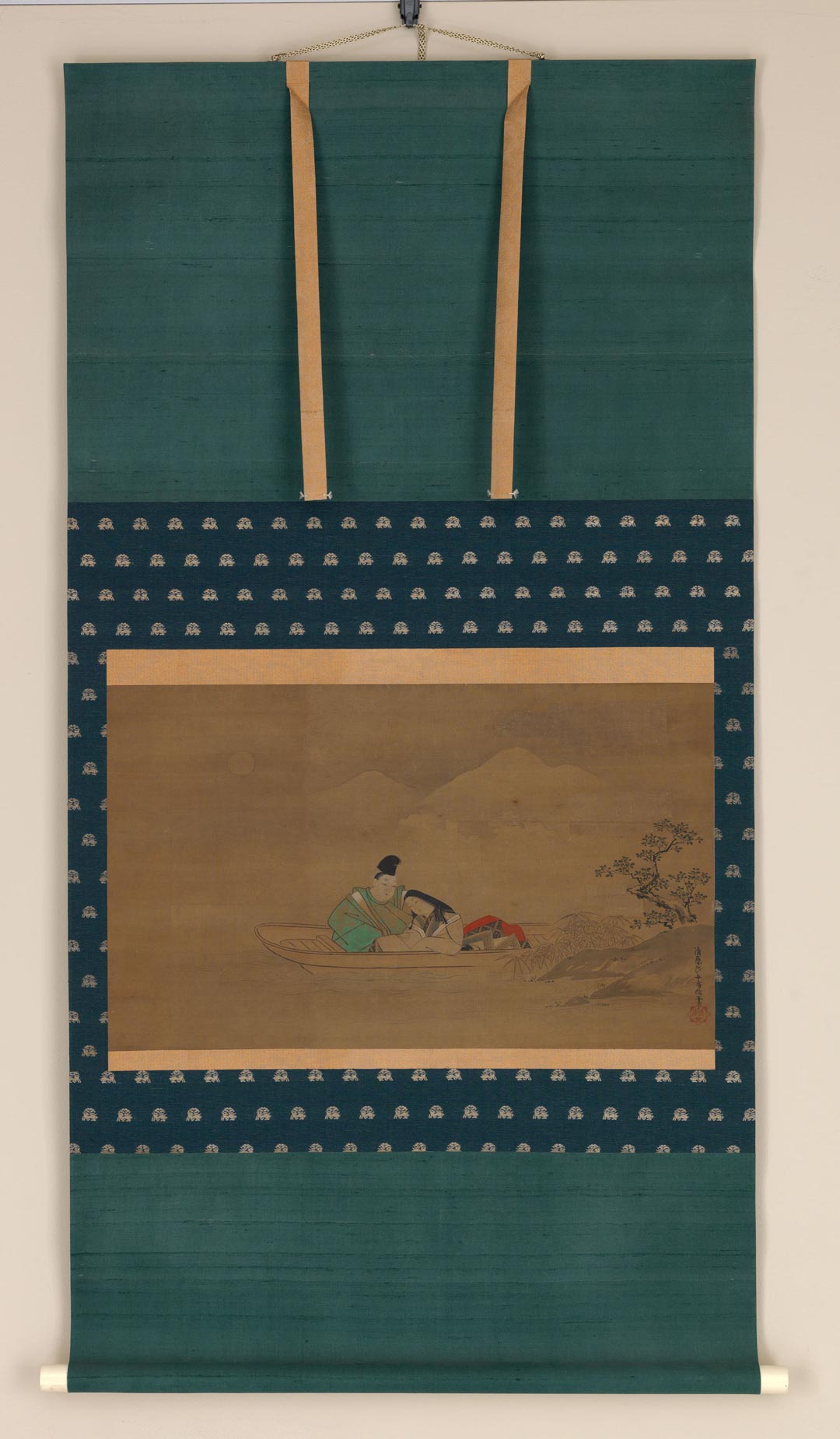 Intrigue, deception, mistaken identity, and overlapping love triangles carry Chapter 51 of the Tale of Genji to the heights of drama. Caught in between a love for two suitors who could not be more different, except in their indefatigable adoration for her, Ukifune struggles to discover where her heart truly lies. On the one hand, the prince Niou is handsome and charming, but impetuous and inconstant. On the other, the general Kaoru is understated and sensitive, but formal and overly mannered. Isolated from society in a remote mountain residence where Kaoru is keeping her, the desired lady is agonized by indecision, knowing that her life depends on a man’s provision. Ukifune, the central character’s name and also the title of this chapter, means “floating boat,” and is suggestive of Ukifune’s state of adriftness.

The scene depicted in this hanging scroll invites us into a rare moment of calm amidst the turmoil. Niou has managed to evade the watchful eyes of Kaoru’s guards, and has absconded with Ukifune in the middle of the night, to a boat that will take them to a place across the river Uji where they can be alone. Under the gaze of the winter moon, the couple drifts through silent mists and icy waters towards the other shore.

“Without a word, he took Ukifune up in his arms and carried her off. Jijū followed after and Ukon was left to watch the house. Soon they were aboard one of the boats that had seemed so fragile out on the river. As they rowed into the stream, she clung to Niou, frightened as an exile to some hopelessly distant shore. He was delighted. The moon in the early-morning sky shone cloudless upon the waters. They were at the Islet of Oranges said the boatman, pulling up at a large rock over which evergreens trailed long branches.”[1]

The artist, Kiyohara Yukinobu (1643-1682), was one of only a few known women artists permitted to publicly practice her craft in Edo-period (1603-1868) Japan. Yukinobu lived in Kyoto and was likely trained by her father in the tradition of the Kano school. Celebrated for her exacting brushwork and meticulous detail, Yukinobu was also known for her portrayals of legendary women of history. The Tale of Genji, said to be the first novel, was written in the eleventh century by a female writer, Murasaki Shikibu. In another hanging scroll by Yukinobu titled Murasaki Shikibu Gazing at the Moon, the author is captured in the process of drafting Genji.

This moment of passage across the nighttime waters is one that has drawn many artists across the centuries, but Yukinobu’s approach is unique. In the text, the couple are accompanied by a boatman and an attendant, but Yukinobu has chosen to depict them alone, sharing a private embrace. The artist may have been thinking of an exchange earlier in the chapter:

“Niou sent for an inkstone. He wrote beautifully, even though for his own amusement, and he drew interesting pictures. What young person could have resisted him? ‘You must look at this and think of me when I am not able to visit you.’ He sketched a most handsome couple leaning towards each other. ‘If only we could be together always.’ And shed a tear.”[2]

We can compare Yukinobu’s interpretation to that of one of her seventeenth-century near-contemporaries, Tosa Mitsuyoshi, in his five-volume set of handscrolls depicting scenes from the novel. Mitsuyoshi chooses the same scene, but paints Ukifune and Niou sitting apart, looking away from one another, rather than locked in a warm embrace. We are positioned with a bird’s eye view of the couple, and Niou’s back faces us, effectively excluding us from any intrusion we might make on the couple’s private escape. In contrast, Yukinobu encourages us to share this moment that is at once blissfully serene and full of anxious uncertainty. Our view is unobstructed, our gaze unfettered; we see deeply into the emotional state of each of the vessel’s passengers. We are immersed in the scene, traveling invisibly alongside Ukifune and Niou, and are invited to contemplate the tender stillness of time’s passage. 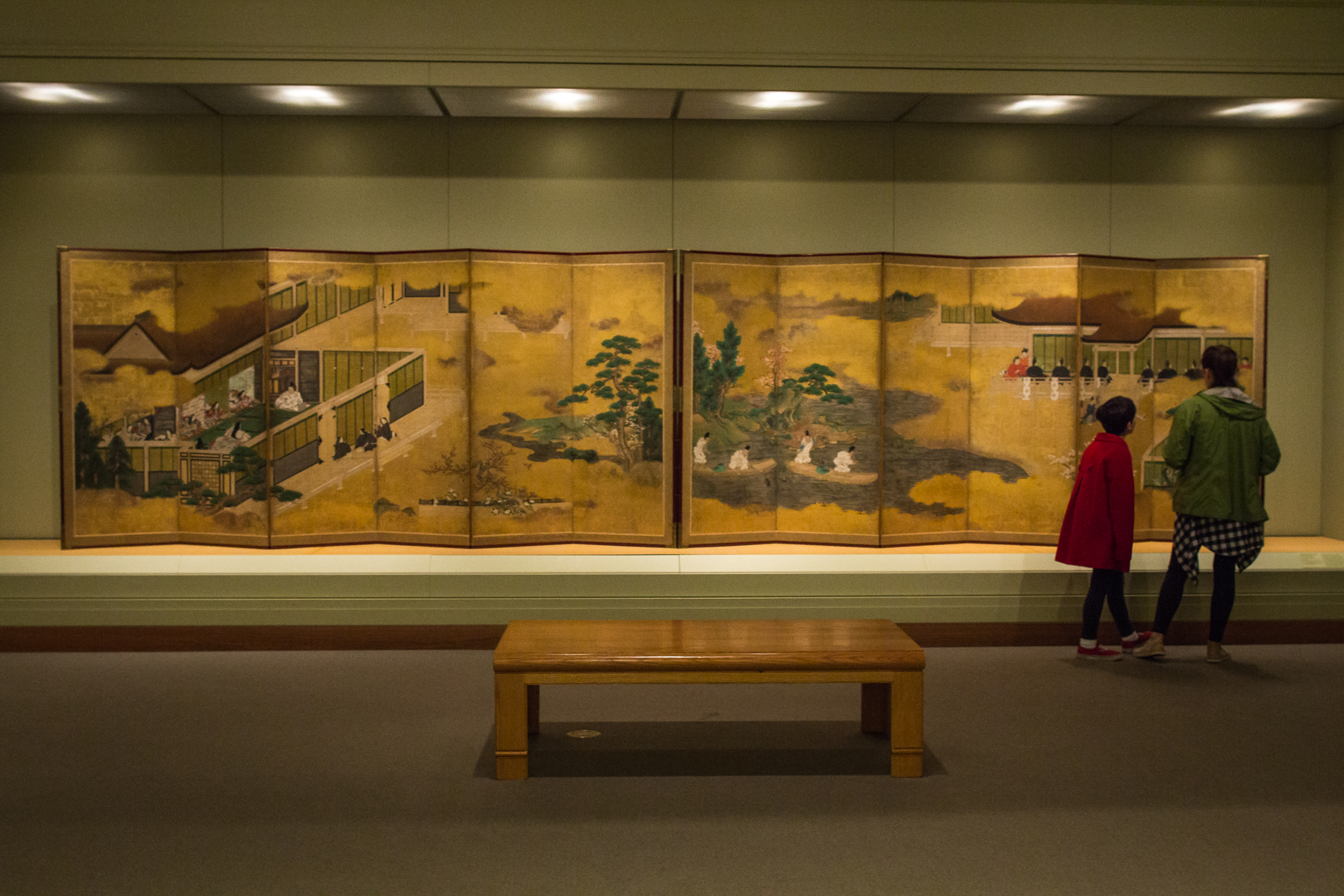