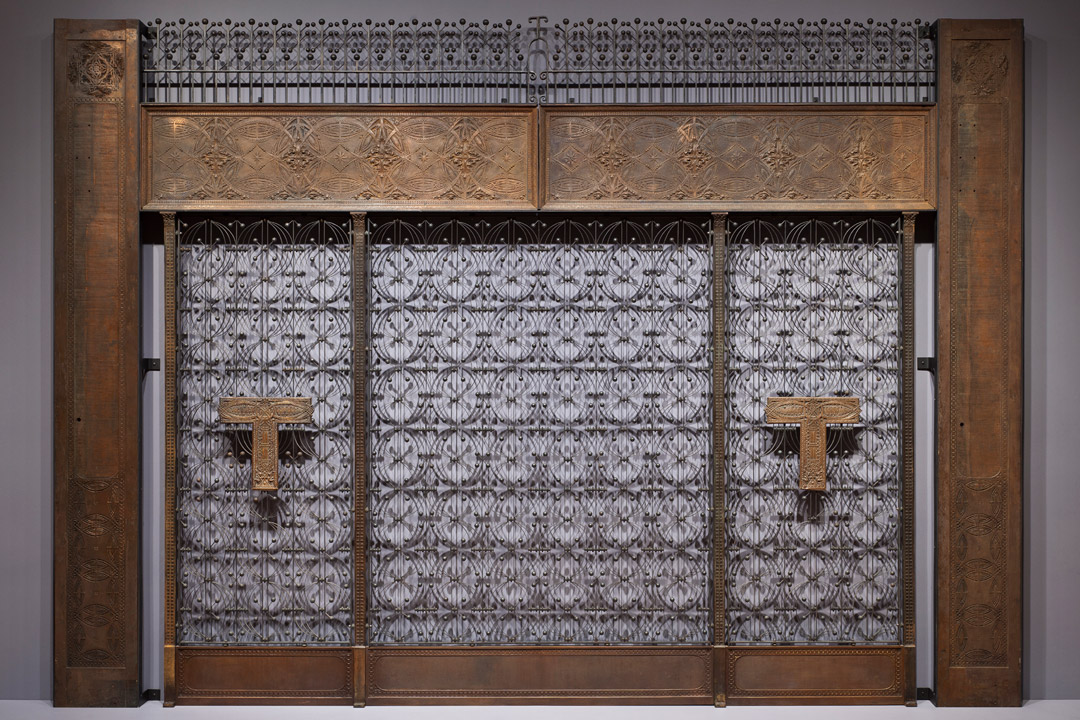 The unfortunate thing about clichés is that they disguise the nuance of truth. When we remember Louis Sullivan, we whip out the phrase “form follows function” and, by doing so, suggest the famed architect as a harbinger for a minimal style of building, one that came to define the modernist movement in architecture. SAM’s Elevator screen from the Chicago Stock Exchange shows Sullivan, instead, as a master of creative ornamentation. What gives?

Sullivan often gets the epithet “father of modern architecture.” His legacy might be a bit misunderstood by some. His most famous quote derives from an essay so drily titled that it’s a wonder anyone ever read it: “The Tall Office Building Artistically Considered.” It’s actually very dramatically written. He spells out his purpose for the treatise in a masterful passage of overblown rhetoric, posing this rhetorical:

“Problem: How shall we impart to this sterile pile, this crude, harsh, brutal agglomeration, this stark, staring exclamation of eternal strife, the graciousness of those higher forms of sensibility and culture that rest on the lower and fiercer passions? How shall we proclaim from the dizzy height of this strange, weird, modern housetop the peaceful evangel of sentiment, of beauty, the cult of a higher life?”1

In what follows, Sullivan lays out his philosophy on architecture. First of all, we find that, for Sullivan, “form” most closely meant ornamentation. So when he says “form ever follows function,” he means something like “ornamentation comes after use.” He is not saying that form (ornament) doesn’t matter—a misinterpretation that led many to understand him saying decorative elements were unnecessary. Sullivan’s approach was to address function first, and then get creative with the form, “to proceed step by step from general to special aspects.”2 How did he come to this conclusion? Everywhere in nature, he says, the essence of a thing is reflected by, and embodied in, its shape.3 Efficient shapes make for sensible things that work well and survive. Are we arrogant enough to go against what’s natural and sensible? For, Sullivan proclaims, “It is the pervading law of all things organic and inorganic, of all things physical and metaphysical, of all things human and all things superhuman, of all true manifestations of the head, of the heart, of the soul, that the life is recognizable in its expression, that form ever follows function. This is the law.”4

First things first, Sullivan argues: Let’s get the use right, and then, working from that base, let’s have fun making it look good. With the Chicago Stock Exchange building, a fine example of a “tall office building” of the late 19th century, Sullivan brought his ideas to fruition. He saw the chief characteristic of skyscrapers, as we know them, as being “lofty”: “The force and power of altitude must be in it.”5 We see that power in the tall and commanding screen that has a strong presence in SAM’s American art galleries. In ornamentation, too, we see Sullivan’s philosophy at work: The geometric shapes that decorate the grill, futuristic-looking circles and spheres, were actually made to represent seed germs for this, the nation’s largest agricultural stock exchange. There’s an important place for ornamentation in Sullivan’s design. The details just had to be smart, and they had to fit.