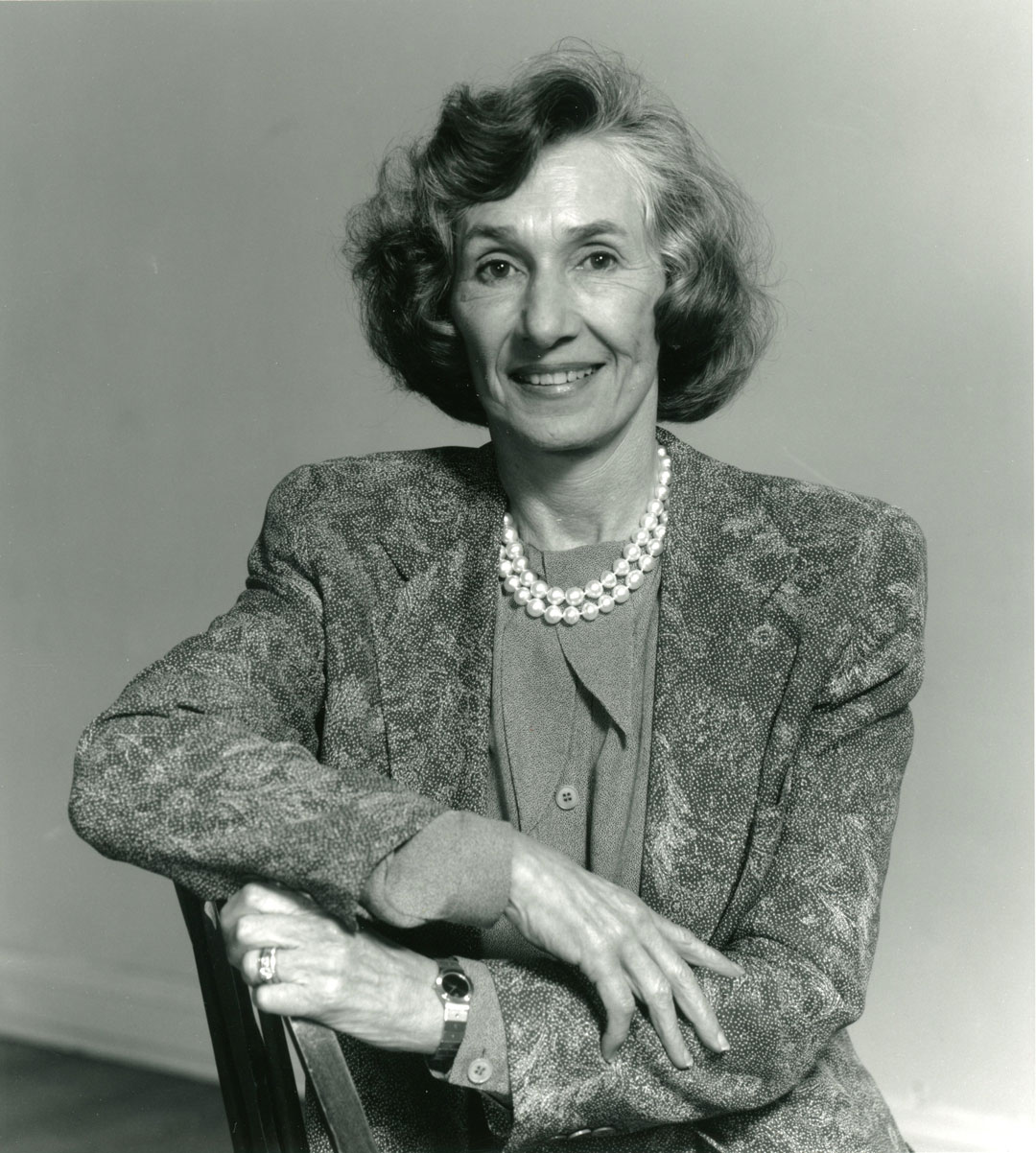 With a heavy heart, we share the news of the passing of Virginia Wright, a pillar of the SAM family. Virginia and her late husband Bagley played pivotal roles in the development, vibrancy, and accomplishments of the Seattle Art Museum for more than half a century. Beyond being generous contributors, the Wrights’ greatest impact on SAM is seen in the art of the collection and in the art shown. Virginia was among a very small group of people who, in the 1960s, pushed SAM to create its first modern and contemporary art program. Virginia and Bagley also contributed to the purchase of many important acquisitions over the years. Above all else, the Wrights amassed one of the most important collections of modern and contemporary art in the world (over 200 works), all purchased with SAM in mind as the collection’s eventual home. When the bulk of it came to SAM in 2014, forming the backbone of its modern and contemporary collection, SAM was transformed from a great institution into a truly remarkable one.

Earlier this month, Virginia said, “When I think about the future of the Wright Collection at SAM, I put my trust in the artists. I trust that future generations will value their work, that SAM will continue to provide meaningful access to it, and that the conversations that their work has inspired will continue.” We are honored by her faith in Seattle’s museum and, because of her support over the last 60 years, we are confident that we can live up to the legacy she established.

Born in Seattle and raised in British Columbia, Virginia went East for college and majored in art history. Out of college, she worked for Sidney Janis Gallery in Manhattan and began collecting art. Mark Rothko’s abstract painting Number 10 (1952) was one of her early, daring purchases and it is now part of SAM’s collection.

Virginia has been a SAM member since 1951. She began docent training in 1957 and led her first public tour in 1959. In 1959, the Wrights made their first-ever gift to SAM’s collection: Room with White Table (1953) by William Ward Corley. That year they also provided funding for SAM to acquire Winter’s Leaves of the Winter of 1944 (at the time titled Leaves Before Autumn Wind) by Morris Graves.

In 1964, she and a group of friends persuaded then-director Richard Fuller to let her start the Contemporary Art Council (CAC), a group of collectors at the museum. For the next decade, it functioned as the museum’s first modern art department. The CAC sponsored lectures and supported the first exhibitions of Op art and conceptual art in Seattle. It also brought the popular Andy Warhol Portraits exhibition to Seattle in 1976, among many other important exhibitions. Her role in bringing great art to the Seattle Art Museum also involved the curation of two solo exhibitions for Morris Louis (in 1967) and William Ivey (in 1975).

Virginia joined SAM’s board in 1960, making 2020 her 60th anniversary with the Seattle Art Museum. She temporarily stepped away in 1972 when her husband Bagley joined the Board and rejoined in 1982. She served as President of the Board from 1987–90. Virginia was President of SAM’s Board of Trustees from 1986–1992, years that coincided with the construction and opening of the downtown Robert Venturi building in 1991—the museum’s first major transformation since its opening in 1933 and a major shift in Seattle’s cultural life to downtown First Avenue (with the Symphony soon following).

When the Seattle Art Museum opened the Olympic Sculpture Park in 2007, many works from the Wrights’ collection were installed there, including Mark di Suvero’s Bunyon’s Chess (1965) and Schubert Sonata (1992), as well as works by Ellsworth Kelly, Tony Smith, Anthony Caro, and Roxy Paine.

SAM’s ongoing exhibition Big Picture: Art After 1945 draws from the Wrights’ transformative gift of over 100 works and is a reminder of their incredible generosity.

Virginia was an active board member up to the end of her life, regularly attending meetings and advising the museum in many important endeavors. About SAM Virginia said, “It’s always been the main arena. I never wanted to break off and start a museum. I wanted to push the museum we already had into being more responsive to contemporary art.” And SAM would like to acknowledge that she did just that, leaving an undeniable mark on the cultural landscape of the entire Pacific Northwest.

As Amada Cruz, SAM’s Illsley Ball Nordstrom Director and CEO, says, “Even having only been in Seattle for a short time, it’s clear that Virginia Wright’s impact on the city and on SAM is beyond measure. Her legacy, and that of her late husband Bagley, is seen in both the very walls and on the walls of the downtown museum, and it fills the Olympic Sculpture Park’s landscapes. I’m honored to have been able to know her and of her hopes for SAM’s continued future.” 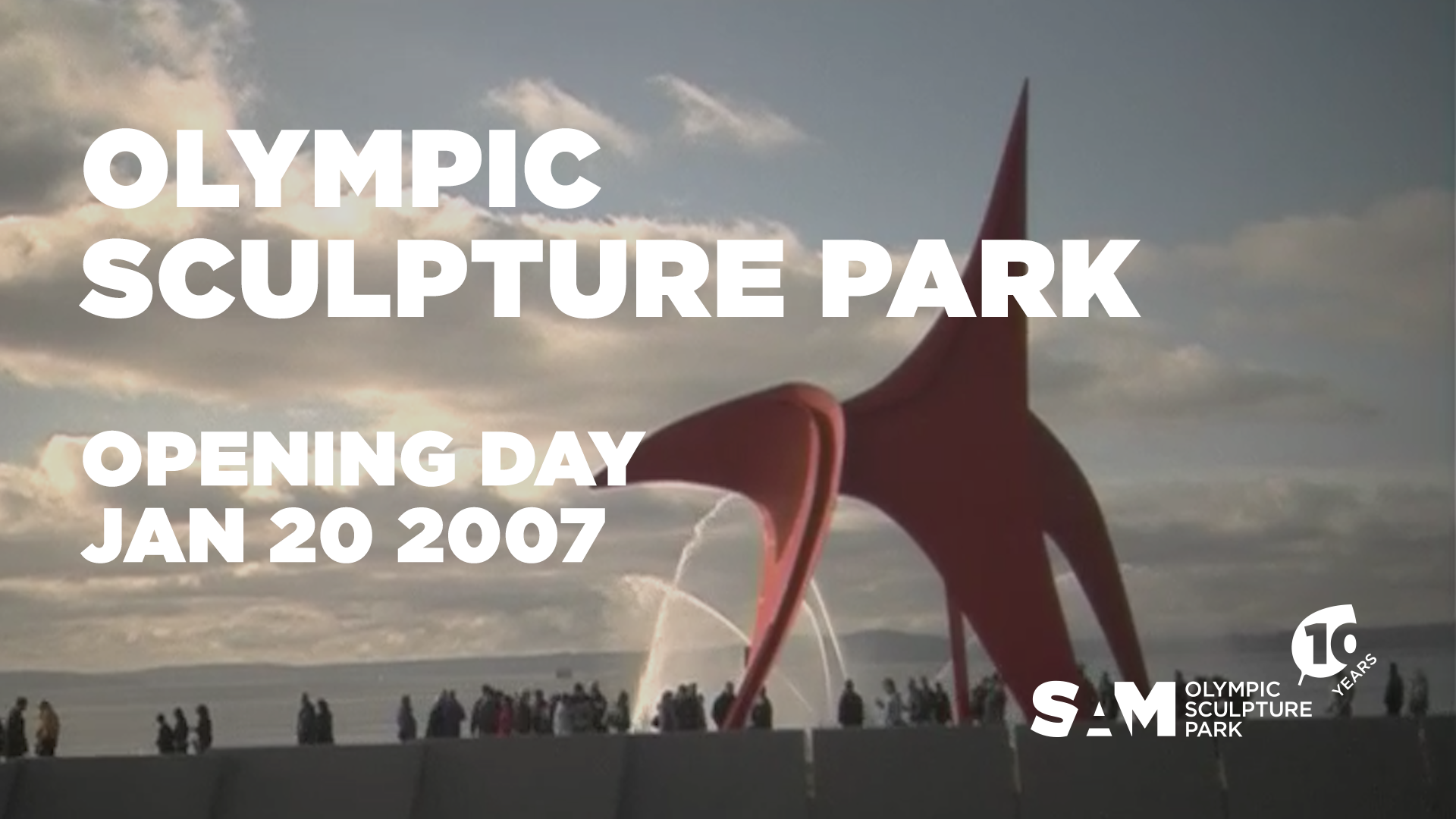 “How does art come into being? Out of volumes, motion, spaces carved out within the surrounding space, the universe.” –Alexander Calder

Read these words on the silver plaque as you stand beneath Calder’s The Eagle, in the Olympic Sculpture Park, and they resonate deeply. The bolts and bends in its blazing, red steel prompt you to envision the way its parts came together in the artist’s mind. This year, as we celebrate the 10th anniversary of the Olympic Sculpture Park, Calder’s words become especially poignant. Looking out at the park and the surrounding slices of Seattle framed by The Eagle’s wings and legs—the art, the land, and the architecture—we are reminded of the way people came together to build this unique green space in the downtown corridor.

The park’s true beginnings go back to 1996, when SAM trustee, collector, and arts philanthropist Jon Shirley saw the potential for something greater. “My late wife Mary and I were looking at our outdoor sculpture collection around the yard of our home and wondered where it might end up one day. . . . As collectors, we visited many sculpture parks around the world and thought, why not here?”

They shared their idea with arts benefactors and SAM trustees Virginia and Bagley Wright, as well as SAM’s Director from 1994–2009, Mimi Gardner Gates. Later that year, Gates brought those conversations with her on a fly fishing trip in Mongolia with a group of twelve women, where she got to know Martha Wyckoff, volunteer and national board member at the Trust for Public Land. Following a helicopter crash that left Gates, Wyckoff, and the rest of the group unharmed but stranded in the steppes of Mongolia, the two women found themselves discussing a mutual interest in civic engagement that spoke to the aspirations of both organizations: free, public green spaces and art for Seattle’s community. As Martha Wyckoff explained, “Community can include everyone in Seattle and anyone who comes to visit. As we developed the project, we realized it also included the salmon, and the plants, and the future, by making sure there’s more green, natural settings in the downtown core for all to enjoy. Where else has a major city art museum created salmon habitat in partnership with a national nonprofit land conservation group?”

After Gates and Wyckoff returned to Seattle, they began discussing possible sites, along with the Shirleys, the Wrights, and Chris Rogers from the Trust for Public Land, who went on to manage the sculpture park project on behalf of SAM. Rogers and Wyckoff had been mapping park possibilities in King County for over a year and kept coming back to a strip of land on the waterfront beside Myrtle Edwards Park. Still contaminated by its former life as a site for petroleum storage, the space was far from inspiring. Yet, when the team visited, something sparked. Gates explained, “It was much lower, it was fenced in, and people were living on the edges. Plus, it had a railroad track running through it. . . . Jon [Shirley] was particularly visionary in terms of really being able to see what it could be. I was very enthusiastic about the idea of space on the waterfront that was open and free. And so, we started running.”

The Trust for Public Land was familiar with brownfield restorations from their previous projects, so they took the lead on the complex negotiations required to acquire and clean up the site. But the park as we know it fully came to be through architects Marion Weiss and Michael Manfredi’s submission to a competition for its design. Gates explained, “We didn’t have a set vision until Marion and Michael presented their plan. Their design went over the road and the railroad tracks, incorporating and integrating the infrastructure of the city into the park while creating a space that was tranquil, quiet, and a place you wanted to be—that vision was critical to what the park has become.”

During the years that passed since the park opened on January 20, 2007, the sculptures, the design, the plants and all of the activities that happen among them have become embedded into the city that has grown around it. Skyscrapers bloom around the thick carpet of green and open span of sky while hundreds of container ships and ferries, otters and seals, pass through the Puget Sound below. When you scan the downtown skyline from the West Seattle shore, between CenturyLink Field’s white arches and the Space Needle’s hovering disc, the park’s patch of green and The Eagle’s spot of red stand out, too. Inside the park, a universe of sorts was carved, by two organizations and many individuals—a universe that continues to be shaped by Seattle itself.

In the months ahead, we will continue reflecting on the Olympic Sculpture Park’s history with an in-depth look at the permanent and temporary works of art, the landscape, the programming, and more. We hope our memories of the last 10 years bring to mind some of your own and, even better, that you’ll visit in 2017 to create new experiences during the park’s 10th year. 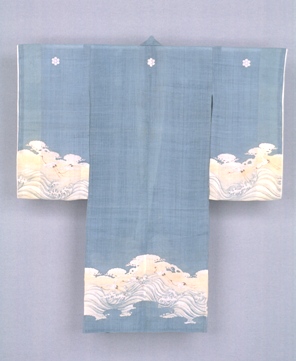 Symbolizing longevity, the traditional motifs of cranes in flight and pine trees are interpreted in an innovative manner on this child’s kimono. Set against a turquoise background, pine trees appear above and below the waves as silhouettes created by the playful use of color and negative space. Against the pine tree border, brightly-colored cranes soar above the swelling wave pattern. Delicate, calligraphic lines of ink emphasize the graceful bodies of the flying cranes.

On Monday, July 18, Bagley Wright passed away. Among his many acts of generosity for the Seattle arts community, Mr. Wright and his wife Virginia have donated hundreds of works of art to the museum’s permanent collection over the past six decades, including this kimono. We mourn the passing of this great friend.