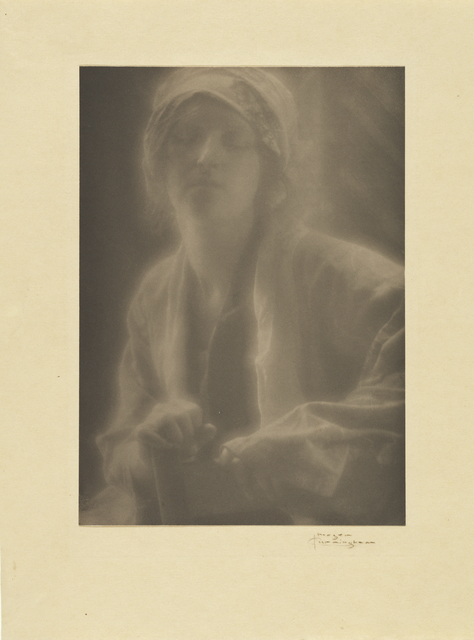 In this soft-focused black and white photograph, a woman is visible from the waist-up. She sits in three-quarter profile and wears a loose, white robe which emphasizes her pale skin. This woman, who glows in contrast to the dark, hazy background which surrounds her, is miniaturist painter Clare Shepard.

Imogen Cunningham photographed her friend, Shepard, at the peak of the pictorialist movement. This movement saw photographers approach cameras as a tool—similar to a paintbrush—that made an artistic statement. Rather than capturing the real, pictorialism emphasized the beauty of a subject and an image’s composition.

In this audio recording produced by the J. Paul Getty Museum, Chris Johnson, chair of the photography department at the California College of the Arts, considers the pictorialist approach Cunningham took in creating The Dream (Nei-san-Koburi) and the romantic feelings it relays. Listen to this and the rest of the audio tour when you visit Imogen Cunningham: A Retrospective at our downtown location as part of the exhibition’s free smartphone tour.

Chris Johnson: It’s a kind of a classic, romantic, pictorialist image of a young beautiful woman.

Narrator: Chris Johnson, chair of the photography department at the California College of the Arts.

Chris Johnson: You can see that Imogen is very sensitive to the falling of light and shadow over this young woman.

Narrator: The atmosphere around her, seems to glow. Diffused light falls on her headscarf and the folds of her painter’s smock. Her eyes are half closed, as if in a trance. The close framing of the portrait keeps the background abstract. The subject is Clare Shepard, a friend and miniaturist painter.

Chris Johnson: Imogen, in her heart of hearts, was really a romantic and a romantic takes her feelings very seriously so her feelings as she was projecting them on to this young woman are pretty clear.

Narrator: The otherworldly portrait hints at Shepard’s rumored abilities as a clairvoyant. The image exemplifies pictorialism, an approach that prioritized beauty and expressiveness, composition and atmospheric effects. The movement rejected the realistic, documentary nature of photography and instead looked to painters as artistic influences.

Chris Johnson: One of the ideas behind the pictorialists was that you would use the soft-focus technique as a trope to indicate dreamy, romantic, ethereal, spiritual qualities. She’s catching this moment when Claire is lost within thought and it intends to try to draw us into the mood space that she’s occupying using pictorialist soft-focus as a formal strategy.

Narrator: When Cunningham took this portrait around 1910, Pictorialism was at its peak. Cunningham had recently opened her own studio in Seattle after studying photographic chemistry in Germany. The photograph marked a specific, early period in her career.

Chris Johnson: All of her photography subsequent to this phase is in marked contrast to the visual effects of this image.