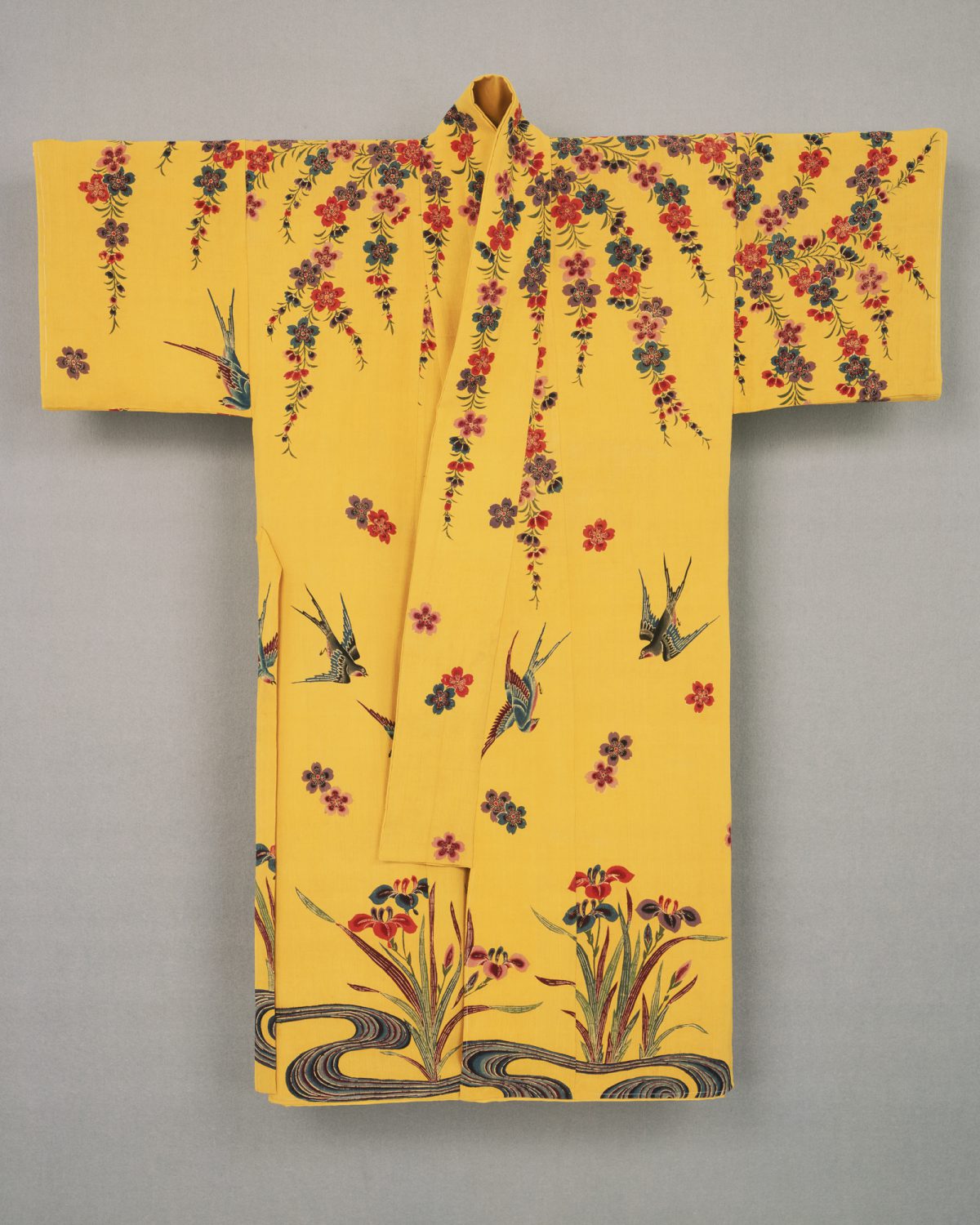 This show-stopping bingata robe comes from Okinawa, the southernmost islands of Japan. With brilliant colors and a rhythmic pattern of cherry blossoms, swallows, irises, and flowing water, it is descended from an important textile tradition. See if you can spot it during your next visit to the Asian Art Museum, which reopens to the public at the end of May.

Bingata textiles are created with a paste-resist technique using either stencils or freehand motifs. The name refers to this process, not to the fiber or weave of the textile itself. This bingata robe is made of silk, but cotton and ramie were also used as a base. In paste-resist dyeing, a thick, water-soluble paste is applied to a textile in order to keep pigment or dye from coloring selected areas. For bingata, this paste is traditionally made from a cooked rice flour mixture. When the paste is dry, multiple layers of pigment are then brushed onto the open areas with thick, short brushes. Once the pigment has dried, the resist paste is washed away but the color remains. The process can be repeated many times to create detailed designs of many colors.

Okinawa was an independent kingdom known as Ryukyu until it was formally annexed by Japan in 1872.  In 1879, Japan’s central government abolished the Ryukyu monarchy and renamed the region Okinawa. Under the Ryukyu monarchy, the production and consumption of bingata was tightly connected to the royal court. Expensive and labor-intensive, bingata was reserved for members of the monarchy. Family workshops, patronized primarily by the royal family, produced bingata from start to finish. The large-scale pattern and yellow ground of this striking robe are characteristic of the garments worn by the highest-ranking members of the Ryukyu royal family.[1]

When the Ryukyu monarchy was abolished, bingata was in danger of disappearing. Without the patronage of the royal family, bingata production collapsed. In the following decades, increasing popularity of western-style dress and the violent conflicts of World War II (some of which occurred on Okinawa) further diminished interest in traditional textiles like bingata. After World War II, descendants of bingata family workshops worked to revive the craft. The patterns of bingata were applied to objects other than garments, including folding screens, greeting cards, calendars, and placemats. Today, Okinawan makers apply the colors and patterns of bingata to a range of garments and accessories in an expression of regional identity.