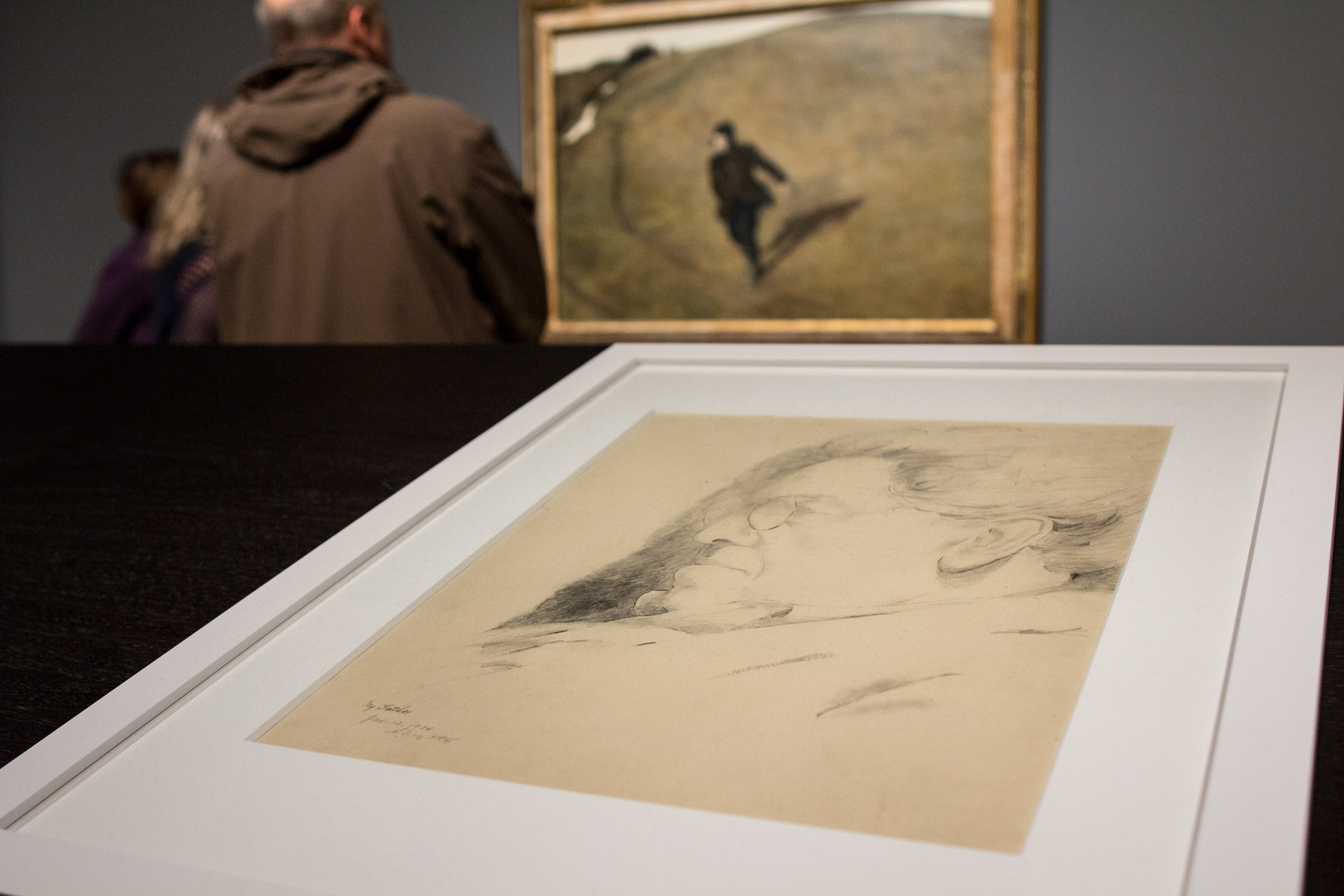 “He’d look at me like a Brahman bull when he walked in the door to criticize my work, and if he was glowering, I braced myself. In a few incisive words he’d bit right at some puny characteristics in my nature.”
– Andrew Wyeth

This unfinished sketch is the only portrait Andrew Wyeth ever made of his father, an imposing figure in the story of Andrew’s life. Newell Convers (N.C.) Wyeth was an accomplished illustrator with strong opinions. At 19 Andrew made this pencil portrait. The challenge of drawing the man who was not just father but also Andrew’s teacher and toughest critic must have been daunting. Though small in size, the portrait nevertheless conveys a looming figure. In life, N.C. Wyeth was domineering; in death, he haunted his painter son to the end of his life. Wyeth always regretted that he never painted his famous father before the man’s tragic death in 1945.

“The boy was me at a loss really. His hand, drifting in the air, was my hand almost groping, my free soul.”
– Andrew Wyeth

Throughout Andrew Wyeth’s paintings, the landscape of his neighbors’ farm appears repeatedly. Kuerner’s Hill rears up towards the viewer on occasion and, on others, slopes gradually toward the horizon. At the bottom of this hill are the train tracks where N.C. Wyeth was killed by an oncoming train. A few months later Andrew painted Allan Lynch, the boy who found N.C. Wyeth’s body, running down Kuerner’s Hill. Andrew Wyeth described the sensation of painting Kuerner’s Hill in Winter 1946 by saying that he could almost hear his father breathe. Andrew’s inspiration for the painting came from an afternoon of playing with Allan on Kuerner’s Hill, and yet the ominous and somber tone of the painting indicates the presence of his father in the landscape. “A hump in the earth. Hell—a nice shape, but it reminds you of your father. Where he’s buried.”
– Andrew Wyeth

One November afternoon as he climbed Kuerner’s Hill, Wyeth looked over his shoulder and saw the Kuerner house mirrored, upside down, in the pond below. He worked in vain on a tempera that might recreate that vision. Betsy Wyeth criticized Andrew’s art process for being so meticulous and unable to take advantage of chance effect. Working on this painting, Andrew began changing this when he threw a watery mix of yellow-brown ochre and red-brown sienna tempera across the panel. Never able to escape the internalized critic of his father, you can see the shadow of Kuerner’s Hill cast across the middle of the painting—the shadow of death. This scene would not appear this way in reality because the lake would not be visible in shadow. Here Kuerner’s Hill becomes emblematic of the mournful loss of his father. “A hump like a snow-hill”
– Herman Melville, Moby Dick

There is a lot going on in this painting but in the story Andrew Wyeth tells us about his father, this painting is unique for one small detail. This is the only painting that depicts the train tracks at the bottom of Kuerner’s Hill where N.C. Wyeth died. Titled from a quote taken from Moby Dick about the great white whale, once again Kuerner’s Hill, now covered in snow, becomes a metaphor for Andrew Wyeth’s own nemesis, his father N.C. Wyeth.

See Andrew Wyeth: In Retrospect, on view at SAM through January 15 and learn more about the characters and narratives that dominate the life and art of Andrew Wyeth.