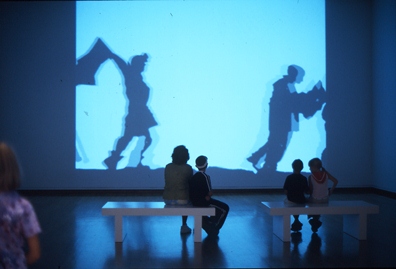 “Things that seem whimsical, incidental, inauthentic may be trusted to provide entry into the heart of one’s material.”

William Kentridge’s raw images prompt our imagination in a way that Technicolor realism cannot.  Shadow Procession is set in a featureless landscape that still manages to reference the streets of a Johannesburg of the past. People struggle to move quickly, but we’re not sure if they are fleeing a menace or simply hurrying home. A cat stretches, an eyeball swivels, an Everyman dictator gestures, and a pair of scissors begins to march. Kentridge’s art thrives on ambiguity and unresolved endings.