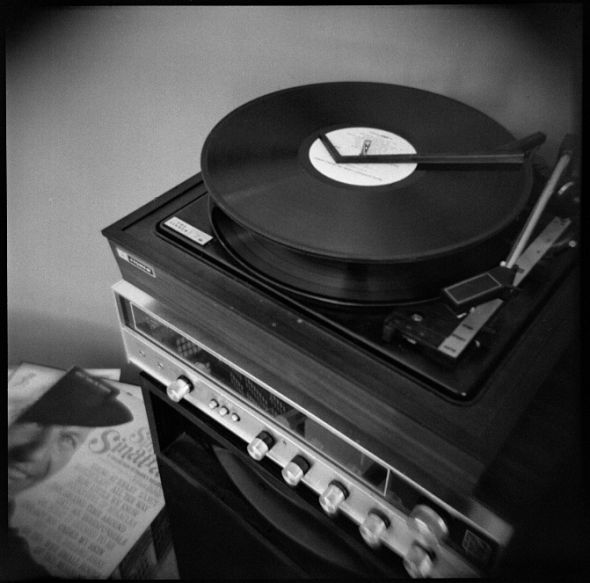 I’ve had many conversations about the supposed “comeback” of vinyl records throughout my time interning at the Theaster Gates: The Listening Room installation and the Seattle Art Museum Record Store project that was located in Pioneer Square from December 13, 2011 to January 31, 2012 . Being from a younger generation who came of age in the last decade or so, it’s interesting to be engaged in these conversations with people of all generations.  It’s as if a reawakening to the objects of records has struck contemporary culture into a jolt of nostalgia and remembrance. People of older generations have expressed sudden excitement to get all their friends to go down into their basements or open closets and shuffle through boxes of old records.  This is exactly what we interns did to relocate the 2,000 or so records owned by Bernie Hall to our Record Store; his collection makes up over half of the records included in the Record Store project. It’s as though these objects are buried treasures from long ago, or perhaps tokens of a forgotten past among old metal keys, old photographs, or old newspaper clippings. These records are time capsules of cultural history and each record collection reflects the owner’s personal relationship to this past, their own path through history.

Many in my generation started by discovering records from someone else’s collection before we got into buying our own. In growing up shuffling through our parents’ records, we established a new kind of relationship with these vinyl objects. This younger generational relationship to records is about learning our cultural history through listening to these material recordings of the past, but this is a past we haven’t experienced ourselves. We discovered record albums’ significance to past and present culture through not only listening to their innovative sounds but through the storytelling and literature glorifying the weight these iconic albums hold. From our engagement with these time capsules, our own creation and collection of musical taste developed into the colorful complexity that is contemporary music and culture.

I’ve grown up during the era of post-modern reflection and recycling of past pop-culture. Every decade in the 20th century has its own style and culture and the music of each decade sets the tone of attitude behind the decade’s style of pop-culture. Ordinary objects are stylized by colors, patterns, typefaces, and graphics. I grew up loving the adventure in discovering objects that embody the style of particular decades.  I established a permanent love for ‘thrifting’, or object-seeking. I always search for records because they are objects with more than just style; the music narrates ideas and moods of a cultural era and the album cover, through visual design, embodies a link to cultural ideas and moods of a period. Often “thrifters” of my generation have an interest in the era our parents grew up in, and in the exchange of styles from decades before and after. Though records have been reinterpreted as an aesthetic phenomenon, they never lost their historical relevance; their quality and influence continue to inform contemporary culture.

Both collecting the material object and the activity of playing records on a record player are seen as an aesthetic art.  In owning physical records, you accumulate a collection that expresses a certain knowledge of aesthetic taste and historical knowledge.

Though not every kid I knew had their own record player, they most likely had someone in their family, if not their parents, who had an appreciation and insight to the timeless quality of vinyl sound and of the quality in the activity of playing a record. There is an art to slowing down and appreciating the music and design of a record, both in exploring the cover and sleeve design, and in setting up the stylus and sitting back to soak up the highest quality analog sound to come from a piece of physical material. It takes patience and agility to gently set up the record player and continuously attend to the player to keep the music playing.  My generation grew up defining this experience as cool, sophisticated and well-cultured.

So why the noise about a reawakening and resurgence of an object never really lost of appreciation, let alone lost from sight? Maybe it has something to do with our day and age of uncontrolled digital information exchange and virtual experience of media and culture. The preciousness of a physical material object which holds memories and creativity on record, a vinyl record….this is a treasure that younger generations have rediscovered and desire to collect for their own study of our historical past. Studying these objects allows new generations to impact their own creative intentions by reflecting on and overtly referencing iconographic records. This isn’t a ‘comeback,’ it’s a reinterpretation of these iconic objects that embody music which will always be relevant to future creative culture.